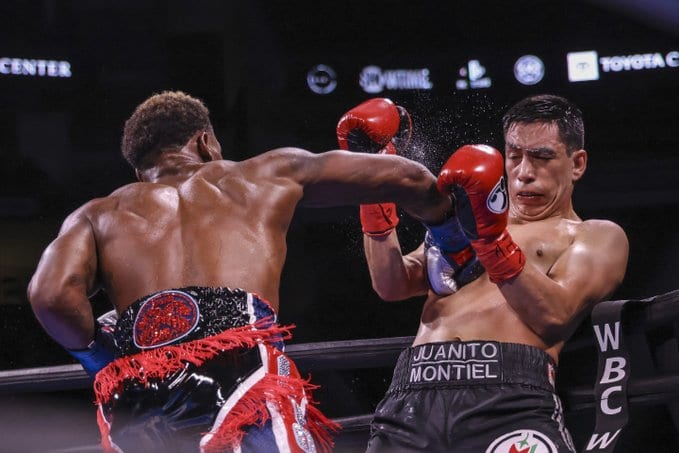 Defending his WBC Middleweight title in front of his hometown Houston fans, Jermall Charlo wanted to deliver an exciting performance and, while he didn’t get a KO, he was dominant from beginning to end in a 12 round decision win.

Making the fourth defense of his World Championship against a game, Mexican Juan Montiel at the Toyota Center downtown, Charlo won almost every round impressively. This, as the final judges scores reflected the one sided affair at 120-108, 119-109 and 118-09,

Charlo was in the ring for the first time since his dominant 12 round win over Sergey Derevyanchenko in the Mohegan Sun Casino in Connecticut last September.

With the home crowd cheering him on, Charlo, now 32-0, out-landed Montiel 258-127, but the challenger should be credited. This, as he repeatedly took Charlo’s best punches and would fire back with some left hooks to the head and body stopping the champ in his tracks at times.

Still, starting with a barrage early in the 5th round that backed Montiel in the corner, Charlo continued score punches in bunches early in rounds. Charlo’s best weapon was his lead right. He also scored with left hooks to the body and to the head.

Charlo did suffer the first cut of his career coming over his right eye in the eighth round. However, his corner did a good job of stopping it from being a factor. Charlo finished strong by repeatedly scoring with big punches in the late rounds.

It was the first time Montiel had ever been past the 10th round in his career.

I never got concerned. The best fighters in the world make the best adjustments…. I’ve never been cut. He put in the work to fight me.

I seen the crowd behind me. My city was behind me. Punches thrown, a career high. I knew it wasn’t going to be easy.”

When asked about what’s next?

“160 (Middleweight) is my weight division. I want (Gennady) Golovkin….Golovkin’s about to unify. So, maybe we can go get those belts. I’m young. This was just my fourth defense. We’ll be ready.”