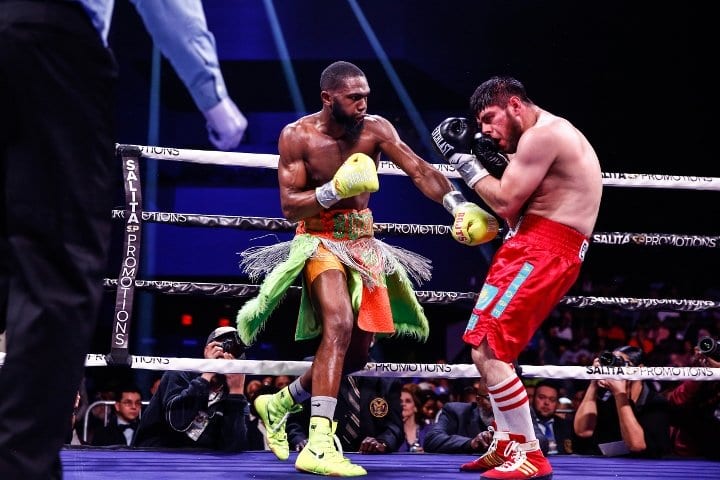 Jaron Ennis Looks To Make Most Of PBC Headline Opportunity

Another promising fighter out of Philadelphia looks to be the next one to take big strides in the Welterweight Division on Saturday night. And Jaron “Boots” Ennis knows he gets that chance, while headlining for Premier Boxing Champions on Showtime from the Mohegan Sun bubble in Connecticut.

Ennis and former world welterweight champ Sergey Lipinets met with the media Thursday for the final time prior to their Saturday night 12 round battle,

"Everyone knows my skill. I'm in and out like a robber. I plan to look good, put on a dominant performance, and end the night." @JaronEnnis
#EnnisLipinets pic.twitter.com/x5bBfBiOmN

“These are the types of fights I’ve been waiting for. This is the guy that’s going to take me to the next level because he has a good name and he was a former world champion at 140 pounds. After this, without looking past Sergey Lipinets, I feel like I’m ready for a top five or top three guy and then a world title at the end of the year. If any of the top guys need a dance partner, they can just call.

In putting his perfect record on the line in the Showtime main event, Ennis looks towards a late 2021 or early 2022 World title shot. He did had a hiccup in his last bout in December, which was ruled a no-decision when opponent Chris Van Heerden opened a nasty gash on his forehead by accidentally clashing heads. That caused the fight to be stopped prior to the 4th round and any official scorecard tabulations and called off.

That no decision stopped a streak of 16 consecutive wins by KO or stoppage for the 23 year old Philadelphian Ennis.

Standing in the way is Lipinets, a Russian at 16 – 1 -1,  who is previously held the IBF 140 lb belt until Mikey Garcia took that off of him in March of 2018 in a 12-round decision loss. Since then, Lipinets is probably best known for his wild TKO win over Lamont Peterson in March of 2019.

Ennis sounded one more bragging warning Thursday for the Russian,

“His style is tailor-made for me Him coming forward is picture-perfect for me. He’s going to be running into shots all night long. It’s going to be a long night for him.”

That we will see about for the brash 147 lb. star.

The Showtime co-feature will have Eimantas Stanionis and veteran Thomas Dulorme also in a 12-round WBA Welterweight Title Eliminator.