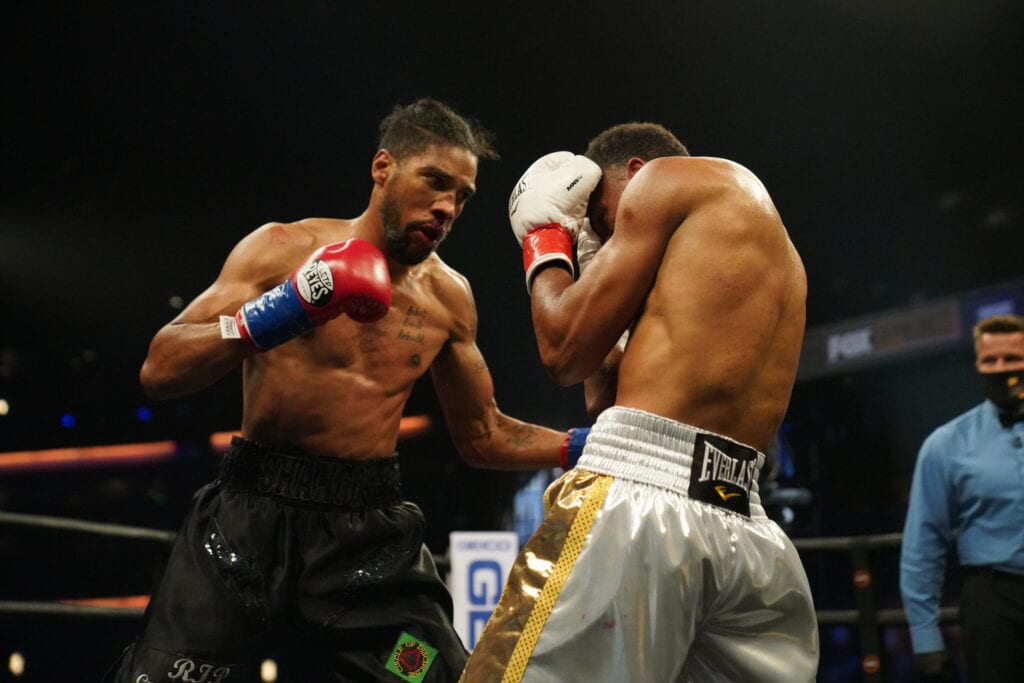 James defeats Dulorme by decision in a firefight

Fox Sports and PBC had its first live show back Saturday night from the Microsoft Theatre in Los Angeles, California, and to close out the broadcast, Jamal James defeated Thomas Dulorme by unanimous decision in a firefight.

This contest for some piece of the WBA Welterweight pie was a pick ’em fight going in and lived up to it. After a feeling out first round, the action picked up as Dulorme started throwing combinations while James started answering back, as well. James, in the contest had the reach advantage and was looking to use that to throw the jab from afar. As Dan Canobbio of Compubox pointed out, James’ output was not his usual.

James not letting his hands go as he usually does. Just 55 thrown per round through two. Came in throwing 72 a round. Dulorme’s counters are dangerous #JamesDulorme

James turned it up in the third round, with both having solid exchanges between the two as Dulorme was able to get inside to throw combinations. Dulorme was landing some wicked hooks in the sixth round as well, and by this point, this contest became a complete firefight.

James, in the middle of that round, however, landed at one point a twelve punch combination on Dulorme. This fight in the ring had the same feel of a James fight like the one he had against Antonio DeMarco last year. James was able to catch Dulorme throughout the seventh, which get a stern talk from his corner and trainer Joel Diaz in between that round, which the broadcast stayed with.

The ninth round was when James was starting to finally slow down Dulorme as he was able to land clean right-hand shots consistently and often. By the closing of this fight, it was still the same action. As game as Dulorme was, the right was landing more consistently and what got James the victory after twelve rounds.

With his right hand tied up in the clinch, Dulorme unleashes his left on James. #JamesDulorme #PBConFOX pic.twitter.com/YkQU9Xtzyj

This fight was a reschedule from their Covid 19 postponed April matchup.

And, we’ll see where James goes from here as with a piece of the WBA title at 147. But, with the win, this will vault at the forefront of the title picture soon.