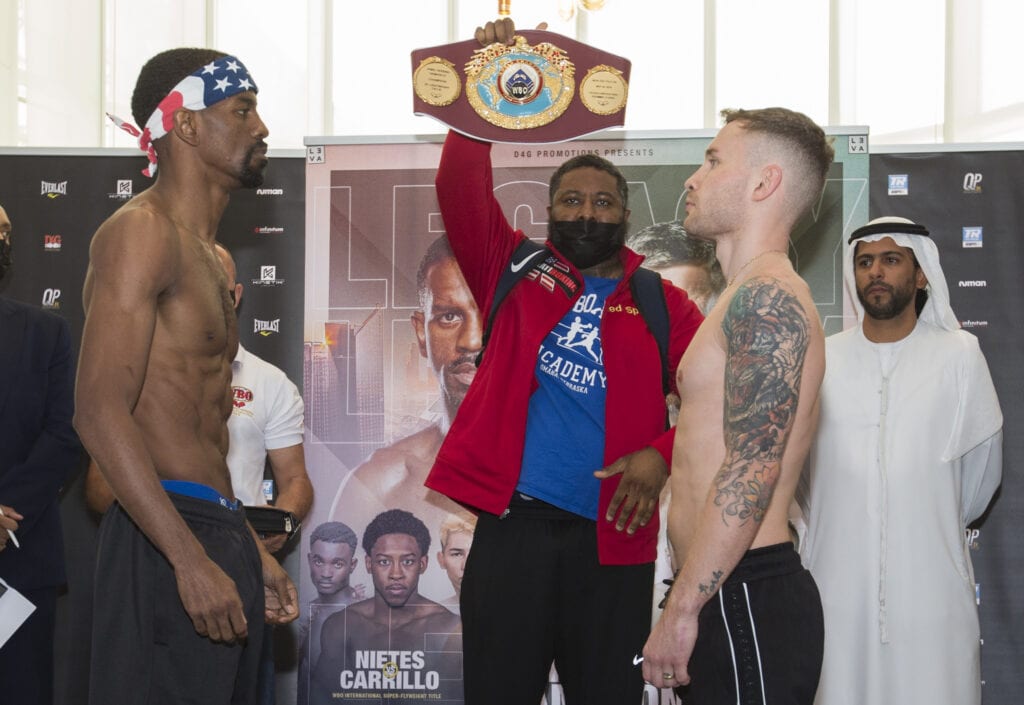 The wait was finally over and WBO Junior Lightweight Champ Jamel Herring made the most of it retaining by sixth-round stoppage of Carl Frampton.

The official time was 1:40 in the sixth round in what was an impressive performance for the 35 year old  Herring.

The contest that took place at the Caesars Palace Bluewaters in Dubai, United Arab Emirates was one that had several delays. But Saturday night, it finally went down and from the onset showed that Frampton early on trying to make it an ugly fight by getting inside. However, he was at a huge disadvantage from the reach of Herring. Herring in the first two rounds was able to keep his distance and was repeatedly out landing Frampton.

AND IT'S OVER!@JamelHerring puts Frampton down again early in Round 6 with a huge uppercut, steps on the gas and closes the show.#HerringFrampton | #AndStill pic.twitter.com/RQ83AhxoNT

In the fourth round Herring, now 23-2, has sustained a cut above the right eye, but was clearly ahead on the cards at the time. In the fifth round, Frampton with his face marked was sent to the canvas from a Herring straight left hand, but beat the count.

Then, in the sixth round Frampton was down again from a nasty uppercut. Frampton got up but Heering closed this show, as Frampton’s corner threw in the towel with him taking heavy punishment at this point.

This is getting intense ?

Right as Frampton was coming on following a cut to Herring’s right eye, @JamelHerring catches him perfectly early in Round 5. First knockdown of the fight …#HerringFrampton | LIVE NOW on ESPN+ pic.twitter.com/cehK6COg4e

The win for Herring is his third title defense will place him onto a possible unification bout with Oscar Valdez or the eventual mandatory bout against unbeaten former WBO Featherweight champ, Shakur Stevenson. Both fighters are promoted by Top Rank Boxing and could be headed for a multi-million dollar showdown in the U.S. this fall.

Frampton, 28-3 and the former Jr. Featherweight and Featherweight title holder, followed through and announced he was retiring after the fight and thanked his fans, wife, and kids for the support.

It was a fun fight while it lasted, but one with many expecting this outcome for the former two division world champ, Frampton. TJ Rives wrote for us that he would call it a day in the ring if he lost and did just that.

The bout had been delayed for over six months, as Top Rank and MTK Global tried to hold out for a location that could have fans. They eventually settled on Dubai  in the Middle East without fans present and Herring, who only arrived on Sunday showed no ill-effects of travel or jet lag.