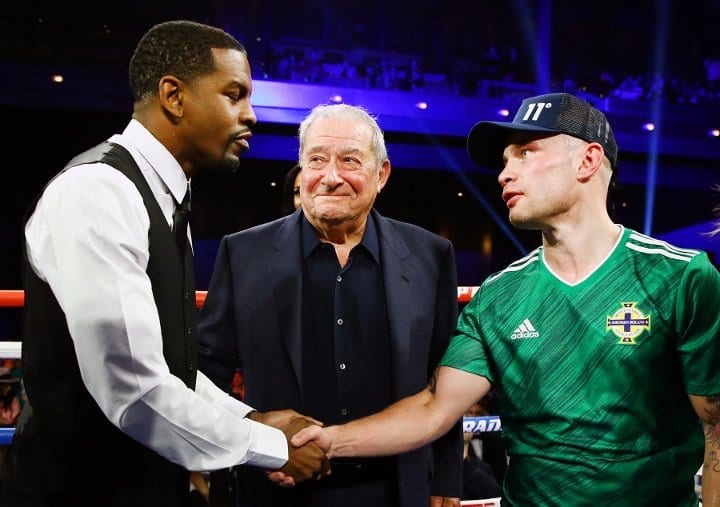 Saturday night at the Top Rank Las Vegas “bubble,” WBO Junior Lightweight champion Jamel Herring has plenty riding on his second title defense and that includes, whom awaits for his next fight.

First, Herring will step through the ropes after having battled Covid-19 back in July and having to reschedule this fight with lightly-regarded contender, Jonathan Oquendo, on two different occasions.

We previewed this battle on our Big Fight Weekend preview podcast, as senior writer Marquis Johns joined me:

Herring (21-2, 10 KOs) returns Saturday following the longest layoff of his career, nearly 10 months since he outpointed the previously unbeaten Lamont Roach Jr. at an outdoor ballpark in Fresno, Calif. Soon after his second positive COVID-19 test postponed the fight a second time in early August, he received a clean bill of health and resumed training camp in Omaha, Nebraska.

Oquendo (31-6, 19 KOs) rebounded from a March 2019 decision defeat to Roach to shut out Charles Huerta last September. He is 5-1 since a December 2015 defeat to Jesus Cuellar for the WBA Featherweight world title.

Still, by securing his likely win, the New York native and former US Marine Herring will now be in position to fight Ireland’s to division World Champ, Carl Frampton. They were scheduled to scrap in Ireland back in June before Coronavirus shut down the sport.

Frampton (28-2, 16 KOs) has held the Unified Junior Featherweight and Featherweight World Championships and has recently moved up to 130 lb. He most recently fought in the middle of last month in an easy win over late replacement Darren Traynor at the BT Sport Television Studios in London.

Frampton said to Boxingscene.com earlier this week about the potential matchup with Herring,

I feel like people see our stature and think that I’m just gonna have to bull into Jamel Herring and have a fight with him.

“I don’t see it like that. I feel like with my distance, control and my feet and my hand speed, I feel like I can out-box him.  It’s gonna be very difficult, but I’m confident I can beat him.”

For now it’s up to the fighter known as “Semper Fi” to set the possible Frampton match up into motion with what he does Saturday.