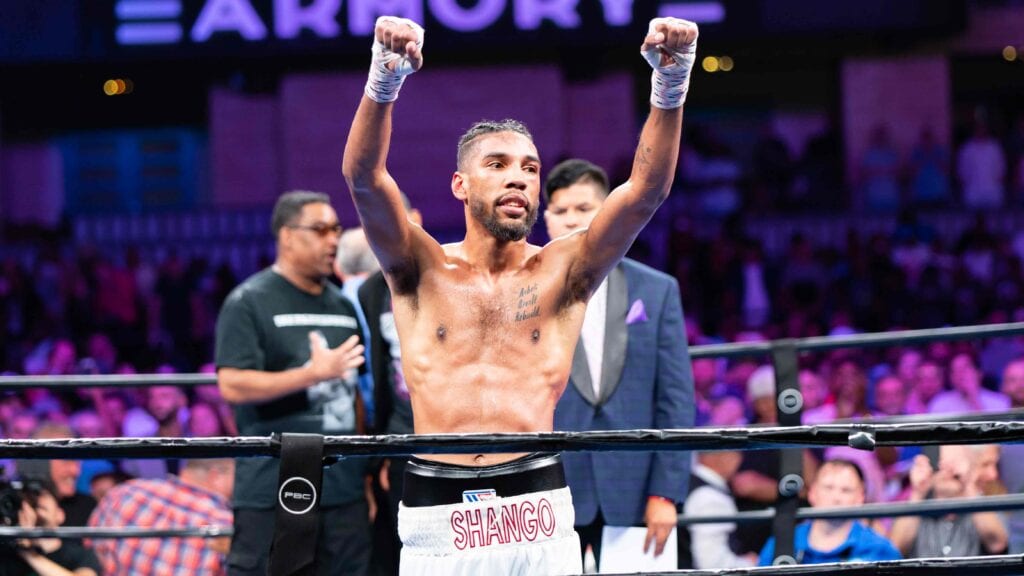 James, 26 – 1, 12 KOs, met with the media on Thursday in advance of his WBA “interim” 147 lb. title fight with Thomas Dulorme that was delayed from April due to Covid-19.

INTERIM TITLE ON THE LINE 👀🙌

This Saturday, @JamalShango and @ThomasDulorme battle for the Interim WBA Welterweight Title. The fight starts at 8 ET live on FOX #JamesDulorme pic.twitter.com/2VgT4XpcKj

And, it’s not lost on James the opportunity he is being given as the first feature fight on network TV,

“To be honest, I’m glad to have the opportunity. I’m glad to get back in the ring…A lot of people are out of work. I’m sorry for a lot of people out there. For me to be able to get this opportunity and provide for my family a little bit after this bout is truly a blessing.”

James has won his last six fights, including a 10 round main event decision in his hometown of Minneapolis over Anthony DeMarco, also last July. Dulorme is 25-3-1, with 16 KOs and will be formidable competition for James. Manny Pacquiao has the WBA “Super” version of the Welterweight championship after his decision win over Keith Thurman a year ago July.

Meanwhile, James also described what it has been like to be part of the modified bubble that PBC has in downtown Los Angeles in advance of the fight being held with no fans at the Microsoft Theater Saturday:

“It ‘aint been too bad, man. We’re quarantined on certain floors. We’re urged to stay in the rooms and stuff, except for our designated times to train and eat and stuff like that.”

Finally, I had a chance to ask James about what he can compare Saturday night without fans present to in his previous professional experience?

“All the time in the gym! You don’t have any fans, when you’re sparring….Earlier on, when I first started my pro career,… you would fight after main events, if you’re like a ‘swing’ bout.

There wouldn’t be people in the crowd- a lot of people leaving out like that. Again, as long as the ring has four corners and posts, the opponent has two arms two legs and a head, then we’re gonna get it on!”

An impressive win Saturday would certainly keep James’ name at the forefront for a possible title shot later in 2021.