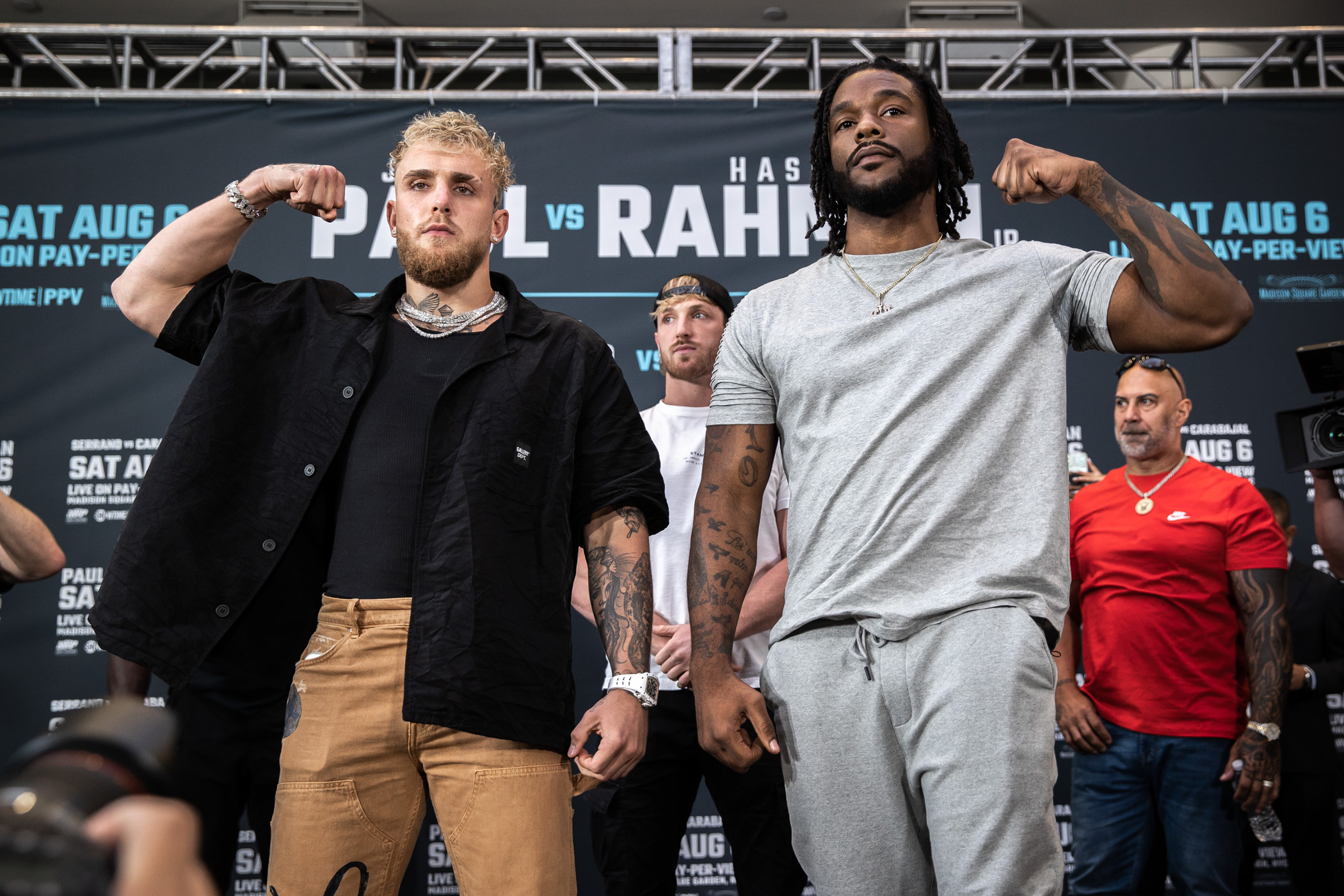 The Jake Paul-Hasim Rahman Jr. event scheduled for Showtime PPV on Aug. 6 at Madison Square Garden in New York was canceled on Saturday night because of Rahman’s severe issues making weight. Showtime announced the cancelation during its preliminary coverage of the Danny Garcia-Jose Benavidez Jr. card.

Paul and Rahman, the son of former heavyweight champion Hasim Rahman Sr., were contracted to meet in the eight-round main event at the cruiserweight limit of 200 pounds, nearly 10 more than Paul had boxed at, as an accommodation to career-long heavyweight Rahman. However, with Rahman struggling to get down in weight and the fight only a week away, it was canceled.

Shortly after Showtime made the announcement, MVP Promotions, Paul’s company, issued a statement on the situation.

“On July 5, Hasim Rahman Jr. signed a bout agreement to fight Jake Paul on August 6th at Madison Square Garden at a maximum weight of 200 lbs. At the time of signing Rahman provided evidence of his weight to give comfort to Most Valuable Promotions and the New York State Athletic Commission that he would not be losing more than 10% of his weight over the 4 weeks leading up to the fight,” the MVP Promotions statement said.

“Since weighing in at 216 lbs on July 7, Rahman and his camp have offered assurance after assurance publicly and privately that he was on track to make weight at the weigh-in on August 5th, going as far as to provide a letter signed by a recognized nutritionist that his weight cut was progressing without issue per New York State Athletic Commission’s required weekly weight checks. In the last 48 hours, it has become clear that these assurances were not made in good faith.

“On Friday, Rahman submitted a weight check to the New York State Athletic Commission that demonstrated he had lost less than 1 pound since originally signing to take the fight 24 days prior. This prompted the Commission to declare that it would not sanction the fight at less than 205 lbs. Still, Jake Paul was prepared to move forward with the fight at this new weight and a new contract was sent to Rahman’s promoter (Greg Cohen) reflecting a 205 lbs. limit, imposing strict penalties should he fail to make weight.

Upon receiving this new contract Saturday morning, Rahman’s camp indicated for the very first time that he planned to weigh 215 lbs. at the official weigh-in and would not agree to weigh-in at 205 pounds and informing Most Valuable Promotions that they are pulling out of the fight unless the fight was agreed to at 215 pounds.”

MVP went on to say in its statement that “MVP and Jake Paul will not reward someone that has conducted themselves in such a deceiving and calculated manner. Therefore, MVP is left with no choice but to cancel the August 6th event. This forced outcome impacts Jake Paul, Amanda Serrano and every other fighter on this card who have trained tirelessly over the past few months for this event. The boxing community must hold Hasim Rahman Jr. liable for his lack of professionalism.

The Rahman side had a different view of how things went down.

“The kid was 232 pounds when he accepted the fight,” Cohen told Big Fight Weekend on Saturday night. “He had an incredible team of nutritionists, physicians and weight loss specialists who devised a plan that he was following to a T. The last few days he was bouncing between 212-215 pounds. He let me know that he was feeling extremely weak and dizzy and did not believe he was going to be able to make 205 pounds without putting himself in harm’s way.

“Rather than BS anybody I contacted MVP and was transparent. Junior was willing to fight Jake for zero purse (but still with money coming from his sponsors) and stick to the second-day weigh-in agreed upon weight, but knew he would not be able to make 205 pounds. Obviously, it’s extremely disappointing. Junior worked very hard and was having an incredible camp. Team Paul dodged a bullet with this one.”

Rahman (12-1, 6 KOs), 31, a Baltimore native, accepted the fight after Paul terminated the contract of Tommy Fury, the half-brother of reigning heavyweight champion Tyson Fury. Tommy Fury (8-0, 4 KOs), 23, claimed he was unable to get his paperwork in order to travel from his home country of England to the United States, causing their kickoff news conference in New York was canceled.

Rahman weighed 224 pounds when he suffered his first defeat by fifth-round knockout to James McKenzie Morrison, the son of the late former heavyweight star Tommy Morrison, on April 29 in
Las Vegas.

Because of the size difference, the Paul-Rahman deal called for a private weight check at 12 p.m. on the day of the fight at which they could not weight more than 214 pounds. Cohen told Big Fight Weekend that Rahman weighed 214 pounds on Saturday.

Not only is Paul-Rahman off but the event cancelation also means that unified women’s featherweight titlist Serrano (42-2-1, 30 KOs), 33, of Brooklyn, New York, had her defense against Argentina’s Brenda Carabajal (18-5-1, 9 KOs), 31, in co-feature called off.