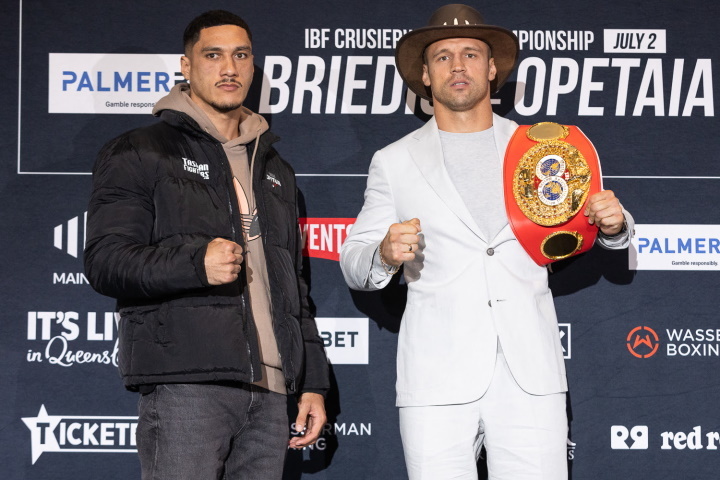 It was a classic battle of young unproven contender against veteran world champion, and Saturday night in Australia Jai Opetaia fulfilled a dream of becoming a world champion with a unanimous decision win over IBF cruiserweight champ Mairis Briedis.

The unbeaten Opetaia dominated the fight from the beginning controlling things with his southpaw, right jab and straight left hands behind them on his way to a clear unanimous decision verdict 116 – 112 x 2 and 115- 113 on the third card. That sent the crowd in the Gold Coast Convention Center in Broadbeach, Australia into a frenzy.

The 27-year-old Opetaia was a virtual unknown outside of the Australian continent until Saturday night. Although he had amassed 21 wins with 17 KOs going into his title shot, he clearly was stepping up at least two levels to fight Briedis who was making the second defense of his IBF championship.

But, the 37-year-old was outclassed and outgunned early by the faster Opetaia, who repeatedly scored the straight left hand and eventually bloodied Briedis’ nose in the third round. Opetaia also staggered Briedis with a good right upper cut at the end of round four that had him in some brief trouble before the bell. And, at that point it appeared that an upset was truly brewing for Opetaia.

Opetaia was clearly in command through six rounds, but Briedis, while bleeding badly from the nose round after round, finally summoned his best round of the fight to that point in the 7th. That’s when he scored two hard overhand rights that rocked the challenger in the final 30 seconds.

But, to his credit Opetaia survived, got back on his game-plan and was still in good shape by landing straight right hands to the body and with the jab to the injured nose. As the fight entered the championship rounds, where Opetaia had never been before, Briedis finally had his best round of the entire fight in the 10th.

That’s when he wobbled Opetaia twice with hard right hands. The challenger smartly grappled him and was able to survive but clearly was tired and perhaps on the verge of being stopped despite appearing to be ahead in the scoring. Still the native of Sydney, who is of Samoan descent, continued to battle in the 11th and actually, out-slugged Briedis with repeated straight lefts to win that round and basically, secure the decision.

However, there was more drama in the corner before the 12th, as it was clear that Opetaia was suffering from what appeared to be a fractured jaw. Still, he came out for the final frame and held up against Briedis’ weary onslaught to try to score a desperation knockout.

In the end Opetaia won convincingly to capture the IBF world championship with the fight coming on the fifth anniversary of fellow countryman Jeff Horn’s stunning upset of Manny Pacquiao for the WBO world welterweight title. Horn was in attendance and on the PPV commentary Saturday night in Broadbeach.

When the fight was over Opetaia could not give a post-fight interview in the ring, but his corner did confirm that they believed Opetaia may have broken the jaw as early as the second round of the fight. And, they credited him for continuing late, when it was clearly affecting him in the 11th and the 12th.

The loss is only the second for Briedis (now 28-2) who previously dropped a unified cruiserweight world title bout to eventual undisputed champion Oleksandr Usyk in January 2018 he had won five fights in a row over the last 3 1/2 years.

To his credit Briedis was willing to travel on a larger payday to Australia to fight Opetaia in the Gold Coast Beach town of Broadbeach. But, on this night it belonged to the Aussie who simply was fresher and better over the 12 rounds to capture the victory.

Will Joe Joyce Return To Form Off Injury?
Joe Joyce Starts Slowly But KOs Hammer In 4th
Advertisement
To Top