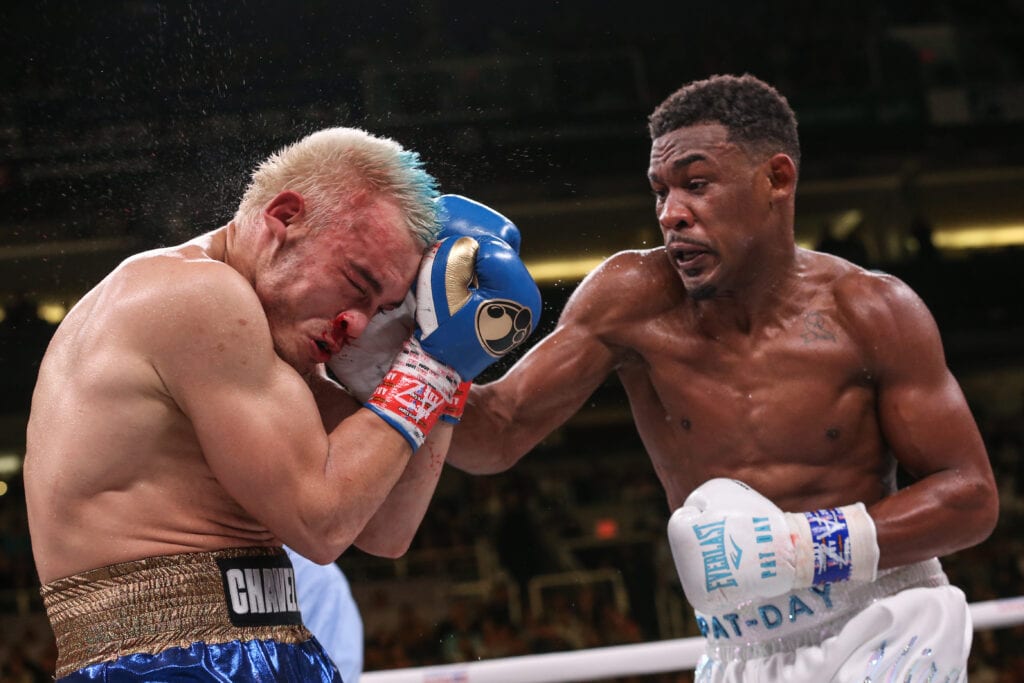 Buying public got what it deserved with Chavez Jr

No one should be surprised by any part of the outcome of Daniel Jacobs-Julio Cesar Chavez, Jr. fight Friday night in Phoenix Arizona.

After all, Friday was the likely final chapter of what Chavez, Jr. has been his entire career- a continual letdown.

And, after the “soap opera-like” events of the week leading up to the fight, it was only fitting that the fighters and everyone involved had to leave the Phoenix ring area with debris being showered on them by the angry public.

The end came after the 5th round, when Chavez complained to his corner that he could not breathe, had been butted and likely had a broken nose. So, Jacobs was declared the winner of an important fight for him by 5th round TKO. Jacobs is now back in position to potentially get another world title fight either at Middleweight or Super-middleweight (perhaps a rematch with Gennady Golovkin) because of his victory.

But, that’s not the real story.

The real story is the circus like situation that Chavez Jr. created weeks ago and that continued all the way through the post-fight ugliness in front of over 10,000 angry fans at the Talking Stick Resort Arena downtown.

As we wrote extensively, Chavez initially refused to take a drug test when a representative from the Voluntary Anti-Doping Association (VADA) showed up at his California gym in October. That led him to get suspended by the Nevada Athletic Commission and put the fight with Jacobs in jeopardy in the first place.

Chavez, however, successfully got a Temporary Restraining Order on Tuesday to stop Nevada from suspending him.

However, Matchroom Boxing promoter Eddie Hearn, who made the decision to move the flight to Phoenix to avoid the Nevada controversy, while selling tickets and trying to capitalize on all of the negative publicity, is not blameless in this situation.

No, Hearn decided to condone Chavez’s antics and that also contributed to what happened Thursday. That’s when a former middleweight champion from years ago missed the 168 lb. weight limit by an embarrassing 5 lb. and the fight was once again potentially going to be called off.

Chavez was then docked $1 million of his reported $3 million guarantee and had to give that purse money to Jacobs to allow the fight to still happen.

This, while contender Gabriel Rosado was waiting in the wings to be a replacement for Chavez for Friday night. Hearn, also knew that taking Chavez out of the main event would potentially cause a massive outcry and tickets to have to be refunded etc.

Then, came fight night and  as one final part of the bizarre episode, Chavez came to the ring Friday night with his hair dyed blonde with a blue dye patch in the front. No one quite understood what the significance of that was. And, certainly with his iconic Hall of Fame fighting father sitting ringside, even he had to be both puzzled and embarrassed by his son’s new “look’ and all of the events above.

No more so, than when Chavez gave up after five rounds of a fight that he was at least battling in and the elder Chavez’s reaction said it all:

Julio Cesar Chavez looking disappointed as his son, Chavez Jr, quits. Must be hard for a warrior like him to take that in! ? #JacobsChavezJr pic.twitter.com/Xd8yjPhHZG

Here’s the bottom line, Chavez has been a misfit for the better part of career and certainly, the last five years in the sport.

He’s failed post-fight drug tests and has only fought one time in the last two-and-a-half years. This after he was given “the gift,” because of his father’s name, of being able to fight Canelo Alvarez. Alvarez beat him easily in May of 2017.

And all of the crazy circumstances in and around the fight Friday night, led the public to react negatively and inappropriately by throwing debris and objects at Jacobs, while he was trying to do his victory interview in the ring. And, it showered down on Chavez and his team as they tried to get back to the dressing room.

The Latin phrase is: “Caveat Emptor” or “let the buyer beware.”

And, as this demonstrated yet again, you must pay attention to all the warning signs that: instead of getting a legitimate, exciting fight that means something for the future, you’re instead being delivered a joke impersonating a big-time fight to take your time and money.

And, the punchline to that joke was/is Julio Cesar Chavez Jr., and Matchroom Boxing not doing anything about him for all the time they had to do so.