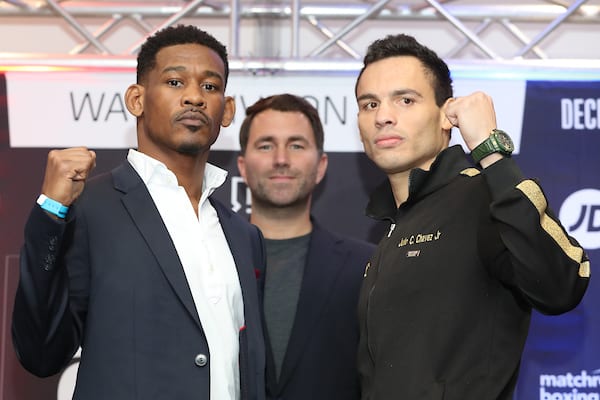 After much controversy, Daniel “Miracle Man” Jacobs will finally get a shot and Julio Cesar Chavez, Jr. in the main event of the Matchroom Boxing Dazn streaming show tonight in Phoenix.

And for the former IBF middleweight champion he knows that despite all of the shenanigans that have gone on leading up to the fight involving his opponent, an impressive win puts him right back in the World Title picture at either Middle or Super middleweight.

We discussed at length on the latest Big Fight Weekend podcast the controversy and the matchup, as Jacobs tries to bounce back from his May loss to Canelo Alvarez by fighting the son of the Mexican boxing Legend.

Hear from Marquis Johns, Sr. writer a bigfightweekend.com, Ryan O’Hara of fightnights.com and Antione Williams of “The Geatest of All Time Boxing Promotions” in Houston by clicking below

Jacobs, who got the moniker “Miracle Man” after he beat a rare form of cancer earlier in his career, comes in with a 35 – 3 record and 29 KOs.  Although, it should be pointed out that Jacobs does not have a knockout on his resume in the last three calendar years. In fact, you have to go back to his WBA “Regular” middleweight title defense in September of 2016, when he stopped Sergio “the Latin Snake” Mora in 7 rounds.

Coincidentally, Mora will be on the call Friday night for the DAZN streaming service coverage of the bout where Jacobs wants back on the big stage.

Jacobs also fought a hotly-contested battle with Gennady Golovkin in March of 2017 at Madison Square Garden losing an arrow 12-round decision. His biggest win recently was a 12 round Split Decision over Lithuanian Sergei Derevyanchenko to captured the vacant IBF Middleweight Title in October of last year.

As for Chavez, it has been a highly controversial road to the Talking Stick Arena, the home of the Phoenix Suns. First, he evaded a Voluntary Anti-Doping Association (VADA) drug tester in October at his gym in California.

That led the Nevada State Athletic Commission to suspend Chavez (51-3-1, 33 KOs) because they consider a skipped or missed test, the same as a failed test.

Matchroom Boxing promoter, Eddie Hearn, went ahead and moved the fight in nearby Arizona. And, despite threats from Nevada that he might lose his license to promote in their state, the non-title fight is still proceeding.

Chavez, who’s fought once in two and a half years since Canelo beat him, eventually won a temporary restraining order on Tuesday in a Las Vegas courtroom to make sure that he could get licensed in Arizona to fight Friday night.

Then came Thursday’s weigh-in, where the former WBC middleweight champion Chavez blew past the 168 lb. limit, weighing in at nearly 173 lb.

It has been widely reported that Chavez is being fined $1 million of his purse and that money will be given to Jacobs for tonight’s bout.

This is basically being viewed that’s a sign that Chavez hasn’t taken his training seriously, despite working with one of the top trainers in the sport, Freddie Roach.

We will find out if Chavez has much to offer, or if Jacobs will score the big victory that he’s looking for coming up.