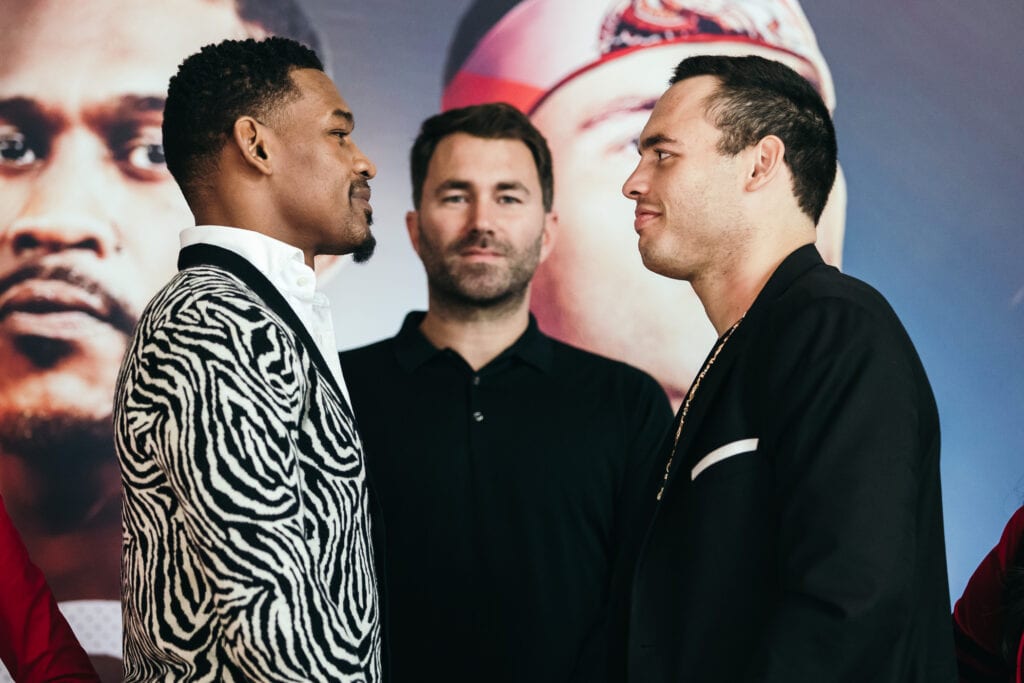 Jacobs-Chavez Jr made official for December

On Friday in Los Angeles, Matchroom boxing held the press conference for Daniel Jacobs and Julio Cesar Chavez Jr. held the official press conference to announce their showdown on Friday, Dec. 20 in Phoenix, Ariz. The event will be streamed live exclusively on the platform DAZN. Here is what the they had to say at the conference ahead of their clash at 168 pounds.

“Excited to back in the ring with a great opportunity against Julio Cesar Chavez to show my skills in the super middleweight division. It’s an opportunity to be strong, and go inside the ring fully healthy, no excuses outside. I think this will be my show. This is a perfect caliber opponent, and complements my style very well. This sport can be very unforgiving, and the thrill can be gone. My dear friend Patrick Day, I lost a great friend of mine. It’s really hard to move forward, but I will always have him in the back of my mind. Boxing is not the same, but I want to maximize my full potential. I look forward to continuing in the super middleweight division, and I’ll see you all Dec. 20.”

“I’m so happy to be here and this opportunity given to me. I’m going to be ready, and I’m going train hard for this fight. I’m very happy about this fight.”

“This is a huge fight to end the year. The last few weeks we have seen fight of the year candidates continuously. On Dec. 20, we cap off with a fantastic fight. Danny Jacobs coming off a great fight against Canelo Alvarez, losing his IBF Middleweight belt, now moving up to 168, which I think will be a brilliant division for him. And Julio Cesar Chavez who has had his ups and down, now gets a great opportunity to fight where his father last fought.”

“Fight season continues. And Jacobs vs. Chavez Jr. will be a spectacular way to close out 2019. In the final four months of the year, our subscribers were treated to who’s who of boxing’s best:

It’s a fascinating fight between high-profile former champions and we think it will create a lot of buzz within the boxing community.”