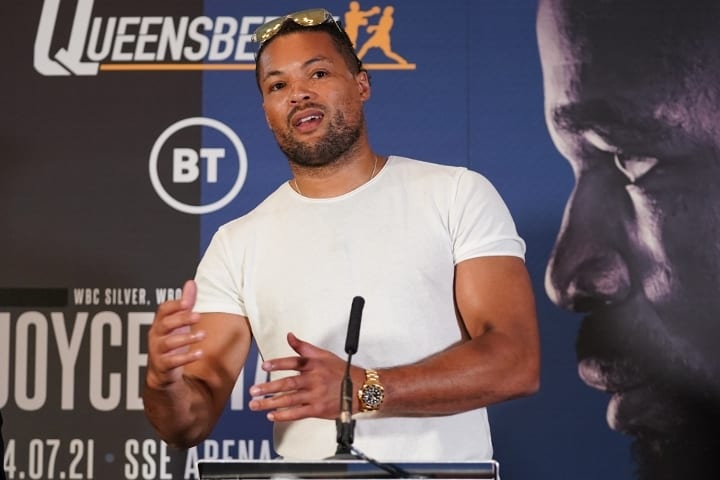 Unbeaten heavyweight Joe Joyce is in action this weekend as he is in action at Wembley Arena, taking on Carlos Takam in what should be a fun contest for the British Olympian.

That isn’t to say that Takam is taking this lightly and isn’t just coming into the matchup as just another sta-busy opponent.

“Hey boy! What’s up to Joyce?” said Takam to Joyce in a conversation before their fight Saturday. “I hope you are ready for this fight because I’ve come here to win. On Saturday you won’t beat me, I’m sorry. This is my time. This is Carlos Takam time, and I’m going to beat your guy!

Joe Joyce comes into the fight the favorite as well as confident he’ll make a statement Saturday night stopping the former two-time world title French-Cameroonian challenger. For Joyce, this would be his first action in the ring since stopping Daniel Dubois last November.

“it’ll be good if I put a statement out there and do something that they (Anthony Joshua or Dereck Chisora) couldn’t do or like a lot better or a lot sooner,” Joyce said in response to knocking out Takam. Both Joshua and Chisora have challenged Takam by stopping him in the tenth round and round, respectively.

A good measuring stick for Joe Joyce this weekend. The question in the United States is, where can you watch it?

The answer will be by alternative means and what I like to call “modern technology,”  as I was advised Monday and confirmed by the schedule on ESPN+ that this fight card was left off it. Nothing new as this has been the way it has been for most Frank Warren Queensbury cards since the pandemic. They usually only fall on the ESPN+ schedule on a fight card by card basis and generally if there is someone affiliated with MTK Global on the card. I’ll save you a click over to Boxrec; there isn’t any, which means you’ll have to catch it either VPN or, as 99.9% of the boxing world knows it, “Team Stream.”

(Big Fight Weekend here does not endorse the bootlegging or illegal streaming of any fight broadcast, but there isn’t a rock big enough on this planet to act like this doesn’t exist with one click on the internet. )

UPDATE: On Tuesday morning, Fite Tv, announced they would be carrying the card in the United States.

🥊It's a summer sizzler as @JoeJoyceBoxing faces the biggest challenge on his path to world title aspirations.

Available in the 🇺🇸 only

The end goal for all of this is more than likely the winner of this bout is still in line to face Anthony Joshua as the WBO mandatory challenger at heavyweight. That is still being ironed out as we have been waiting for the “big fight announcement” of Joshua and Oleksandr Usyk for a solid two months now. That was slated for September, but I’ll wait for something official on that fight happening. While that is getting sorted out, Joyce is looking forward to readjusting back to fighting with fans once again for the first time in two years.

“It’ll be a bit weird since it’s been such a long time since I’ve been out there with a crowd and stuff, but I won’t let that distract me,” Joyce said.