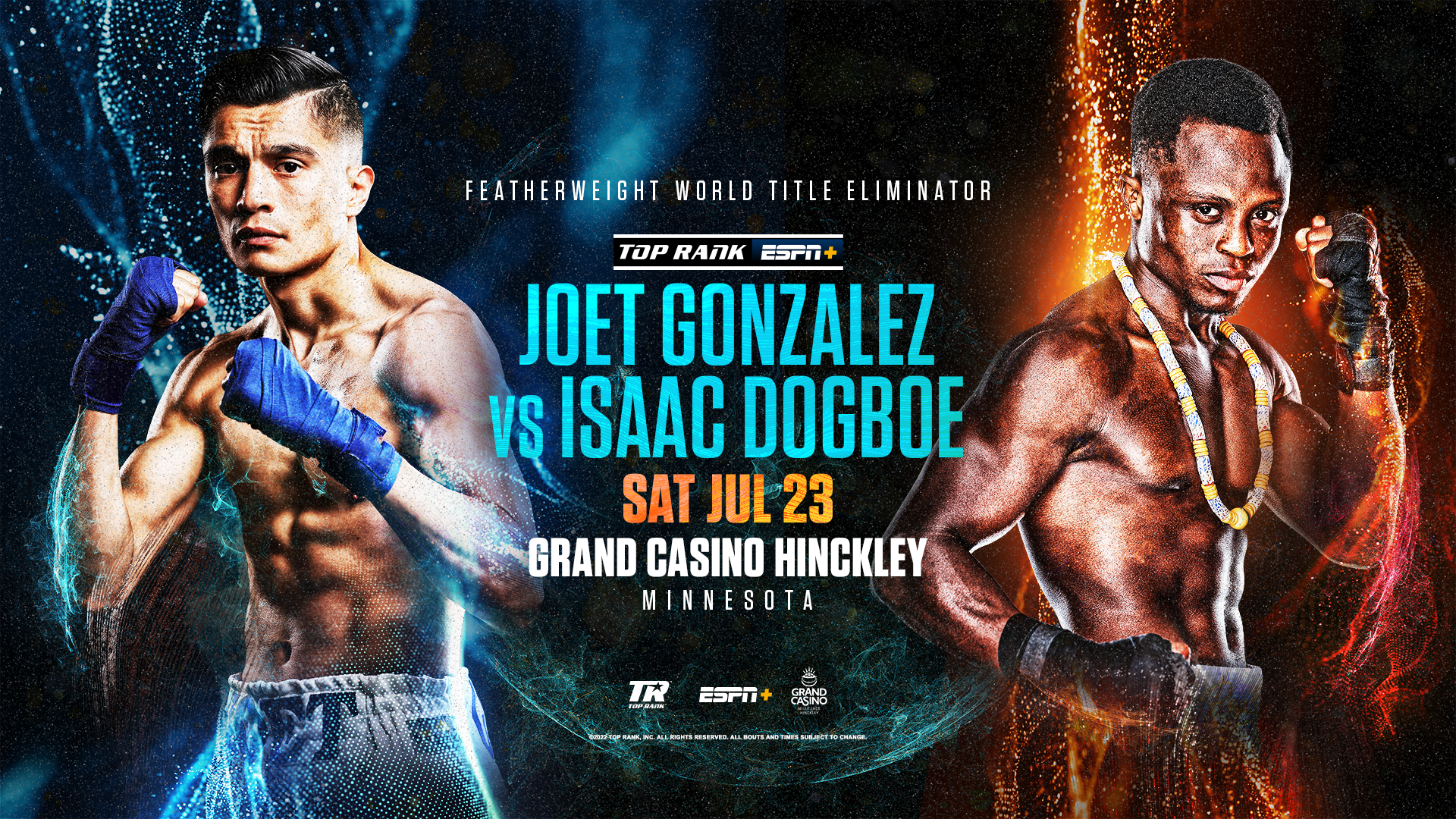 Former WBO world junior featherweight champ Issac Dogboe is back for later this Summer and headlining for Top Rank Boxing.

From their Tuesday afternoon release,

It’s the “Quiet Storm” versus a “Royal Storm,” a can’t-miss featherweight matchup with a title shot on the line. Two-time world title challenger Joet Gonzalez will take on former junior featherweight world champion  Isaac “Royal Storm” Dogboe in a 10-round main event Saturday, July 23, at Grand Casino Hinckley in Hinckley, Minnesota. Gonzalez will put his WBO International belt on the line, with the fight also serving as a WBC world title eliminator.

In the 10-round lightweight co-feature, undefeated contender Giovanni “El Cabron” Cabrera hopes for a signature win against the flashy Gabriel Flores Jr.

Gonzalez-Dogboe, Cabrera-Flores and undercard bouts will stream live and exclusively in the U.S. on ESPN+.

“Joet and Isaac are guaranteed entertainment each time they step through the ropes, and I have no doubt they will combine for an action-packed main event,” said Top Rank chairman Bob Arum. “With Cabrera and Flores in the co-feature, this is a truly sensational summertime card at the Grand Casino in Hinckley.”

Gonzalez (25-2, 15 KOs), from Glendora, California, is considered one of boxing’s best uncrowned champions, a 10-year pro whose only defeats have come to Shakur Stevenson and Emanuel Navarrete in separate bids for the WBO featherweight world title. Gonzalez’s October 2021 decision loss to Navarrete was considered one of the best action fights of the year and did little to diminish his standing.

He is currently rated No. 1 by the WBO and No. 3 by the WBC, which comes off the heels of his ninth-round knockout over Jeo Santisima in March.

Gonzalez said, “The third time’s a charm, and I’m more motivated than ever to have a world title around my waist. Isaac Dogboe always comes to fight. The respect is there, but on July 23, I am preparing to go to battle. I expect the best version of Dogboe, and I will be at the top of my game.”

Dogboe (23-2, 15 KOs), from Anyako, Ghana, burst onto the world scene in April 2018 with his title-winning knockout over Jessie Magdaleno. In his first title defense, he blitzed Hidenori Otake in the opening round. Dogboe’s rapid rise came to a halt with consecutive defeats to Navarrete, but he reignited his career with victories over Chris Avalos, Adam Lopez, and Christopher Diaz.

The Diaz and Lopez bouts — 10-round majority decisions — were toe-to-toe barnburners that may serve as an indication what he’ll bring against Gonzalez. A 2012 Olympian, Dogboe has royal lineage, as his late grandfather, Torgbui Sri III, was the ruler of the Anlo state in Ghana’s Volta Region. His return to boxing royalty hinges on a victory over Gonzalez.

Dogboe said, “I have been tested against the very best, and on July 23, we go to war against another top contender in Joet Gonzalez. I am excited to be back in a main event as I continue my quest to become a two-weight world champion.”

Cabrera (20-0, 7 KOs) inked a promotional contract with Top Rank earlier this year and has notched decision victories over Rene Tellez Giron and Elias Araujo to make it 20 for 20. Trained by Freddie Roach at Wild Card Boxing Club in Los Angeles, Cabrera started boxing at 16 when he was inspired by Roach’s most famous pupil, Manny Pacquiao.

He was raised mostly in Chicago and developed as a pro at the Emerald Queen Casino in Tacoma, Washington, where he headlined six events. Following an October 2019 win in Chicago, he was sidelined for more than two years due to promotional and managerial issues. Since signing with Top Rank, Cabrera has re-established his standing as a contender to watch.

Flores (21-1, 7 KOs), a 22-year-old from Stockton, California, saw his momentum come to a temporary halt with a one-sided loss last September to Luis Alberto Lopez. Less than six months later, Flores survived a gut check to edge a majority decision over Abraham Montoya. Prior to the Lopez loss, Flores became only the second man to knock out former world title challenger Jayson Velez.

Tyson Fury Says Nothing Imminent On Next Fight
ESPN Will Honor Vitali Klitschko With Courage Award In July
Advertisement
To Top
We use cookies to ensure that we give you the best experience on our website. If you continue to use this site we will assume that you are happy with it.OkPrivacy policy