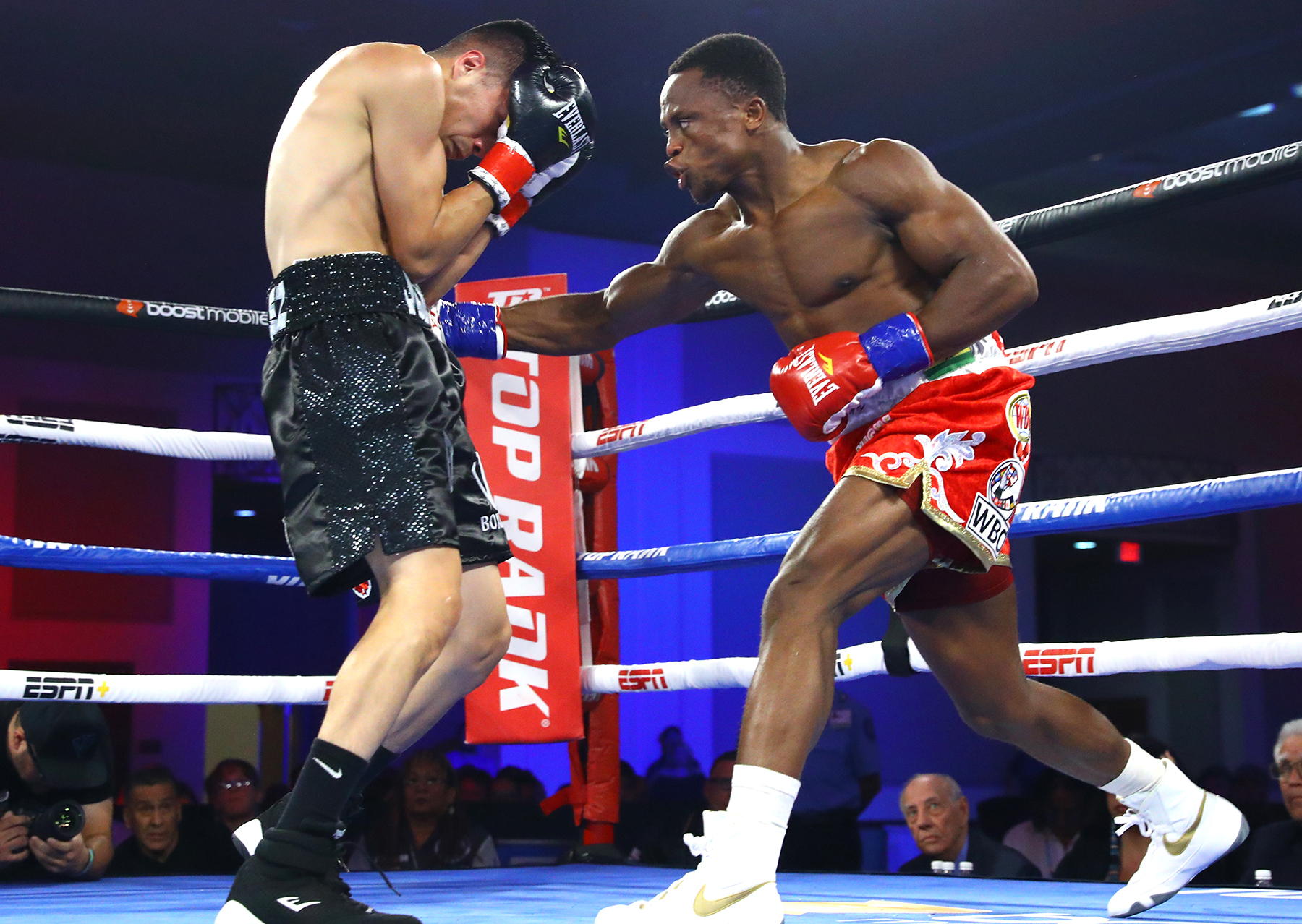 Trainer Barry Hunter, like everyone, knew it was a close fight. So, when his charge, featherweight contender Isaac Dogboe, returned to the corner following the ninth round on Saturday night he pleaded with his man to give him everything he had in the final round.

“Three hard minutes! You got to have it,” Hunter urged. “Hey, you got to have it, son! We’ve been here before. Let’s go! We need it! I never asked you for nothin’. Give me this last three minutes! Let’s go to work. Come on! Can you do it? Look at me! I believe in you, man. Let’s go.”

Dogboe, in his fourth fight with Hunter since making the hard decision to leave his father as his trainer, followed the orders. He went out and battled Joet Gonzalez toe to toe in the final round to punctuate an exciting fight by landing 29 of 109 punches to Gonzalez’s 24 of 65.

It was enough for Dogboe to win the 10th round on all three scorecards and enabled him to pull out a split decision victory in their WBC featherweight semifinal elimination bout in the main event of the Top Rank Boxing on ESPN+ card at Grand Casino in Hinckley, Minnesota.

Dogboe won 96-94 on two scorecards while Gonzalez won 96-94 on one card. If Gonzalez had won the 10th round the fight would have been a majority draw.

The victory was Dogboe’s fourth in a row since moving up to featherweight after losing the WBO junior featherweight title to Emanuel Navarrete by decision in December 2018 and then taking a beating from Navarrete in a 12th-round knockout loss in their immediate rematch in May 2019.

“I’ve always seen Barry as a very inspirational person, a father figure,” Dogboe said. “He’s a person that when it seems like it’s all gone, he always has something to say to you. I really needed him in my corner. He was able to pull that extra strength in me out. I want to say thanks to Joet Gonzalez. He’s a true warrior.”

Dogboe (24-2, 15 KOs), 27, of Ghana, utilized his superior boxing skills to handily win the first three rounds, but Gonzalez was not about to go down without a fight. He turned up the pressure in the fourth and landed the best punch of the fight, a big overhand right that rocked Dogboe early in the round.

He continued to attack Dogboe through the middle rounds. He forced him to the ropes several times, landed body shots and a powerful uppercut in the seventh round. By the end of the seventh round there was swelling around Dogboe’s right eye.

The final three rounds were extremely close with it being anyone’s guess who was ahead as they put on a thrilling show.

Gonzalez (25-3, 15 KOs), 28, of Los Angeles, whose two other losses came by decision in WBO featherweight world title fights to Shakur Stevenson in 2019 and last October to Navarrete (who had moved up and won the WBO belt after Stevenson vacated), said he felt he did enough to beat Dogboe.

“Maybe I should’ve stepped on the gas a little bit more,” Gonzalez said. “He was the shorter fighter. I (had) more height and reach, but he wasn’t coming in. As soon I was pressing, he was backing up. I was landing some shots, so I knew the right game plan was to go forward. He wasn’t going to come forward to me, but you know, I guess it was a close fight.”

For Dogboe, close was fine by him. All he knows is that he is a step closer to getting another opportunity to fight for a world title.

“Whoever the champions are, they should watch out,” Dogboe said. “The ‘Royal Storm,’ I am back, baby!”