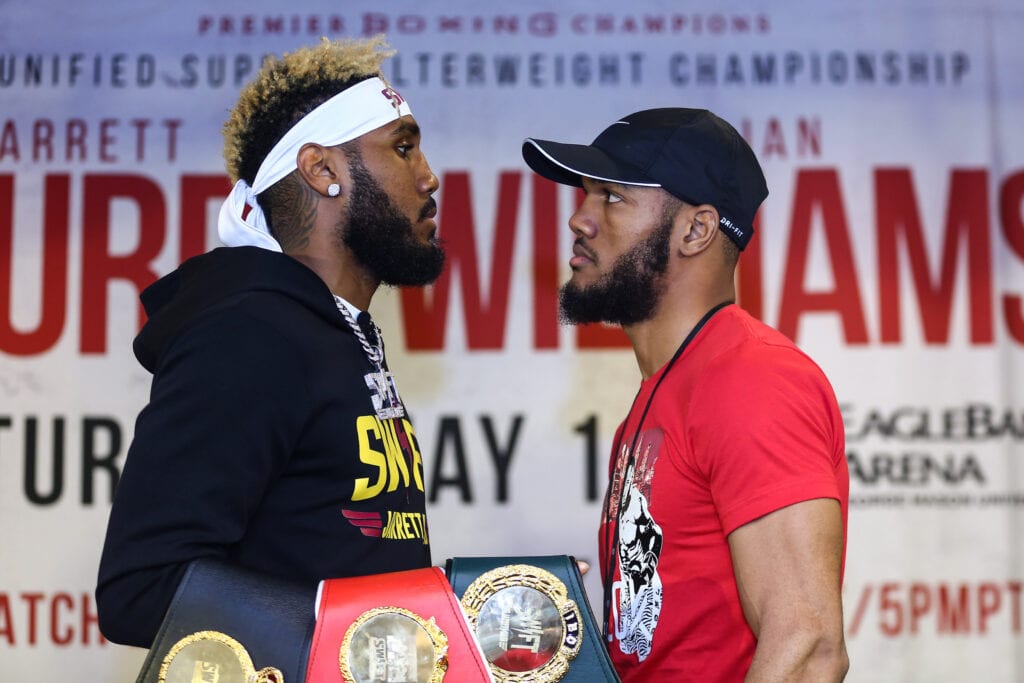 The boxing world as a whole was bummed to find out that Jarrett “Swift” Hurd announced yesterday that he was withdrawing from the anticipated rematch with Julian “J-Rock” Williams that was slated to take place on at the year.

Keith Idec of Boxingscene.com reported on the story that their immediate rematch, to which Williams is contractually obligated, had tentatively been programmed to headline a FOX broadcast December 14 from Barclays Center in Brooklyn, New York.

Their first fight which aired on Fox back on May 11th that took place in Hurd’s backyard in Maryland is without a doubt most boxing media and fans front runner for Fight of the Year. In that contest, Williams and Hurd exchanged shots in throwback fashion over twelve rounds in which Williams on by unanimous decision winning the WBA, IBO and IBF Junior 154 pound titles. Williams, in an interview with Boxingscne.com, was as disappointed as most of the fans were that the fight was scrapped.

“Our first fight was a really good, fan-friendly fight, but it appears he has other plans. I’m not going to bash him. I don’t know what happened. You have to ask him,” Williams said to Boxingscene in an interview. “Things change in boxing, man, what can I say. I don’t really know how to feel about it. If he doesn’t want to fight, that’s his prerogative. Smart move if you ask me. I wish him the best. I don’t have anything bad to say about him.”

In the interview, Williams hinted that Hurd at 6’1 might be too big to continue making weight at junior middleweight.

“I have no idea at this point if I ever fight him. I don’t know if he moves up, or not,” said Williams to Boxingscene. “I’m pretty sure my team will get together and get me a fight I deserve to stay busy. I’m always willing to fight the best available guy. I’m ready and prepared.”

Well wait to hear Team Hurd’s side of the story on why he pulled out, but if he is ng up in weight classes, it’s safe to say that part two from these fighters is not going to happen. Hurd since the defeat has gone separate ways with career-long trainer, Ernesto Rodriguez and we’ll see if the new direction is jumping up to 160 pounds.

Williams, in the interview not being able to go after Hurd, is willing to take on whoever wants a piece at the current champ.

“I have to put in extra work now that everyone wants my place. It’s a great position to be in, don’t get me wrong,” said Williams. “Now, it’s just about putting in more work to keep the titles here in Philadelphia.”

The winner of the Hurd-Williams rematch was in line to take on the winner of the Tony Harrison- Jermell Charlo rematch for the WBC portion of the belt at 154.  That match also hasn’t been rebooked since Harrison had to withdraw due to an injury in June. Still, a lot of fun fights to be made for J-Rock and the name that may creep in is Erislandy Lara, who just won the small portion of the same WBA belt after wiping out Ramon Alvarez this past Saturday in Minneapolis.