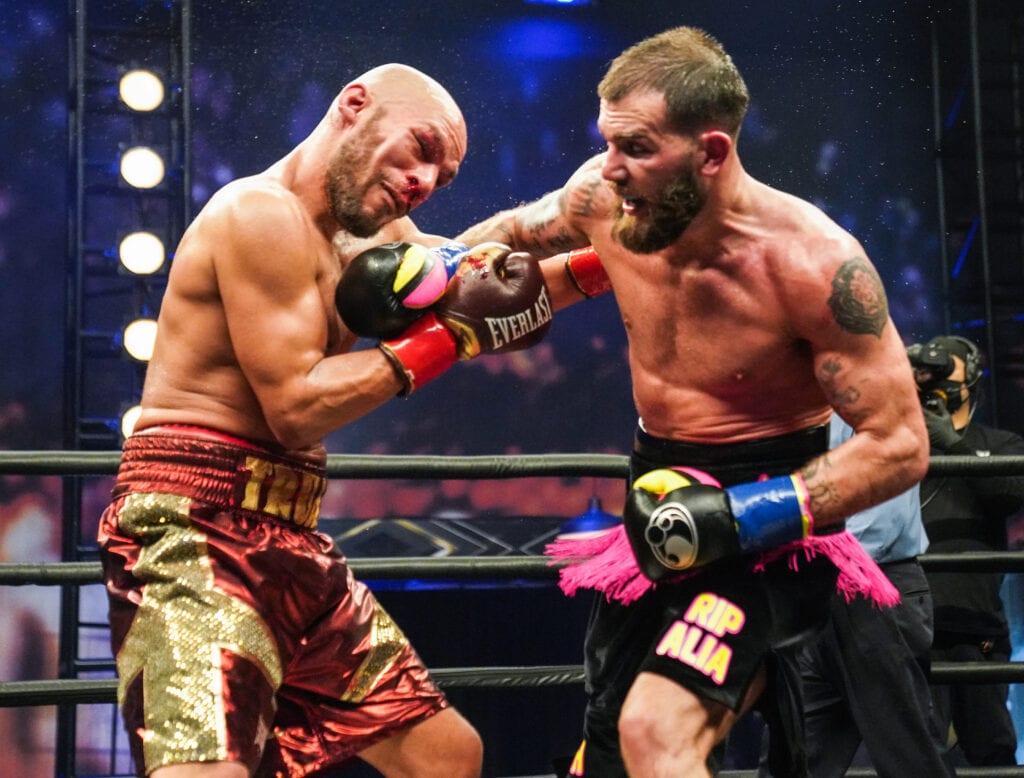 In the aftermath of his dominant Saturday night 12-round decision win to defend his IBF Super Middleweight Championship, Caleb Plant is now facing some adversity . And ironically, for the fighter who’s nicknamed “Sweet Hands,” it’s his left hand that’s the issue.

In the post-fight press conference after his easy win over veteran Caleb Truax, Plant revealed that early on in the fight he injured two of the knuckles on his left hand.

IBF 168-lb champ @SweetHandsPlant may have injured his hand early on, but that didn’t slow him down. #AndStill #PlantTruax pic.twitter.com/MmoBMaP9hH

Showing the swollen knuckles to the media on site and via Zoom, Plant relayed,

“I was looking to put combinations together. I did get a bit of a hand injury earlier on in the fight. And, I felt like it made me a little bit hesitant at times. There’s been a little layoff, but I put on a great performance.”

Plant threw a shutout by winning every round on all three judges scorecards to improve to 21 – 0, 12 KOs. As our Marquis John’s wrote Saturday night,

The approach from the opening bell by Plant was to attack the body of Truax early and often. This makes complete sense considering the 37-year-old Turaux was coming off a long period of inactivity and injuries over the past two years….

As the fight pressed on, Truax was bleeding from the nose as the fourth round closed out.  The jab of Plant to Truax not only was effective, but a weapon that Truax had no answer for. During the fight, Fox blow by blow man Brian Kenny called it a  “spirited effort,” which was about the only thing Truax could be labeled with. As the fight reached the halfway mark, Truax was bleeding from both his nose and eyes as he was slowly showing the effects of the punishment from Plant.

Plant was never threatened over the 12 rounds, but now we have a better understanding of why he didn’t finish off Truax in the later rounds.

Now, we wait for the official diagnosis on whether Plant hand is simply badly bruised or potentially, fractured? And, how that might affect his immediate future in 2021.

Plant was in the running to be Unified 168 lb. champ Canelo Alvarez’s return opponent last December after Canelo’s legal wranglings were finished with former promoter Oscar De La Hoya / Golden Boy Promotions. However, Premier Boxing Champions could not come to an agreement on the potential for an Alvarez – Plant fight.

So, Canelo chose instead to go with Matchroom boxing and a unification bout with WBA Super Middleweight World-champion, Callum Smith.

Alvarez dominated the Englishman Smith over a 12-round decision and now he’s on his own clear path try to be the Undisputed Champion at 168 lb. This includes Canelo having schedule to fight WBC Contender Avni Yildirim at the end of February and then try to win a third world championship at Super Middle, when he then takes on England’s Billy Joe Saunders, the WBO Champion, in a fight that has been long rumored and now coming in early May.

With Canelo likely to win both fights easily, will Plant be ready for a potential September or October fight with Alvarez? That is now a “wait and see.”