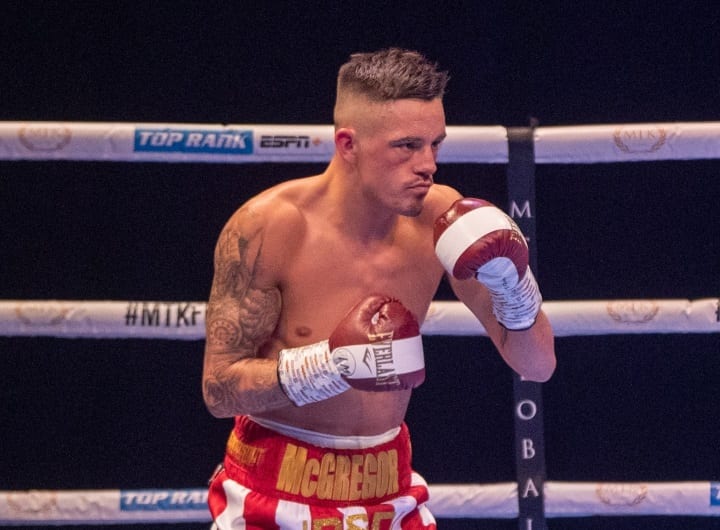 Guerfi-McGregor Moved To England on February 19

Due to the current travel restrictions from the United Kingdom to Dubai, next Saturday’s planned Rotunda Rumble is, unfortunately, unable to take place. Instead, a spectacular MTK Fight Night will be held in Bolton, England on February 19th, featuring three superb title fights.

The card will be broadcast live in the US on ESPN+ in association with Top Rank, and worldwide on IFL TV, and the new main event will see Sean McComb face Gavin Gwynne for the vacant Commonwealth lightweight title.

Undefeated Mohammed Sameer has been added to the card too, plus Elliott Whale takes on Jamie Stewart following his draw with Florian Marku, while Irish sensation Paddy Donovan returns as well. Paul Ryan will now make his professional debut at a later date.

? An update regarding next Saturday's planned event in Dubai, with several fights now moved to the #MTKFightNight on February 19th.

Liam Walsh’s planned vacant British lightweight title fight with Paul Hyland Jnr has unfortunately been postponed after Walsh tested positive for COVID-19. A new date for that fight, along with the European bantamweight title fight between Karim Guerfi and Lee McGregor, will be announced in due course.

The two Dubai events set to take place in March and April are currently scheduled to go ahead as planned.

MTK Global Promoter Lee Eaton said: “It’s a shame that next Saturday’s event in Dubai is unable to take place due to the current travel restrictions, but we have worked hard behind the scenes over the last few days to ensure the majority of the fighters on that card haven’t had to wait long for their fights to be rescheduled.

“It means that Sean McComb, Gavin Gwynne, Mark McKeown, Brad Daws, Pierce O’Leary and Irvin Magno have had to wait less than two weeks for their new date, so we’re delighted to be adding even more starpower to what was an already stacked MTK Fight Night on February 19.

“We’re hoping to get Karim Guerfi vs. Lee McGregor, and Liam Walsh vs. Paul Hyland Jnr rescheduled as soon as possible, so boxing fans won’t have to wait long to see those two fantastic fights.”