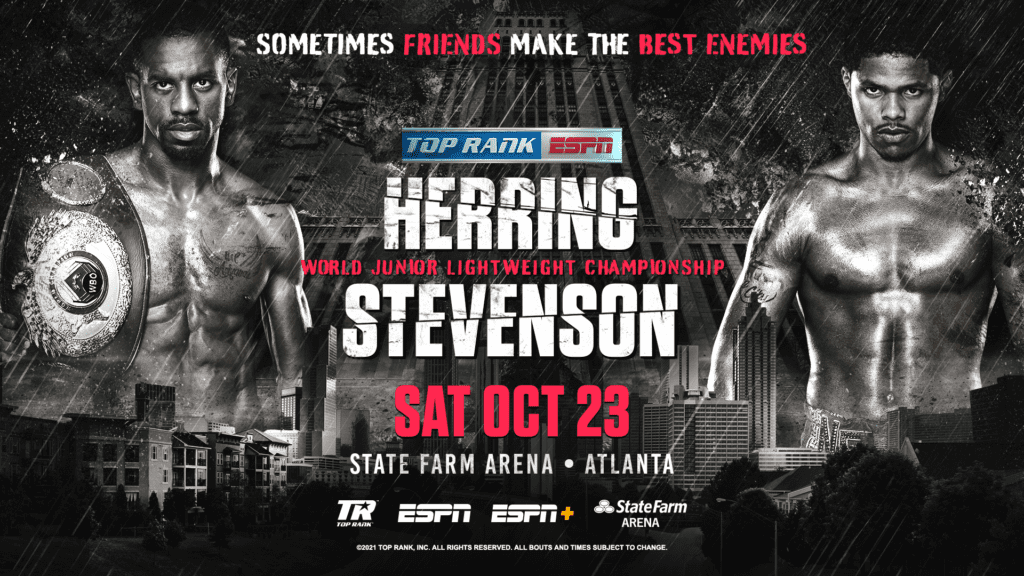 Herring-Stevenson Made Official for Atlanta

Herring will defend his WBO junior lightweight world title against former featherweight world champion Stevenson on Saturday, Oct. 23 at the award-winning State Farm Arena in Atlanta in an event promoted by Top Rank.

Nico Ali Walsh (1-0, 1 KO), grandson of “The Greatest,” Muhammad Ali, looks to make it 2 for 2 against an opponent to be named in a four-round middleweight special attraction.

🥊 @NicoAliX74 looking to make it 2-0 in the Middleweight special attraction.

Tickets go on sale Friday, Sept. 10 at 10 a.m. ET and can be purchased at statefarmarena.com

“We are thrilled to be back in Atlanta with a spectacular card headlined by a junior lightweight championship grudge match between a veteran champion and one of the sport’s supreme young talents,” said Top Rank chairman Bob Arum. “And with names like Ali Walsh, Ragan and Isley on the undercard, Atlanta’s great fight fans will see many of the sport’s most promising up-and-comers.”

Herring (23-2, 11 KOs), a U.S. Marine Corps veteran who captained the 2012 U.S. Olympic boxing team, has made three defenses of the world title he won via decision over Masayuki Ito in May 2019. After a challenging 2020 campaign that included a bout with COVID-19 and a disqualification victory over Jonathan Oquendo, Herring punched his passport in April and knocked out former two-weight world champion Carl Frampton in Dubai. He now steps up against pound-for-pound talent and 2016 U.S. Olympic silver medalist Stevenson (16-0, 8 KOs), a former WBO featherweight world champion who vacated the title last year to move up to junior lightweight. Stevenson is 3-0 at junior lightweight, most recently picking up the interim WBO junior lightweight world title in June with a shutout decision over Namibia’s Jeremiah Nakathila. Stevenson has lost only a handful of rounds since turning pro in April 2017, a dominant run that’s included victories over the likes of Christopher “Pitufo” Diaz and Joet Gonzalez.

“2021 has been good to me so far. I started the year with a big fight and a major win over Frampton,” Herring said. “I look forward to finishing out the year the same way I started it, not only with another huge victory, but as a world champion. I have nothing else to say. I’m focused on October 23 and the fourth title defense of my WBO belt.”

Stevenson said, “Jamel had to fight me, or he would’ve been stripped of his world title. I boxed him into a corner, and I am going to take his world title in devastating fashion on October 23. I can’t wait to fight in front of the amazing fans in Atlanta. Trust me, you are going to see a show, and I will become a two-weight world champion.”

Ali Walsh’s Aug. 14 professional debut drew international media attention, and he knocked out Jordan Weeks in the opening round while wearing a pair of his grandfather’s old trunks. He’ll make his ring return in a city that hosted two of Muhammad Ali’s most memorable moments. State Farm Arena sits less than two miles from the Atlanta Olympic Cauldron Tower, where Ali lit the Olympic flame at the 1996 Summer Olympics. In October 1970, Ali fought Jerry Quarry at City Auditorium, his first fight in more than three years after being banned from the ring for refusing induction into the U.S. Army during the Vietnam War. Ali Walsh’s second pro fight will come three days shy of the 51st anniversary of the Quarry fight, which Ali won by third-round knockout.

Ali Walsh said, “Atlanta welcomed my grandfather with open arms, and I am honored to fight there on a major world championship card. When Top Rank said I’d be fighting in Atlanta, I thought of my grandfather lighting the Olympic torch and his bout against Jerry Quarry. This will be a special evening for my entire family. The legend lives on.”

Conor Benn -‘I’l Let My Fists Do The Talking”
Is Oscar Valdez Defense About To Be Off For Banned Substance?
Advertisement
To Top