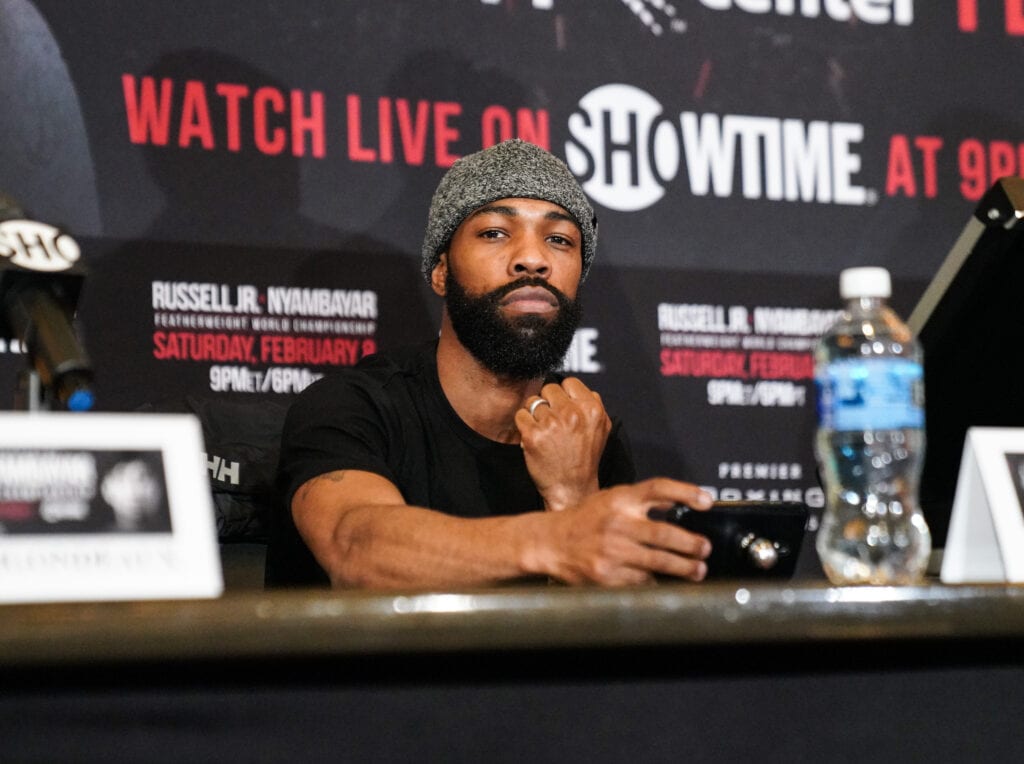 Long reigning WBC featherweight champion Gary Russell Jr. is back in action on January 22nd, taking on Mark Magsayo. The focus of yesterday’s media call was the universal question we ask every time we sporadically see him.

Where has Gary Russell Jr. been?

Speaking with the media via Zoom yesterday, we found out dealing with many family issues outside the ring. Russell’s father and trainer have been dealing with diabetes complications and were training himself to prepare for Magsayo.

“Camp has been hectic, man,” Russell Jr. said on zoom to Keith Idec of Boxingscene. “It’s been a lot going on. You know, pops, pops, he been dealing with amputation. He got his foot amputated. He’s my coach as well as my dad. I’ve been somewhat training myself. And then my father, his health isn’t the best, so he’s getting in the gym as much as possible. But we grinding, man. We ready. No complaints, no whining. We gonna get to it.”

It isn’t going to be a one-man corner like the old Bugs Bunny cartoons for Mr. Gary Russell as likely his younger brothers – bantamweight contender Gary Antonio Russell and junior welterweight prospect Gary Antuanne Russell – will work his corner, along with Rodrigo Mosquera. He regularly works his corner alongside Russell Sr.

“My brothers will definitely work the corner,” Russell Jr. explained. “Rodrigo Mosquera, he’s always been a good guy. He always help work our corner with me as well. My father, he’s a warrior at heart. He’s a warrior at heart. He’s supposed to be going back to the hospital to get checked out. He’s gotta get some stuff done, but he’s decided that he’s not gonna get it done until after the conclusion of this fight. He felt like he missed enough time in the training camp, and he wants to dedicate the rest of whatever he do have to me and to the rest of this camp. You know, I’m grateful for that. It means a lot to me. And once again, we use it all as fuel.”

*As far as I know, my father will be there. His health is not the best,” Russell stated about his father and trainer being ringside for the fight.

What does the champ want after Magsayo?

“It has been very difficult. I tell people all the time; Life is like boxing. You have to keep your chin down and fire back when you can,” Russell chimed.

Once you find out what was going on with Russell’s family on that level, you tend to brush aside the elephant in the room, which is the rare occurrence of a Gary Russell Jr. title defense. Russell’s last fight was before the pandemic in Allentown, Pa, and he spoke on what took so long.

“I can’t force these guys to compete. I need a dance partner. I can’t go in there and shadow box,” Russell Jr. joked.

The biggest takeaway outside of Russell wanting a rematch with Vasiliy Lomachencko and local rival Gervonta Tank Davis was the quote he advised fans to do for future fights.

“Fans need to boycott some of these fights where you know the outcome already,” Russell mentioned.

As this goes to publish, the current contest has Russell as a roughly 4 or 5 to 1 favorite at most sportsbooks to retain against Magsayo. Not precisely a 50/50 here, as many don’t think Magsayo can keep up with the hand speed of Russell. Russell on the media call confirmed as much to Cynthia Conte of The Ring when she asked about it as well, to which Magsayo sitting alongside man of all things MP Promotions. Sean Gibbons countered by simply saying, “you’re wrong.”

Well, find out if this is the first upset or another boxing lesson for Russell on the 22nd, but until then, life is like boxing and just shoulder roll with the punches.