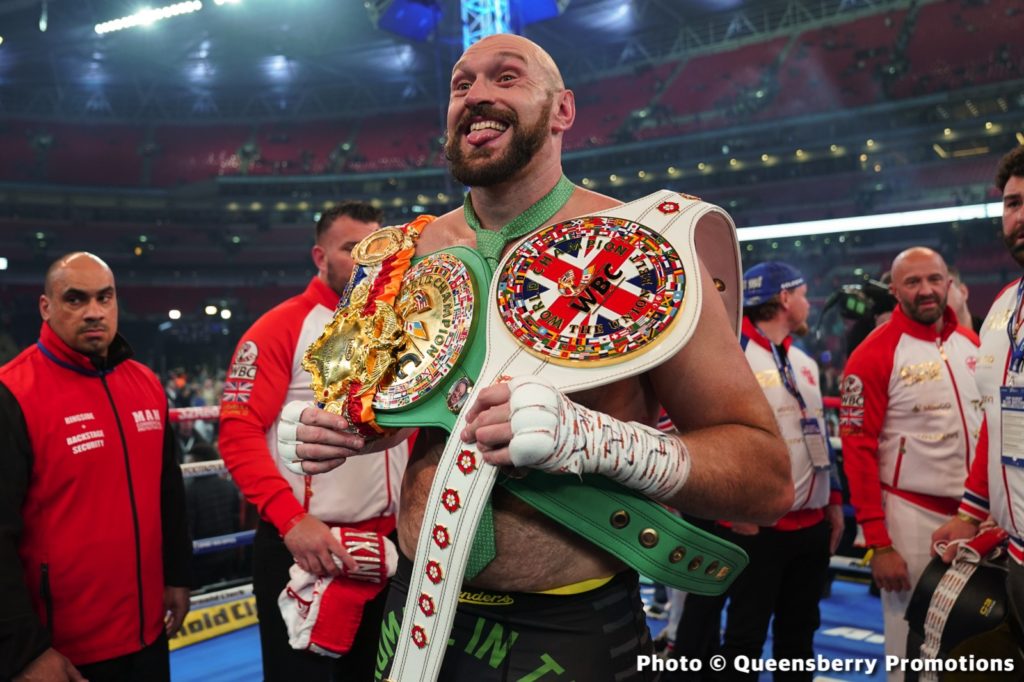 Heavyweight champion Tyson Fury reiterated his claims that he would retire from boxing on Saturday following a one-punch sixth-round stoppage of mandatory challenger Dillian Whyte before a European-boxing record crowd of 94,000 at Wembley Stadium in London, but he certainly left himself some wiggle room.

While Fury, who dropped Whyte with a heavy right uppercut, may not engage in an official boxing match in the future – if he is to be believed – he certainly is still interested in combat of some kind.

During his post-fight in-ring interview with ESPN on the United States pay-per-view telecast, the 6-foot-9, 264-pound he motioned to another large man standing a few feet from him in the ring and asked him to join him.
It was the 6-4, 260-pound Francis Ngannou, the current UFC heavyweight champion.

In the months before Fury faced British countryman Whyte, there had been chatter about a possible fight between the two kings of their combat sport. After the victory Saturday night, Fury pushed it even more with full co-operation from Ngannou.

Apparently, in Fury’s mind facing Ngannou would not be breaking his word to retire because it would not be a straight-forward boxing match.

Hear our post-fight analysis and more discussion on Fury’s possible retirement and whether Ngannou might be whom he fights next on the “Fight Freaks Unite Recap” podcast by clicking below:

Ngannou, who currently is under contract to UFC and it remains to be seen if a fight with Fury is even doable in the near future, claimed the eventual fight would be “a hybrid fight with different type of rules. MMA gloves in a ring. Mix it up, a little different.”

“We’re gonna find out who’s the baddest motherf—– on the planet,” Ngannou said.

While Fury (32-0-1, 23 KOs), 33, may have interest in that sort of spectacle, another boxing match, even against the winner of the expected July rematch between three-belt titlist Oleksandr Usyk and former unified titlist and Fury’s British countryman Anthony Joshua, does not interest him he said.

“I promised my lovely wife Paris of 14 years that after the (Deontay) Wilder III fight (in October) that would be it. And I meant it. We had a war. It was a great trilogy. And I meant that,” Fury said. “But, I got offered to fight at Wembley, at home, and I believe that I deserved (it), that I owed it to the fans, I owed it to every person in the United Kingdom to come here and fight at Wembley. Now it’s all done. And I have to be a man of me word. And I think this is it. This might be the final curtain for ‘The Gypsy King.’ And what a way to go out! A big thank you to the United Kingdom.”

Fury repeated his vow that he is done boxing at his post-fight news conference, where he and trainer SugarHill Steward appeared shirtless.

“I’ve given 20 years to boxing, amateur and professional,” Fury said. “I’ve had me brains knocked out, I’ve been put down, I’ve been rocked, I’ve been cut. I’ve had tough fights, I’ve had draws, I’ve had wins. I’ve boxed all over the world. How much blood can you get out of a stone?”