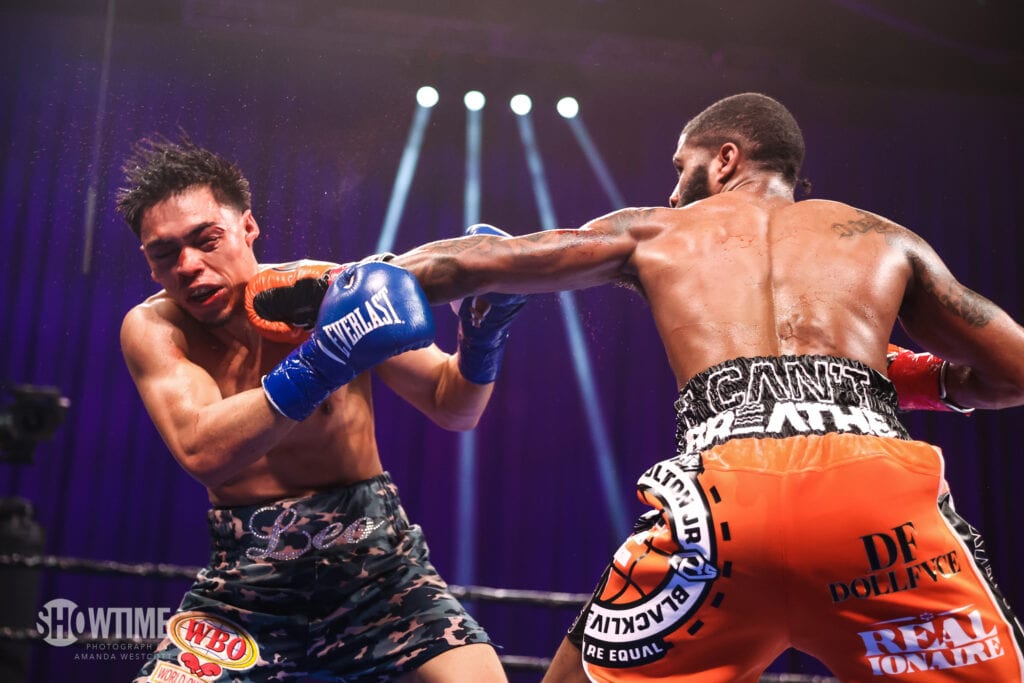 Somebody’s “0” had to go, and that was the one of reigning champion Angelo Leo as Stephen Fulton defeated him to crown a new champion at 122 pounds in an absolute brawl.

Fulton won by unanimous decision with scorecards of 118-110 and the other two with 119-111. The fight in the ring looked loser than the cards but was an absolute war for thirty-six minutes.

The main event that aired on  Showtime from the “Fightshpere” at the Mohegan Sun Arena had this WBO Jr. Featherweight title on the line and was an anticipated matchup that was supposed to happen back in August.  The wait was worth it as the contest is in the hopper early for anyone’s “Fight of The Year: conversations.

Fulton (19-0, 8 KOs) came into this one, the slight favorite on the gambling books, and went in from the opening bell on the attack.  However, Leo (20-1,( KOs) was willing to do the same same as the defending champ.  What transpired over thirty sic minutes was an all-out firefight.

You wanted a fight, @angeloxleo1 and @coolboysteph are giving you one to remember! Almost 6 months in the making and it was worth the wait 💥. #LeoFulton #PBConShowtime pic.twitter.com/vVap3yD59H

The fight started with some inside work between them both, and this was toe to toe action from the jump. It surprised me in all honestly, as both guys were known as counter-punchers. Blow by blow man Mauro Ranallo refereed it early as “trench warfare,” and this definitely was. The fourth round had shown both guys caught, and that is when this fight picked up. That continued into the 5th round as well.

Fulton’s corner after the end of the 5th advised that they wanted him to box more on the outside, but that wasn’t happening once the 6th came around. It was a tough fight to score as many rounds could go either way as the action was relentless.

There was a cut on Leo’s left eye from a clash of heads early in the opening round, but that wouldn’t play a factor in this contest. Fulton, as the fight went on keep landing more and more body shots, which is similar to what Leo was doing.

Loe’s corner mentioned to him after the 10th round that they were down on the cards and mentioned that to win the fight and retain that, he needed to knock out Fulton. Leo tried to land a shot while he had Fulton on the ropes, but that didn’t get the knockdown to close out to contest.

Just how one-sided did the fight turn out to be? Well, it’s rare in a title fight, but all three judges gave the challenger every round out of the final seven of the fight.

Fulton said he felt himself pulling away around the 5th-6th round. The judges felt the same way#LeoFulton #AndTheNew pic.twitter.com/5NxUu4rVWz

We had Raul Marquez from Showtime on the latest podcast, and he mentioned that Fulton could call out any champion at 122. While I think that would be awesome, I’d pay attention to see if Danny Roman or Michael Conlan next up on the WBO side of the rankings scale.

Another name is to keep an eye out on is Ra’eese Aleem, who looked dominant in dismantling Victor Pasillas to a stoppage win in the co-main event of the broadcast.

Showtime’s Marquez: Leo-Fulton Winner Can “Call Out Other Champions”
After His Saturday Win Plenty Of Options For Stephen Fulton
Advertisement
To Top