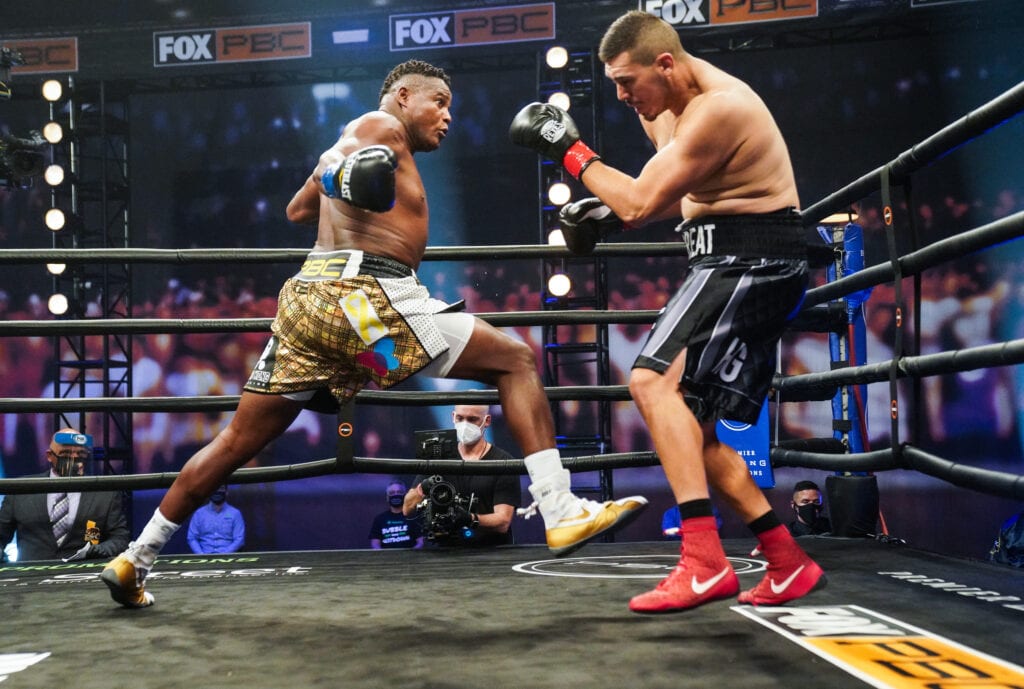 Suspicions arose Saturday night in the Premier Boxing Champions Heavyweight main event when Alexander Flores went down and out in less than a minute to Luis “King Kong” Ortiz. Now, the California Athletic Commission has launched an investigation and withheld Flores’ money, for now.

Mike Coppinger of the Athletic reported first that CAC director, Andy Foster, confirmed Monday night  a purse withhold after Flores went down from a body punch and refused to continue after the eight count,

Breaking: Alexander Flores’ purse was withheld after his KO 1 loss to Luis Ortiz, and a commission hearing is forthcoming, CSAC’s Andy Foster tells @TheAthletic. Flores was KOed 45 seconds into the PBC on FOX main event and the conclusion drew questions.https://t.co/oCt4E7XHGw

As our Marquis Johns wrote about the debacle finish Saturday,

“A body shot to the left side of Flores sent him down in a bag of rocks and Flores didn’t beat the count of referee Thomas Taylor and that was it.

After the fight, Fox Sports reporter Heidi Androl mentioned that Flores complained of trouble with his eye before went down. Then, replays showed that he had been hit by the bicep of Ortiz. Either way, Flores was taken out in quick fashion.

For Ortiz, this was a get back fight since his last outing last November where he lost to former WBC champ Deontay Wilder in their rematch in Las Vegas. On the broadcast, Compubox while unofficial, showed a shutout of 2 to 0 in favor of Ortiz.”

You read that last sentence correct: Ortiz landed two punches with the second one being the infamous body shot.

There obviously will be a standard review of the post fight medical exam on Flores, and hear from the fighter about his version of what happened in less than a minute. The 30-year-old Flores was also knocked out in devastating fashion by Joseph Parker in New Zealand in December of 2018.

This is not the only recent controversy involving the California commission and a fight that ended very quickly under dubious circumstances.

In July, Seniesa Estrada demolished Miranda Adkins with a 1-2 combo in just seven seconds on the DAZN/Golden Boy Promotions card from Indio, California.

It was quickly revealed after that the 42 year old Adkins’ 5-1 resume’ was basically a professional fabrication and that she had not fought any legitimate boxers in a sanctioned fight.

Robert Garcia, the Matchmaker for Golden Boy, who put the fight together on short notice when Estrada’s original opponent Jacky Calvo, could not fight because of a knee injury, took the blame for the lapse in credibility of Estrada’s opponent.

But still the California commission and Foster, sanctioned the fight without much diligence on their part.

Still, unlike the Flores situation, Adkins was clearly KO-ed and no a question of legitimacy of the win for Estrada.