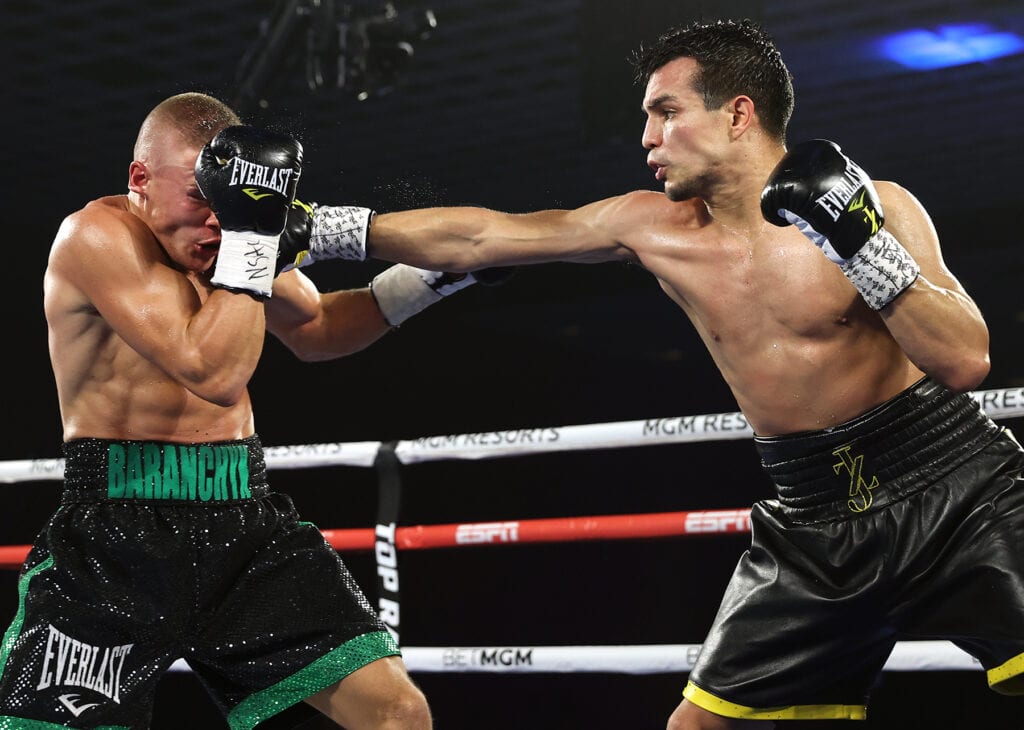 Fight Of The Year: Zepeda-Baranchyk

It had to wait out a few months, but the 2020 Fight of the Year is still one that I wrote about back when it took place back in October with the absolute slugfest between Jose Zepeda and Ivan Baranchyk.

I have already gushed over this fight back in October and its aftermath, but let me provide a different spin on why, after the additional bouts took place, this bout still stands up as we wrap up the calendar year of 2020.

On October 3, inside what has been affectionately called “The Bubble” of the MGM Grand Casino in Las Vegas, two top ten 140 pounders closed out the fight card, which looking back on the card as a whole, had little else to remember.

Actually, I’ll take that back, former UFC fighter Mitchell Sipe took out a man named Jimmy Barnes in under a minute in what looked like the old Toughman fights on FX back in the day. Outside of whatever that mauling was, this Zepeda-Branchyk fight was one that stole the show.

Little did I know, it would steal the year.

The opening round of this contest, it looked like a quick night for Barnachyk, as Zepeda got knocked down twice in the first three minutes. Not just knocked down, but hit with shots that made this looked like this wasn’t going to go distance.

It didn’t, and in the second round, the tide turned completely.

Zepeda landed a left to send Baranachyk down again, which referee Kenny Bayless did count as a knockdown. From there Zepeda looked to close in on another knockdown, but was caught by Baranachyk with a counter left and was sent down himself for the third time in the contest in just two rounds.

Once the bell rang to close out the second round, you just knew watching it that this fight was something special.

This frantic back and forth would continue for five total rounds until Zepeda landed a knockout of the year contender left that crumpled Barnachyk to end the night. This would be after both fighter would exchange eight knockdowns total and in fact would’ve been nine but not for Bayless missing one that ruled a slip. Just absolute bedlam.

One last look at the finish to 2020’s Fight of the Year, because this slo-mo is just wild 😮 #ZepedaBaranchyk pic.twitter.com/VLsapQP9Ss

We spoke with the man on the blow by blow for the fight that aired on ESPN Plus Bernardo Osuna back in November, and we asked him about calling this experience ringside at The Bubble:

“I called it unbridled offense for four rounds and the two minutes and fifty seconds that it lasted,” Osuna said on The Big Fight Weekend Podcast. “As a broadcaster, it was a gift from the boxing gods. For all the times I had to drive to Eagle Pass (Texas) to call a fight and stay at a crappy hotel over my twenty some odd years of a career, this is the boxing gods saying ‘Hey Bernado, here you go, buddy! Take this one!”.

Osuna couldn’t have been more right about this.

Zepeda stated after the fight, he wants a rematch with current unified champion Jose Ramirez or would move down to 135 to take on the unified champion Teofemo Lopez. While I don’t see either of those scenarios happening next for Zepeda, he does hold the distinction of being the champion of my “Fight of the Year.”