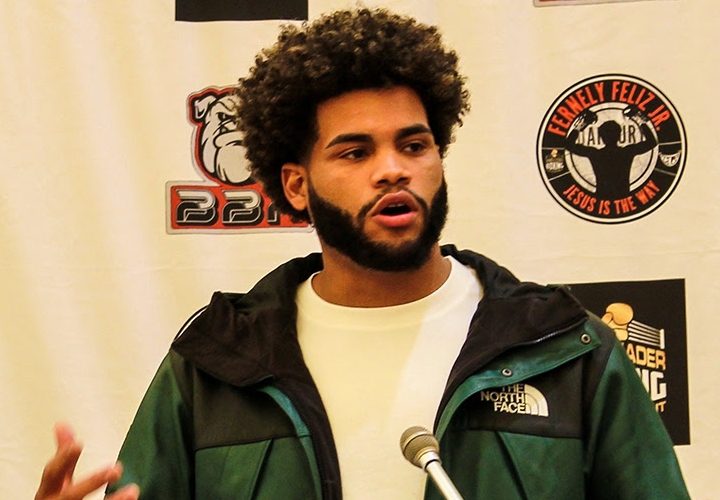 The 24-year-old announced that he was going pro at the beginning of the month in his hometown of Danbury, Connecticut, and speaking with Big Fight Weekend, he felt he was ready after a good amateur carrer.

“It was just time.,” Feliz said to Big Fight Weekend. “I felt lie it was time to showcase my talents at a pro-level.”

Fernely Feliz Jr. gets to follow in his father’s footsteps as Sr. was a former heavyweight, going 23-9 and challenging once for a world title against John Ruiz. Feliz emphasized to me how important his dad has been.

“He’s been such a huge influence in my life and a big help. He gives me confidence day in and day out and reminds me he’s been in there with top dogs and top-level guys.  I couldn’t be any more thankful for a guy like him,” Feliz said.

DANBURY LET’S GOOO!!!
THIS IS JUST THE BEGINNING!

This has been a dream of mine for a long time! I will not let you guy’s down! Exited for all of you to come on this journey with me!

Little is known about Kirnon, but per his Boxrec, he hasn’t won since 2016 but was last seen in the ring against Jared Anderson, where he was stopped in one round back in 2019.  Feliz did break down to me what he wants to avoid once the bell rings in his pro debut.

“Not to overthink it and do what you have planned. It’s so easy to get overwhelmed from going amateur to pro bu remember that it’s just the same and just have fun,” Feliz noted.

Feliz is looking to be active and off and running. After this contest, he is slated to have a quick turnaround and be in action Christmas night on the Vito Mielnicki Jr. card in New Jersey against someone to be named later.