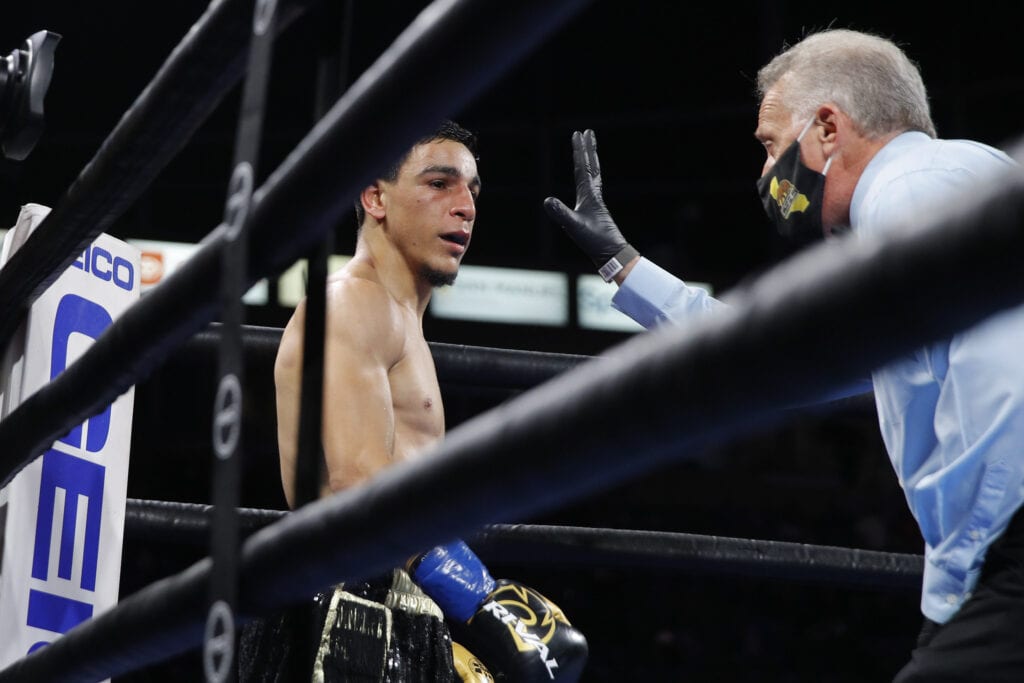 While the Nonito Donaire fourth round kayo of former unbeaten WBC Bantamweight champ Nordine Oubaali Saturday night in Carson, California, was dramatic and historic, it isn’t without a blemish. That’s, because the key punch of the fight, clearly came after the bell to end the third round.

First, Donaire should be lauded for holding off “the hands of Father Time,” and getting the victory to become the oldest fighter (38 years young) in boxing history to ever hold the Bantamweight title. However, the key sequence that set into motion his KO and the referee, veteran Jack Reiss of California’s inaction on doing anything about it, is what’s at issue.

Watch for yourself as the Filipino star Donaire scores the first knockdown of Oubaali and then, the “late hit” just a second after the round is over,

As the video shows, Donaire had clearly knocked down and hurt Oubaali late in the third and the champ was on shaky legs late in the round. But, he did land a solid left to stop Donaire in his tracks with just seconds to go.

That’s when the bell rang and a second later a controversial left from Donaire landed flush on Oubaali’s jaw dropping him face first.

Two things are apparent: 1. Reiss, who is a veteran of dozens of championship fights mostly in California, isn’t in proper position in the final seconds of the round to jump between the fighters, when he hears the bell. and 2. He clearly believes that the punch was at the bell and orders everyone to stay out of the ring, while administered the count on Oubaali.

Oubaali clearly dazed, barely beat the count and didn’t know where his corner was after the late punch. In fact, Reiss can be heard audibly trying to help him find his own stool.

Now, the argument can be made that the now three time 118 lb. world title holder would have bombed out Oubaali later in the fourth round, etc. anyway. However, that’s not the point.

The point is that the punch that damaged the champ, as he clearly takes a rocket to the jaw in the split second after hearing the bell. And, it was one that put him 95% on the road to being stopped in the 4th round. And, that’s exactly what eventually happened with Reiss stopping the fight after the third knockdown, as he could see Oubaali was done.

Had he been closer to them and heard the bell, etc. Reiss would have been in position to rule the Donaire punch a foul. And, while it wouldn’t have likely resulted in a DQ of Donaire, he could have taken a point off, etc.

None of that obviously happened.

This was the second time in as many weeks, where a veteran U.S. referee’s shaky performance factored into a key knockdown of the fight.

Our Marquis Johns wrote about Nevada based Kenny Bayless failing to stop now Undisputed Jr. Welterweight Champ, Josh Taylor, from knocking down Jose Ramirez in the 6th round of their massively important fight. This despite the fact that Bayless was audibly hearing saying “break” to the fighters and actually touched Ramirez’s right shoulder.

Ramirez, worse than Oubaali, relaxed and let his guard down and Taylor hit him with a left uppercut that dropped him for the second time in the fight. That knock down proved critical for a 10-8 round on all three judges cards for Taylor and helped him win a narrow unanimous decision.

Back to Reiss, he’s highly respected, working primarily for Premier Boxing Champions and their biggest bouts. That included being the third man in on the Patrick Teixeira-Brian Castano WBO Jr. Middlweight title fight earlier this year in February. And, also recently, he worked the first Deontay Wilder-Tyson Fury WBC Heavyweight Title fight in L.A. in December 2018.

And, the last thing that Reiss or Bayless or any referee at the highest levels of any sport want is for their performance to even be mentioned, much less belabored. This is, because that almost always means that they did something wrong. Yet, that’s where we are.

This isn’t the first time we’ve seen a punch after the bell bring controversy into a recent world title fight. Here’s an entire video “top 10” of them, including recent ones where the fight ended because of it. However, several of them were later overturned for being after the bell, rematches ordered, etc.

Again, Donaire was likely going to win Saturday night after scoring the initial knockdown of Oubaali. However, the “late shot” at the end of the round clearly damaged his opponent.

And, maybe the WBC will see fit to have these two fight, again.

Then, again, at the advanced age of near 40, Donaire may have no interest in that fight, but rather a rematch with Unified Bantamweight champ, “The Monster,” Naoya Inoue of Japan for significant dollars.

Still, Oubaali was the undefeated 118 lb. champ who had never been down in his pro career, and that deserves some consideration after what happened at the end of the third round.