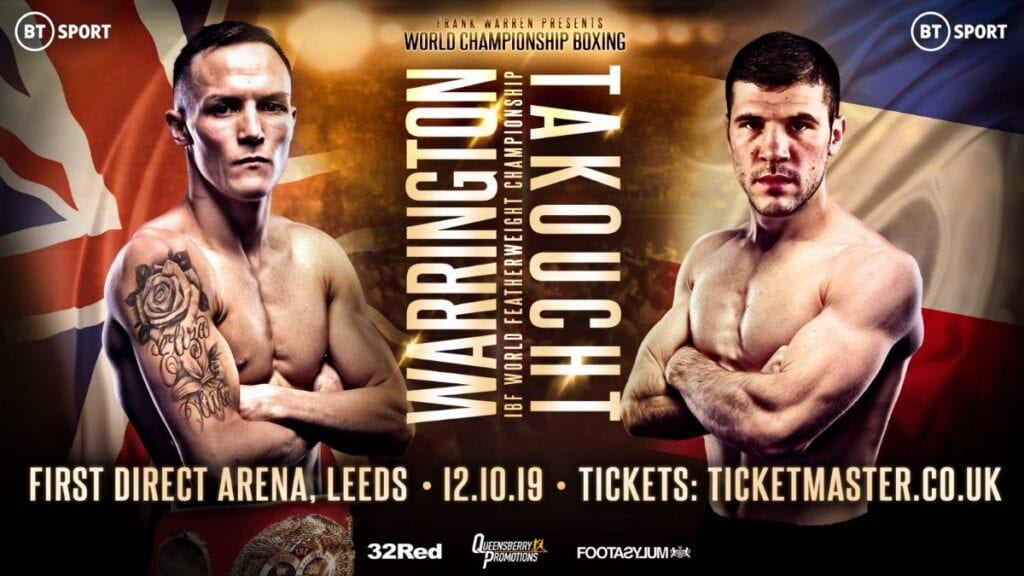 Warrington will make the third defense of his title Saturday against Sofiane Takoucht at the First Direct Arena in his hometown of Leeds, England. Warrington-Takoucht and select undercard bouts will stream live on ESPN+ starting at 2:30 p.m. ET/11:30 a.m. PT.

Warrington (29-0, 6 KOs), nicknamed “The Leeds Warrior,” won the world title in his hometown last May with a well-deserved split decision victory over Lee Selby. He returned later that year and bested former two-weight world champion Carl Frampton by unanimous decision in a Fight of the Year contender. In his last outing, Warrington edged Kid Galahad via split decision. Takoucht (35-3-1, 13 KOs) has won eight consecutive bouts and is a former European and IBF International featherweight champion.

This is what The Leeds Warrior got up to when he spent the day with the army 🏃‍♂️ #NoFilterBoxing pic.twitter.com/cMdRT2zdzm

In other ESPN+ streaming action on the Warrington-Takoucht card:

Zelfa Barrett (22-1, 13 KOs) will make the first defense of his Commonwealth super featherweight title in a 12-rounder against Scottish veteran Jordan McCorry (18-6-1, 4 KOs).

Harris (16-0, 8 KOs) is coming off a career-best win June 1 over former world title challenger Angel Moreno, and he is taking yet another step up against Barnes (6-2, 1 KO), who will have the crowd behind him. Barnes won a pair of Olympic bronze medals as an amateur, but in a bid for the WBC flyweight world title last August, he lost via fourth-round knockout to Cristofer Rosales. He dropped a split decision to Oscar Mojica in his comeback bout but rebounded to decision Joel Sanchez over six rounds in August.

WEIGHED IN ⚖@jayharris19 and @paddyb_ireland were both in superb shape as they stepped on the scales for their title showdown.

The Harris-Barnes stream will also include the following bouts:

Former lightweight world champion Terry Flanagan (34-2, 14 KOs) will look to make it two wins in a row versus Michael Ansah (17-9-2, 11 KOs) in an eight-round lightweight bout.

Use the hashtags #WarringtonTakoucht and #HarrisBarnes to join the conversation on social media.

Loder reflects on latest victory for lightweight belt
Andy Vences Training Camp Quotes
Advertisement
To Top
We use cookies to ensure that we give you the best experience on our website. If you continue to use this site we will assume that you are happy with it.Ok