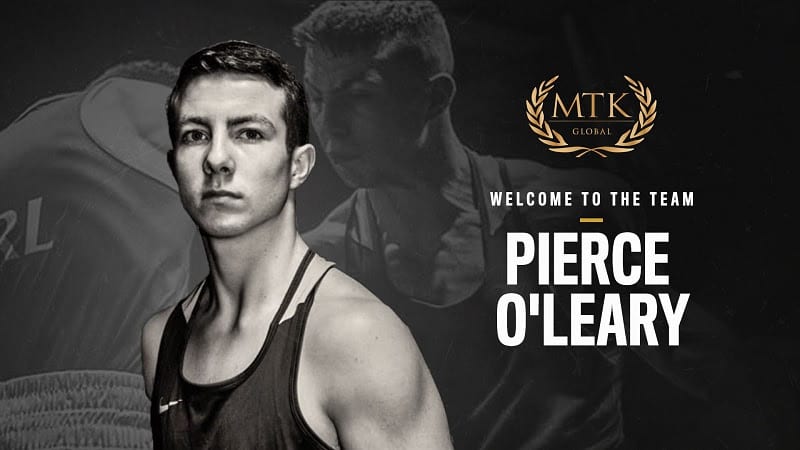 The 19-year-old Dublin sensation has been widely billed as one of the country’s most talented prospects and is already noting out a timeline towards a world title shot having foregone the chance to compete at the world and Olympic level.

NEW SIGNING ?️@MTKGlobal is delighted to announce the signing of nine-time Irish amateur king @pierce_oleary as he joins the professional ranks.

O’Leary said in a press release: “I’m very excited. It’s my dream and it’s time to start cracking on and get what I’ve always wanted.

“It’s fantastic to have the crowds like there are at these shows. It really gets the hunger going. I’ll have good crowds behind me and I’m so excited for it all.

“I’m suited to the professional game. The amateurs have been good but as a professional, it’ll be 120% better. I want to be fighting for a world title by the time I’m 24.”

MTK Global Professional Development Coordinator Jamie Conlan said to the media:“This is another great signing. Anyone who follows Irish boxing will know what a talent Pierce is and we believe his style is perfectly suited to shining as a professional.

“We look forward to helping Pierce achieve his goals and unsurprisingly given his talent, those goals are pretty clear – to become world champion as quickly as possible.

“We’re very specific with who we want to sign at MTK Global. We look to bring in the cream of the crop and those with elite talent, and that definitely applies to Pierce.”

O’Leary started boxing at the age of six in Dublin’s docklands having walked past his local gym and “heard the noise.”

News on O’Leary’s first professional fight will be announced at a later time. This is a bright young prospect to keep an eye out for has been a force in the amateur ranks in Ireland.

Nova and O’Sullivan back in action in August
Canelo ready to split from De La Hoya/Golden Boy Promotions?
Advertisement
To Top