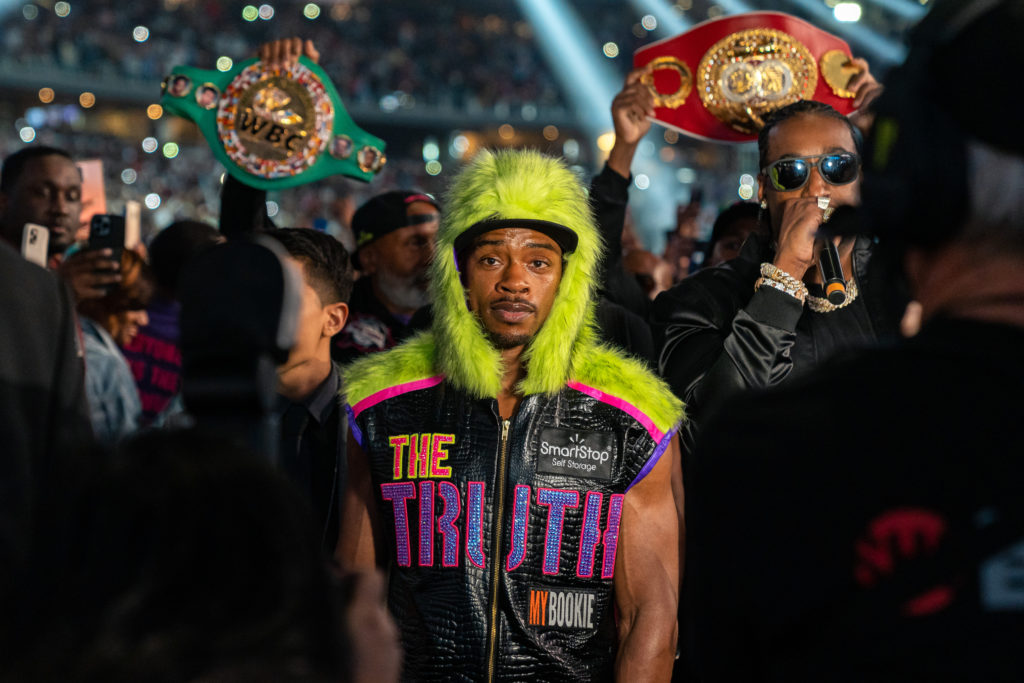 Fresh off his stoppage win on Saturday night in Arlington, TX, that made him now the WBA/WBC/IBF world welterweight champ, Errol Spence had enough of watching hall of fame fighter turned promoter Oscar De La Hoya pleading on social media for him to fight one of his fighters.

So much so, that on Monday morning “The Truth” made clear, again, he’s focused on only one future opponent for now, and that’s not a De La Hoya/Golden Boy Promotions fighter. No, it would be promotional free agent Terence Crawford.

While De La Hoya is pushing his promising, unbeaten prospect Ortiz, Spence,was busy improving to 28-0, 22 KOs with a 10th round TKO over Yordenis Ugas Saturday night. And now, he is looking at a mega-payday with Crawford.

That fight would potentially be for the Undisputed 147 lb. titles later this year and the reward would be for the winner the first time a fighter had held all the most important world championships at welterweight, since Jab Zudah in 2006.

Hear our full recap of Spence’s victory over Ugas at AT&T Stadium on the “Fight Freaks Unite” podcast by clicking the link below,

As for De La Hoya, he continues to be “shut out” from doing promotional deals with his fighter and with Al Haymon’s Premier Boxing Champions. This is no small part due to De La Hoya having previously been part of litigation trying to prevent Haymon and PBC from ever getting started.

And, “the Golden Boy” went on social media to complain that Haymon/PBC/Charlo and Showtime Boxing wouldn’t allow his broadcast partner DAZN to be part of a proposed Charlo-Munguia hybrid broadcast. It didn’t matter/work and Charlo is now fighting journeyman Maciej Sulecki on a Showtime PPV in June instead.

So, it won’t come as a surprise that Spence/PBC, which also has several other fighters like former WBA champ Keith Thurman and unbeaten star Jaron “Boots” Ennis for him to potentially fight later, won’t have any interest in Ortiz and Golden Boy later, either.