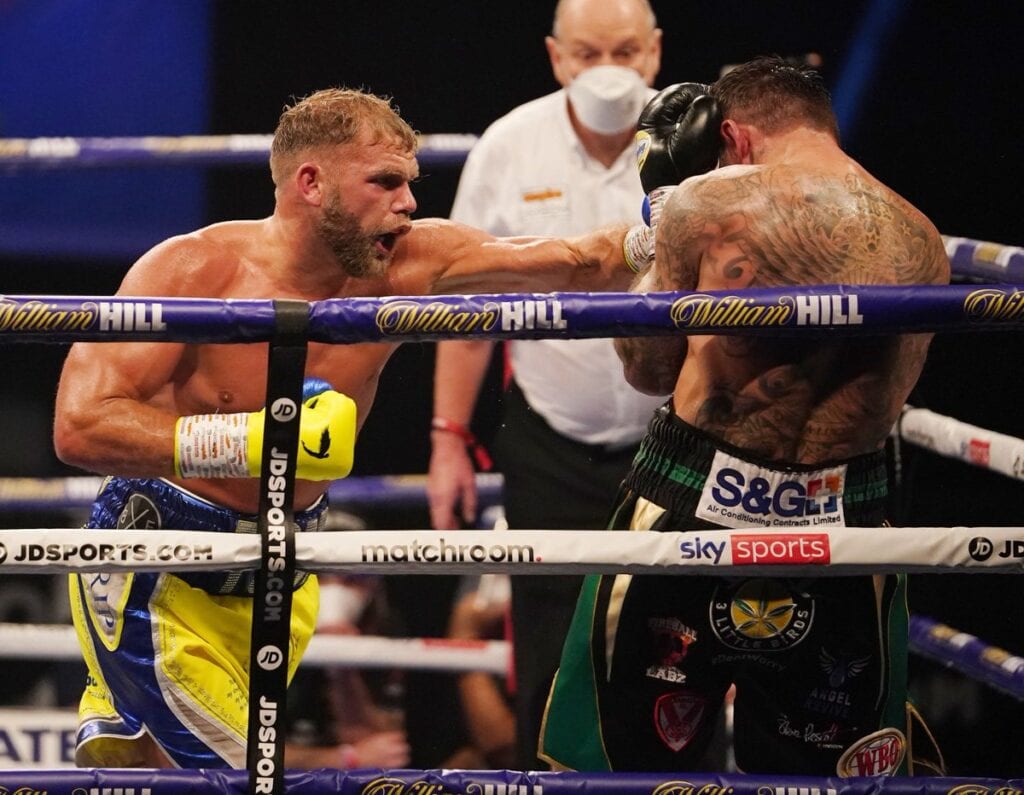 In his 2020 debut, unbeaten Friday, WBO Super Middleweight Champ Billy Jo Saunders successfully defended his crown in a largely boring 12 round decision over a nearly 40 year old journeyman. Now, the question is: what’s next for the Brit and does it mean he’ll finally fight unbeaten American WBO 160 lb. champ, Demetrius Andrade?

First, the particulars on Friday’s Matchroom Boxing main event. Saunders dominated 38 year old Martin Murray on his way to a unanimous decision to improve to 30-0. Two judges didn’t give Murray a single round in the fight and the third had it 118-110.

Tonight I tried to set a rhythm, but he is a cunning old fox and he knew how to tie you up well…. It’s not a performance I am going to be shouting for people’s names about because I have been out a year,” Saunders said post fight.

“I probably needed the rounds going into next year…The main thing is I am 30-0 and I guess I am getting luckier every fight. Let’s see if I can make a big fight, get up for it and put a shift in.”

As for if he “can make a big fight,” Saunders has blown two of those opportunities in his recent past.

Earlier this year during the early stages of the Covid 19 pandemic, Saunders had been suspended indefinitely by the British Boxing Board of Control due to the latest problems with behavior. That was eventually lifted after the board fined him £15,000p (U.K.) or $19,000 U.S. dollars, for his comments about domestic violence on a social media post earlier this year.

Saunders was also suspended for several months and fined by the BBBOC for behavior in early 2018.

The latest suspension, in part, cost him any opportunity at a previously scheduled fight with four division World Champion, Canelo Alvarez. The Canelo – Saunders fight had been tentatively set for May 2nd in Las Vegas, but was postponed initially due to the Covid-19 pandemic shutting down the sport in mid-March.

Alvarez moved on from Saunders, and now that he has freed himself from promoter Oscar De La Hoya and Golden Boy Promotions, will take on Saunders’ fellow Englishman and WBA Super Middleweight Champ, Callum Smith, in two weeks.

One fighter who does want to fight Saunders is Andrade. The two were scheduled to fight in 2018 in Boston, MA, until Saunders failed a drug test during training and the title bout was scrapped.

SI.com’s Chris Mannix got these comments from Andrade Friday after the Saunders win,

WBO middleweight champion @BooBooAndrade tells @SInow that @bjsaunders_ "looked OK … he needs to fight me next … no more excuses … February or March, at 168, I'll whoop his ass."

Andrade, who is 29-0 and has made three defenses of his version of the Middleweight World title, also has a promotional deal with Matchroom Boxing. He headlined a February card Super Bowl weekend in Miami and won easily over Luke Keeler by 9th round TKO.

And, it seems that it would be an easy bout for promoter Eddie Hearn to make.

Still, neither Saunders or Andrade is a big puncher and Saunders has repeatedly shown that he cannot stay out of trouble.

So, we wait to see what’s next for both.

Collard In Action On Stevenson-Clary Undercard
Errol Spence Dominated Danny Garcia In Return Bout
Advertisement
To Top
We use cookies to ensure that we give you the best experience on our website. If you continue to use this site we will assume that you are happy with it.OkPrivacy policy