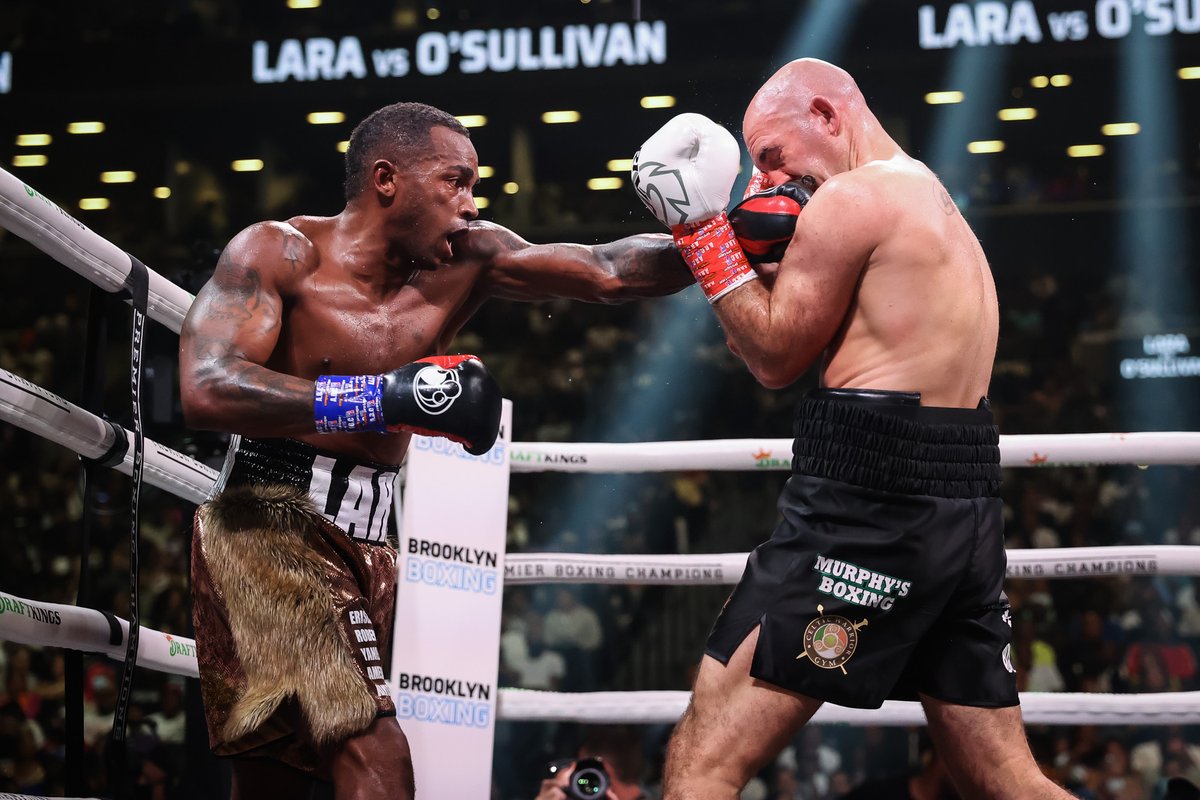 Middleweight contender Erislandy Lara came to New York wanting to get an impressive win over veteran Spike O’Sullivan. And, Saturday night at the Barclays Center in Brooklyn he did just that scoring a 8th round TKO.

The Cuban Defector Lara, who holds the WBA secondary belt at 160 lb. was in complete command against the Irish-born O’Sullivan in the scheduled 12-rounder. Lara was very effective landing straight left hands, even early in the fight and eventually, opened a cut on the bridge of the nose on O’Sullivan.

Lara scored the first knockdown of the fight landing a straight left hand late in the fourth round that staggered O’Sullivan backwards. Lara moved in and dropped him with another straight left as O’Sullivan tumbled on the canvas. Fortunately for O’Sullivan the knockdown was right at the end of the round and the bell saved him.

O’Sullivan was able to recover before the 5th round and actually was aggressively coming at Lara trying to land some rights and lefts. Still, the southpaw, who’s now based out of Miami, Florida, consistently scored with a straight right hand and lefts behind it. He also wobbled O’Sullivan with a right hook midway in the fifth round.

At that point, it seemed to only be a matter of time before he got the win.

Again, Lara, who improved 29-3-3, scored a hard, straight left in the 7th round, as once again O’Sullivan walked right into a straight left that buckled his legs along the ropes. Lara tried to follow up with a right-left that did not land, as the bell rang again to end the  round.

Clearly, O’Sullivan, now 31-4, was tired and wobbled, but yet was allowed to come out for the eighth round. Lara finished the fight less than 30 seconds into the 8th staggering O’Sullivan across the ring with yet another left hand and referee Benji Estevez waved the fight off.

Lara hopes to get into the mix for a world title shot at 160 lb., but currently he will have to wait a while. That’s because the WBC world middleweight champion, unbeaten Jermall Charlo fight later in June against Maciej Sulecki. Further, it was announced this week that unified IBF/WBA middleweight champion Gennady Golovkin will get his third bout upcoming with future hall-of-famer Canelo Alvarez in September.

That means Laura will have to wait likely into 2023 before having some type of a title shot at 160 lb.