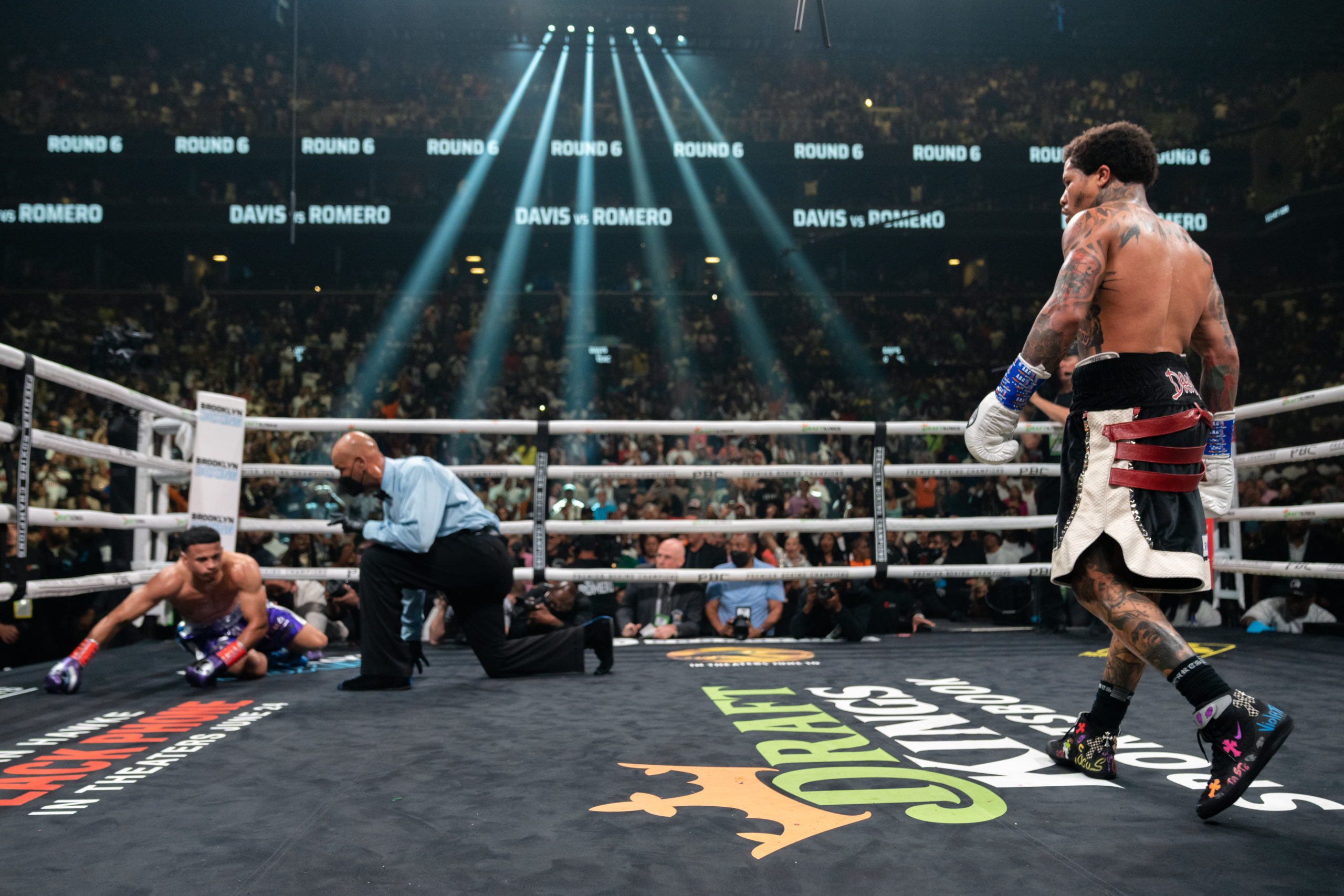 In the ring, it was fireworks for Gervonta Davis’ secondary WBA lightweight title win by 6th round TKO over Rolando “Rolly” Romero Saturday night. Meanwhile, approximately 20 minutes after the fight concluded at Barclays Center in Brooklyn, apparent gunshots just outside the arena led to chaos inside of it.

First, Davis ended the night, remaining unbeaten at 27-0 with 25 KOs, when his lethal left hand caught the previously 15-0 Romero on the chin coming in at him. Romero staggered forward and fell almost face first into the bottom strand of ropes. Romero rose dazed and unsteady and referee David Fields stopped the contest for the technical KO for Davis.

Then, after the post-fight, in ring interview for Davis, came the crazy scene inside the arena. This, as hundreds and hundreds of fans were scrambling after gunshots were reportedly heard in the concourse area of the 19,000 seat facility.

SI Boxing insider/DAZN broadcaster Chris Mannix reported that it was gunfire being heard that sent the crowd in a scary, evacuation mode.

Sound of gunshots inside Barclays Center

Mannix later followed up with more tweets that the gunfire came actually just outside the arena and that hundreds and hundreds of fans who were trying to exit, suddenly scattered back into the main, lower bowl of the arena for cover and safety.

That can be seen here by this video taken and posted just minutes after Mannix’s gunfire tweet. It shows fans scurrying all directions back inside Barclays center well after Davis-Romero fight was over and with the ring had been mostly cleared, post-fight,

Panicked crowd inside the Barclays. People running after the Tank Davis fight. Not sure what happened pic.twitter.com/OgwdwWQaU0

Another observer who attended Davis-Romero took this photo near an escalator in the concourse of the Barclays Center. And, you can clearly see damage to the outside windows, the escalator itself and also, see tables turned over with glass and other debris around in the concourse.

This obviously happened as a direct result of some of the sell out crowd having scattered due to hearing what were believed to be the gunshots.

I'm good now – just hanging out outside Barclays and chilling at this point. But you should see the inside of Barclays – that stampede left a total mess. Glass and tables broken, random slippers, shoes, bags, etc. that people left behind so they could run… insane pic.twitter.com/mXrAN6mQrr

As of early Sunday morning, there was not confirmation of the gunshots by the local Brooklyn authorities or anyone with the Barclays Center.

However, there’s no disputing that a crazy and momentarily scary scene that no one wants to see/be involved in did take place after the Davis-Romero fight.