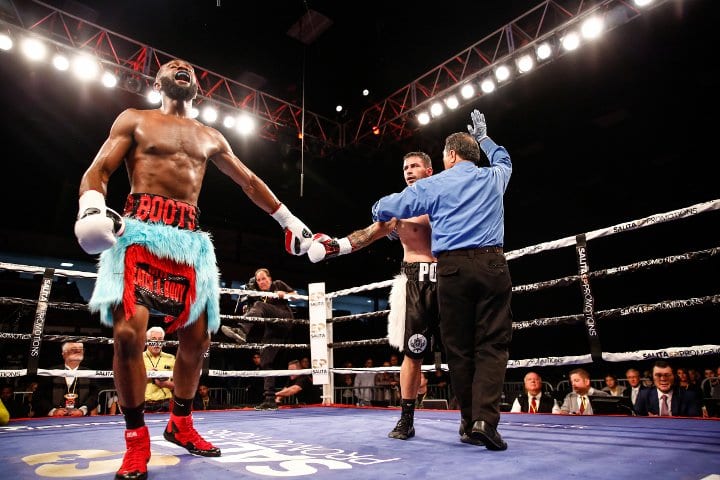 Ennis-Lipinets Tripleheader Made Official For April

Rising welterweight star Jaron “Boots” Ennis faces his most difficult test in pursuit of a world title shot as he headlines his first SHOWTIME CHAMPIONSHIP BOXING® against former world champion Sergey Lipinets. These formidable contenders meet in a 12-round, crossroads fight with welterweight world title implications on Saturday, April 10 live on SHOWTIME at 9 p.m. ET/6 p.m. PT from Mohegan Sun Arena in Uncasville, Conn. in a Premier Boxing Champions event.

In the SHOWTIME CHAMPIONSHIP BOXING co-feature, a pair of hard-hitting welterweights square off as Eimantas Stanionis takes another step up in class as he faces former world title challenger Thomas Dulorme in a 12-round WBA Welterweight Title Eliminator. The telecast opener features IBF Junior Bantamweight World Champion Jerwin “Pretty Boy” Ancajas defending his title against Jonathan Rodríguez in a 12-round bout.

The event is promoted by TGB Promotions. Ennis vs. Lipinets is promoted in association with D&D Boxing.

“Ennis vs. Lipinets is a fantastic fight in the welterweight division that pits an ascending force in Ennis against a former world champion in Lipinets,” said Tom Brown, President of TGB Promotions. “It’s a very competitive fight that presents a fascinating clash of styles and will have big implications on the future of the 147-pound division. Another sensational young welterweight will look for a career best win in the co-feature, as Eimantas Stanionis takes on his toughest test to date in the veteran Thomas Dulorme. Adding in 115-pound champion Jerwin Ancajas seeking an impressive ninth title defense against Mexico’s Jonathan Rodríguez, and all the ingredients are in place for an action-packed night on SHOWTIME April 10.”

Ennis (26-0, 24 KOs) is the latest in the pantheon of outstanding Philadelphia fighters, combining sublime boxing skills with natural power in both hands. After numerous appearances on ShoBox: The New Generation, the 23-year-old Ennis has graduated to headlining his first SHOWTIME CHAMPIONSHIP BOXING telecast. Heading into his last bout against Chris van Heerden, Ennis was riding a streak of 16 consecutive knockouts. That streak ended when the fight was stopped after the first round due to an accidental clash of heads that opened a severe cut on the forehead of Van Heerden.

“I’m excited to be back April 10,” said Ennis. “This is the type of fight I’ve been waiting for. I can’t wait to perform and put on a beautiful show. Y’all will see something special out of me come fight night. I’m excited to be the main event. It’s time for me to shine!”

All smiles from the headliner ?

The 31-year-old Lipinets (16-1-1, 12 KOs) established himself as a force at 140 pounds when he won the IBF world title with a victory over Akihiro Kondo in 2017. He lost the title to four-division world champion Mikey Garcia in 2018 and then moved up to welterweight in 2019. He served notice that he would be a contender at welterweight when he scored an impressive stoppage victory over two-division champion Lamont Peterson in 2019. Born in Kazakhstan and representing Russia, Lipinets now lives in Woodland Hills, California and is trained by renowned trainer Joe Goossen. Lipinets is coming off a hard-fought majority draw against undefeated Custio Clayton in October 2020.

“Training is grueling and I’m working hard with Joe Goossen to be at my best on fight night,” said Lipinets. “We have a tough, young fighter in Ennis who thinks I’m a stepping stone for him. But sometimes stepping stones trip you up, and I’ll be doing my best to trip him up on April 10. I’m just doing my best to get prepared for what I expect to be a dog fight. Every fan that knows boxing knows that this is going to be a real war and worth tuning in for. I expect we’ll be fighting in a phone booth at times, but I also expect him to try to use his reach and fight me at a distance at times. But no matter what he does, I’ll be ready for him.”

Stanionis (12-0, 9 KOs) has put together a string of impressive victories as he has climbed up the ranks from prospect to contender. He enters the match against Dulorme with four consecutive knockout victories. The 26-year-old from Lithuania, who now lives and trains in California, looked impressive as he picked up three solid victories in 2019, beating Samuel Figueroa via unanimous decision and scoring early stoppages against Julio Cesar Sanchez and Evincii Dixon. The undefeated welterweight has put the division on notice with back-to-back dominating main event performances in November and December 2020, when he notched ninth-round knockouts over Justin DeLoach and Janer Gonzalez respectively.

“This is my first time fighting on SHOWTIME and it feels like a dream come true,” said Stanionis. “Dulorme is experienced and has been a good fighter for a long time. On paper, this is my toughest fight, but I’m ready. I’ll be prepared for whatever he brings. With our styles, it’s going to be a war. I’m ready to fight right now. Somebody is going down and no matter what happens, the fans are going to win.”

The 31-year-old Dulorme (25-4-1, 16 KOs) has amassed a solid resume at 140 and 147 pounds during his career, climbing into the ring with world champions Yordenis Ugas, Jessie Vargas and Terence Crawford. Born in Marigot, Guadeloupe but fighting out of and representing Carolina, Puerto Rico, Dulorme rebounded from a loss to Crawford for a 140-pound title by scoring back-to-back knockouts, followed by a narrow decision loss to top welterweight Yordenis Ugas. The world title challenger is coming off a unanimous decision loss to Jamal James in his last fight in August.

“I’m very excited for this fight on April 10,” said Dulorme. “I came up short in my last fight for the title, but a win against Stanionis will put me right back into the position I want. He’s young and strong, but I have a lot more experience and I will show it in the ring and it will lead me to victory.”

Representing the Philippines, Ancajas (32-1-2, 22 KOs) was only 15 years old when he was spotted by boxing legend Manny Pacquiao. The young fighter blossomed with Pacquiao’s guidance, becoming the first world champion under Pacquiao’s promotional banner when he outpointed McJoe Arroyo for the IBF World Junior Bantamweight title in September 2016. The 29-year-old southpaw hasn’t lost since and will be making the ninth defense of his title when he faces Rodríguez. In his most recent outing in December, Ancajas stopped Miguel Gonzalez in six rounds.

“I am really looking forward to returning to the ring on April 10 for my first fight on SHOWTIME,” said Ancajas. “Everybody knows the great rivalry between the Philippines and Mexico, and I look forward to adding another explosive fight to that history. Fight fans know where all the action fights are right now, and that’s the 115-pound division. I’m thankful for this opportunity and I plan to make the most of it.”

Mexico’s Rodríguez (22-1, 16 KOs) was given the nickname “Titan” because of his prodigious power. Since suffering a disputed split-decision loss to Jose Martin Estrada Garcia in March 2018, the 25-year-old has won six straight, including a first-round knockout victory over Julian Yedras last December. He will be making his U.S. debut against Ancajas.

“This is the opportunity of a lifetime for me,” said Rodríguez. “When I started boxing, it was my dream to fight for the world title and win it. On April 10, all of my dreams and hard work will come true when I hear ‘and the new IBF champion of the world.’”