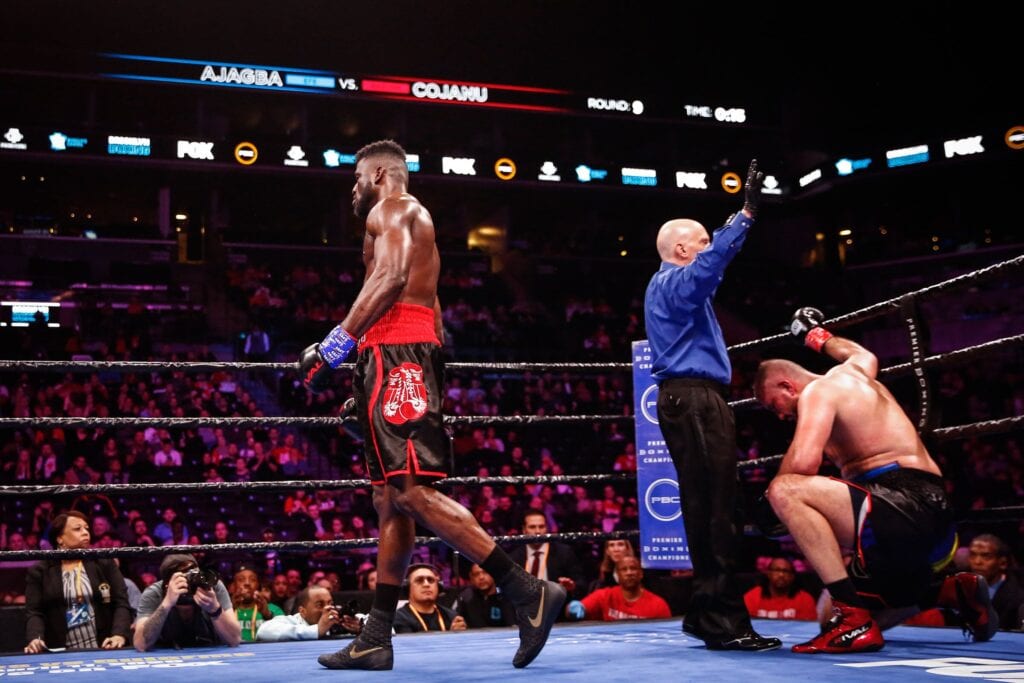 In the co-main event on Saturday night at Barclays Center, heavyweight prospect Efe Ajagba (13-0, 11 KOs) delivered a ninth-round stoppage of Razvan Cojanu (17-7, 9 KOs), knocking him down twice en route to the victory.
These fights that aired on Fox lead to the main event which saw Robert Helenius win in an upset over Adam Kownacki.

Ajagba showed the prolific power that has made him a highly-regarded heavyweight nearing a jump from prospect to contender. Cojanu came to fight and had success at various points in the action, landing hooks on Ajagba and slowing down his attack in the early rounds.

In round eight Ajagba’s offensive arsenal began to break through, as Cojanu’s left eye started to swell before eventually closing. Late in round eight, Ajagba connected on a powerful straight right hand that forced Cojanu to take a knee.

IT'S OVER! 😤@AjagbaEfe drops Razvan Cojanu for a 2nd time and the referee stops the fight. pic.twitter.com/9bXFjFzFWe

“Ronnie told me to attack the body behind the jab,” said Ajagba. “It was very effective and it started to slow him down. When he got close to me, I knew to throw more and punish him.

“Cojanu has a lot of experience. When I threw my jab, he used his right hand to block my vision, so I couldn’t throw as many combinations as I wanted. It was a good challenge.”

While Cojanu was able to make it through the round, Ajagba continued to press forward in round nine, punishing Cojanu with power shots. On the night, Ajagba out landed Cojanu in power shots by a 176 to 81 margin. A flurry by Ajagba late in the round forced Cojanu down again, and prompted referee Ron Lipton to halt the bout 2:46 into the round. Watch the stoppage here. Additional highlights can be viewed here.

“It’s up to my team who we fight next, but I want hard fights,” said Ajagba. “My team has a plan and we’ll keep following it.”

“I was well prepared and I thought I fought very well tonight,” said Sanchez. “I dominated the fight. I showed good footwork and movement and did exactly what we worked on. I expected a lot of pressure, but with my boxing ability, there was no way he was going to catch me.”

The Cuban fighter dominated with his movement, rarely being flustered by Dawejko’s attack as he bounded around the ring and avoided the incoming Philadelphia native. Sanchez was also superior in punch output and accuracy, out throwing Dawejko 352 to 242 and out landing him by a 116 to 46 margin.

“I knew he was going to fight on the outside and he stayed on the outside,” said Dawejko. “Not much to say, he just did what he had to do. He was scared that’s why he was running around. He kept jumping back and staying away, so I guess he made it easy on the judges.”

Sanchez was able to punch open a cut on Dawejko’s right eye in round five, which he continued to batter throughout the remainder of the fight with jabs and right hands. After 10 rounds, all three judges saw the bout in favor of Sanchez, with scores of 100-90 twice and 98-92.

“I didn’t want to fight Dawejko’s fight, and he realized that and it frustrated him,” said Sanchez. “He might have thought he’s faced guys like me, but there’s no other heavyweight like me.”

Carroll routs Quigg in Manchester Saturday
So when will DAZN fix the stream for fights?
Advertisement
To Top
We use cookies to ensure that we give you the best experience on our website. If you continue to use this site we will assume that you are happy with it.OkPrivacy policy