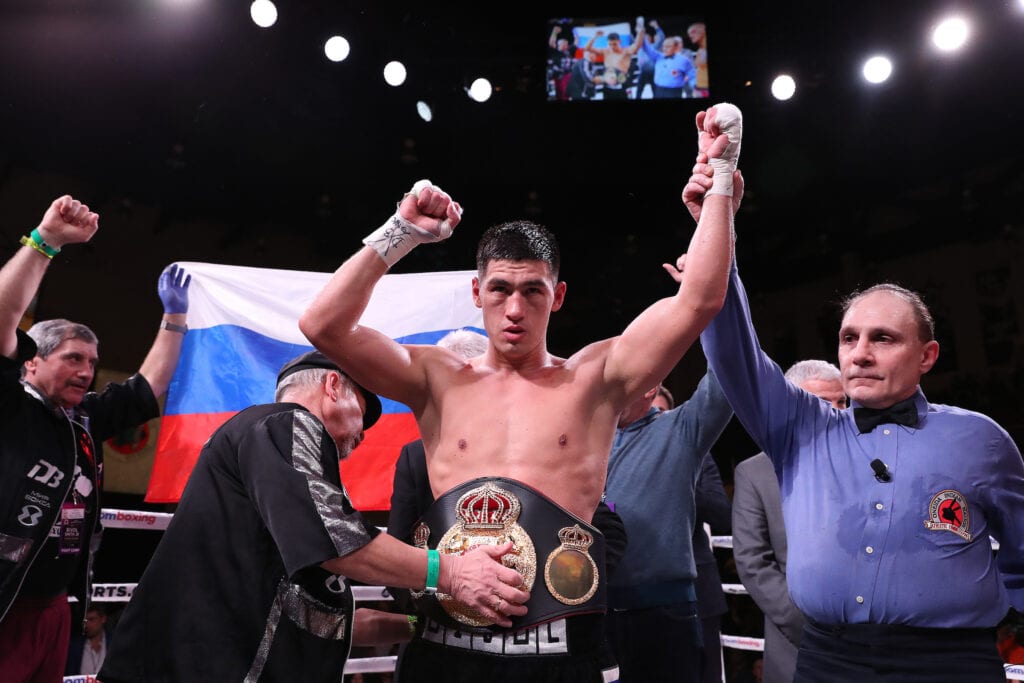 With the ongoing talks for an Undisputed Super Middleweight September 18th bout between Unified champ Canelo Alvarez and IBF World champ, Caleb Plant having apparently stalled, a Light Heavyweight World Champ is making it known that he could step in to fight.

Boxing insider and co-host of “The 3 Knockdown Rule Podcast” Steve Kim, reported first on Thursday afternoon that he’s learned that WBA Light Heavyweight champ Dimitry Bivol of Russia could be the new opponent for Alvarez in two months,

so the people with Dmitry Bivol tell me that yes, they have been talking to Canelo's side. They are ready and willing to make a deal for Sept 18. They want to make a deal ASAP and get this going… #boxing

First, it’s looking like the Undisputed clash at 168 lb. with Plant won’t be happening for that date. This, as we wrote on Tuesday that the unbeaten Plant went into great detail on the record with ESPN’s Mike Coppinger about what has been conceded in negotiations with Canelo, and yet, he won’t agree to fight.

Plant saying in part to ESPN,

“Canelo was offered the highest guarantee of his career: He was set to make $40 million plus Mexican TV rights and his Hennessy Sponsorship. No problem, let’s fight. We gave it to him. Then they wanted upside of gate and PPV revenue; no problem, let’s rumble.

“It was always agreed that it was a [title] unification; no rematch for either fighter. Towards the end of negotiations they asked for a rematch when they lose. No problem, you can have the rematch as well, I just wanna fight.”

Hear us discuss more about Canelo’s plans and whom he will/won’t be fighting in September on the latest Big Fight Weekend podcast by clicking below,

Alvarez, 56-1-2 has fought numerous times, including two memorable clashes with Gennady Golovkin (2017 & 18), in front of sold out crowds in Las Vegas in what has become traditional for Mexican “Independence Weekend.” So, he obviously would like to salvage the chance to fight on that weekend and make whatever money he can make, while staying active.

Bivol was last in action as part of the Matchroom Boxing show in Manchester, England in May. He decisioned lightly regarded Craig Richards over 12 rounds in his first fight in a year and a half. Canelo fought under the Matchroom umbrella for his last three fights, including his KO win in May over England’s Billy Joe Saunders.

Later Thursday, Lance Pugmire of the Athletic updated what he’s learned from the Russian’s camp,

Just spoke to @bivol_d manager @VadimKTeam who told me Bivol can be ready to fight @Canelo Sept. 18 but needs to know if cutting to 168 pounds "sooner rather than later."

That bit of info that the 30 year old Bivol would likely move down in weight to fight for Alvarez’s three Super Middleweight titles is interesting. Bivol has only fought as a Light Heavyweight as a pro.

Meanwhile, Canelo did previously move up to Light Heavyweight in November of 2019. That’s when he defeated another Russian, Sergey Kovalev, for the WBO title by KO.

So, the posturing and negotiating continues, but there is definitely now a realistic back-up opponent if Canelo-Plant isn’t happening for September 18th.