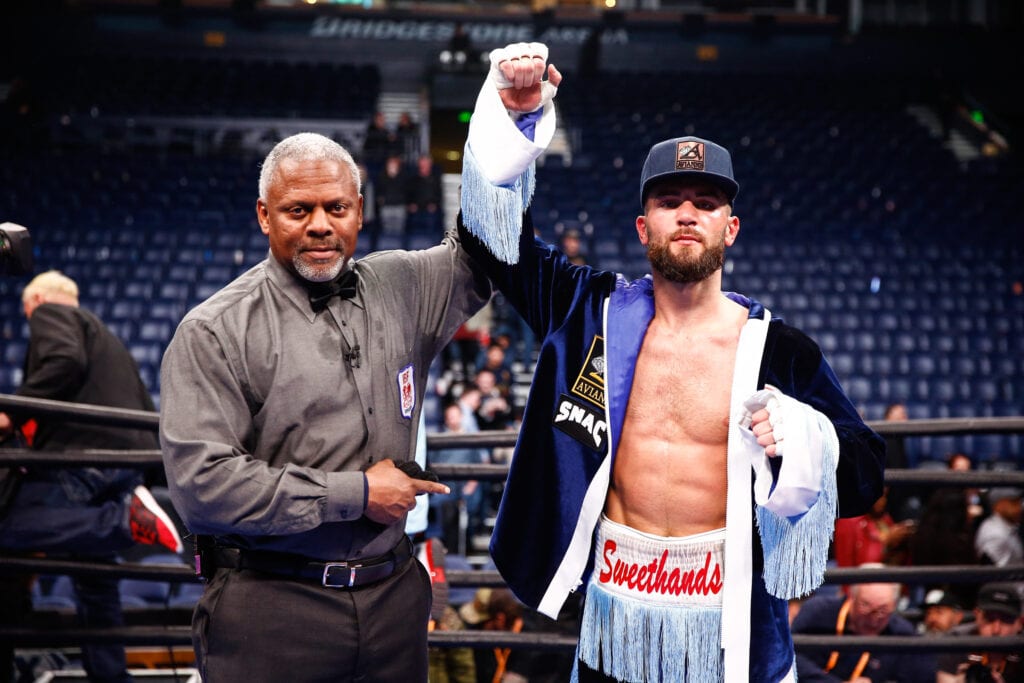 The proposed Undisputed Super Middleweight title fight between Unified champ and future Hall of Famer Canelo Alvarez and IBF World Champ, Caleb Plant is still just that- proposed. And the unbeaten Tennessean Plant made it clear Tuesday afternoon that it’s Alvarez refusing to agree to fight him after numerous concessions have been made.

ESPN’s Mike Coppinger had the details first on Plant getting specific and blaming the Mexican superstar for not finalizing for the proposed September 18th date,

Spoke to @SweetHandsPlant, who tells ESPN about the collapse of talks with Canelo Alvarez: “His bark is bigger than his bite.” Updated story with quotes:https://t.co/ZM6n3Fq28s

“It was always agreed that it was a [title] unification; no rematch for either fighter. Towards the end of negotiations they asked for a rematch when they lose. No problem, you can have the rematch as well, I just wanna fight.”

Plant told ESPN he agreed to his side of the deal two weeks ago with “no arguments about money or any stipulations….

“One that is absurd: If I get injured or sick then he gets a late replacement for the same amount of guaranteed money, but if he gets sick or injured, then we gotta wait for him,” Plant added. “We’re at seven-and-a-half weeks from the fight; we’ve lost valuable time that should be spent promoting and drug testing for a fight of this magnitude.

“I question whether legacy or money is their real motive. We’ve been waiting for him to get done with his wedding, shooting his TV show, his golf tournament and now have tried to give him everything he wants and more to make this fight. I’m more than willing, able and ready to fight Canelo Alvarez on any date. Those are the real facts and if anyone has something to say differently, we have the paperwork to prove it.”

Needless to say, the 21-0, 12 KOs Nashville native has done a tremendously detailed job of putting the blame squarely on Alvarez for the fight not being finalized.

Specifically, the details on Canelo’s price being met, the rematch clause (for him only) conceded by Plant, and even the ridiculous “one way stipulation” that if Plant is referring to on illness. That is, if he got sick, Covid 19, etc. and couldn’t fight, that he would lose the payday. Yet, Alvarez (56-1-2, 36 KOs) would be allowed to recover and still fight Plant later under the same circumstances, really showing how ridiculous it’s gotten.

Alvarez has fought his last three fights partnering with Eddie Hearn and Matchroom Boxing and DAZN streaming for wins over England’s Callum Smith and Billy Joe Saunders, as well as Turkey’s Avni Yildirim. In all of those fights, Alvarez controlled every aspect financial and otherwise of those bouts.

However, this circumstance is different, as Plant is aligned with Premier Boxing Champions, who wants to have Alvarez fight on PPV and have options on future fights beyond this one with Plant.

It doesn’t appear that Canelo will have much of a defense on any of that and Plant is further correct that we are now under two months from the date with nothing announced for September 18th, allegedly in Las Vegas. For their part, PBC has been anxiously negotiating and waiting for the fight to be able to be agreed to/start promoting.

But, now we wait for the four division world champ to either agree or reveal what he intends to do instead?