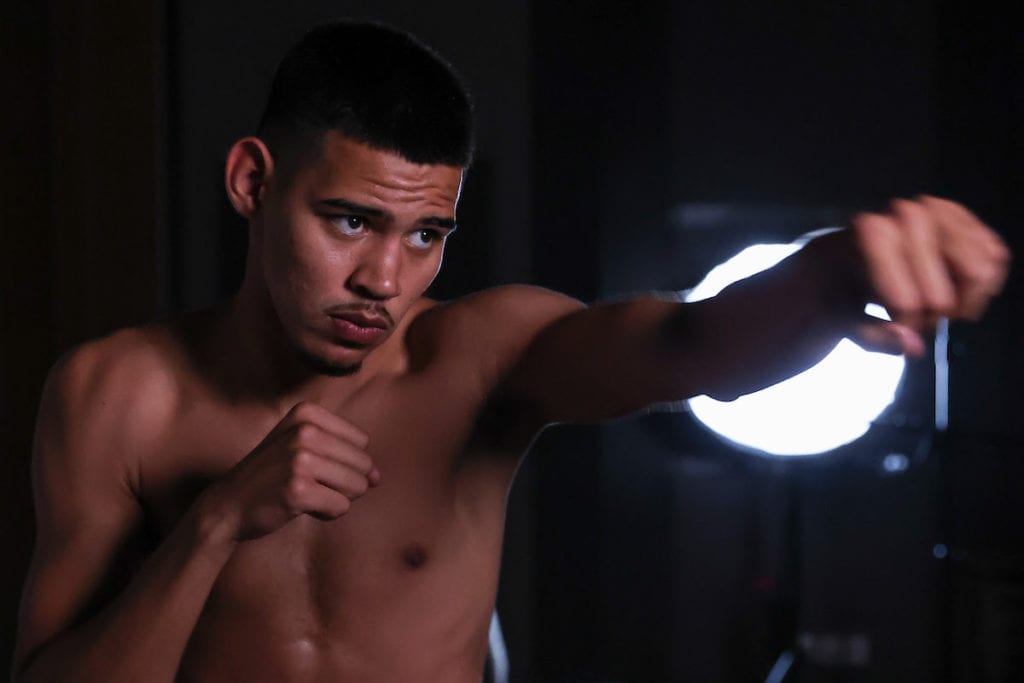 Diego Pacheco believes he’s the hottest young fighter in Eddie Hearn’s Matchroom stable, and he plans to prove it in style as he takes his spot on the opening event of Matchroom and DAZN’s new series of fight nights in Mexico with Canelo Promotions and Clase y Talento on Saturday night at the Dome Alcalde – CODE Jalisco in Guadalajara, live worldwide on DAZN.

Pacheco moved to 11-0 in February with a points win over eight rounds on the undercard of Canelo Alvarez’s win over Avni Yildirim at the Hard Rock Stadium in Miami, only the third time the 20-year-old has gone the distance.

Pacheco fights over eight rounds for the second time in the ranks on Saturday, taking on the unbeaten Jesus Moroyoqui Palomares (7-0-1 4 KOs), and Pacheco believes he has the chance to feature heavily on the new shows and prove that he is the next star to breakthrough at Matchroom.

“I have fought on Canelo cards and Anthony Joshua cards, and I was the smallest guy on the card,” said Pacheco. “I feel that this sort of show that gives me the chance to take over the night and show everyone that I am next.

“I always knew that I had what it takes to compete with anybody in the pro game. I’ve been going through the process slowly and I think that people are now recognizing that I am a talent and things like that, it’s pushing me to keep going because I know that I have a lot to learn and achieve in the sport, I’m so hungry and I want to show that I am going to be a World champion, and I want to fight for a World title when I am 22.

“I am not where I want to be but I happy with where I am going, I’m trusting the process and I know that nothing just happens overnight. I just have to stay dedicated; I have big dreams and a lot of other prospects that I get compared to are 24 or 25, people forget that I am only 20, I have a lot to learn, and I am not into my man strength yet.

“I think that at 21-22, people will see my full potential. I’m excited to be fighting on DAZN with the new Matchroom deal. It’s all over the world and I am going to get new fans watching me, so I want to put on a show.

“It was one of my toughest fights yet last time out, going through that has helped me in camp for this fight, I see things a little differently now. I’ve been sparring with Zurdo Ramirez in this camp, he’s got a fight soon, and here in LA you just meet at a gym at a certain time, and you all just work, so I am never worried about getting good sparring.”

There’s more World title action on the night with Cuba’s Daniel Matellon (11-0-2 6 KOs) making the first defends of his WBA World Light-Flyweight title against Jose Argumedo (24-4-1 15 KOs) with Matellon being elevated to full champion after landing the interim title in February 2020.

Gabriel Valenzuela (23-2-1 13 KOs) looks to build on his impressive win in London, England over Robbie Davies Jr in February by defending the IBF Intercontinental Super-Lightweight title he won that night against Juan Ocura (14-14-1 6 KOs), Christian Alan Gomez Duran (20-2-1 18 KOs) features on the card having recorded stoppage wins on two Canelo cards in December and May against unbeaten Jorge Sanchez (13-0 5 KOs).