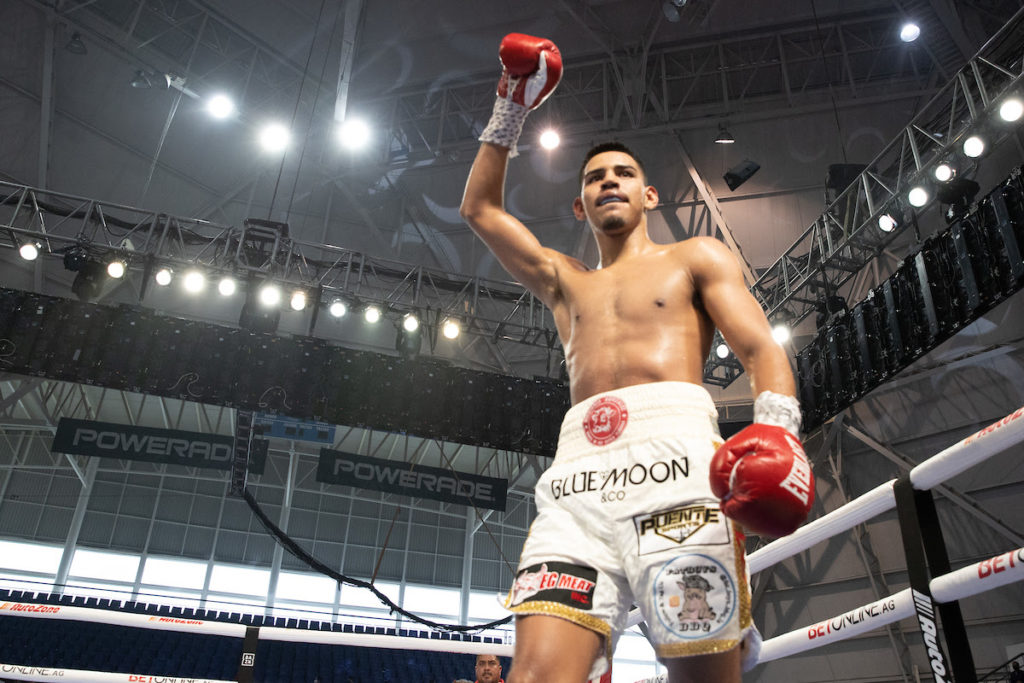 Matchroom Boxing continues to fill out the undercard for the upcoming trilogy showdown for Canelo Alvarez and Gennady Golovkin in September. And, this time it’s a rising, Southern California, super middleweight who will get his biggest stage, yet.

From their release Monday afternoon,

“Diego Pacheco has extended his promotional deal with Eddie Hearn and Matchroom and will fight for his first pro title when he meets Enrique Collazo for the WBC USNBC Silver Super-Middleweight title on the undercard of the trilogy clash between Saul ‘Canelo’ Alvarez and Gennadiy ‘GGG’ Golovkin at T-Mobile Arena in Las Vegas, Nevada on Saturday September 17.

The event, presented by Matchroom, Canelo Promotions and GGG Promotions, will broadcast live on DAZN Pay-Per-View in the U.S. and Canada as well as around the world on DAZN (excluding Mexico, Latin America, and Kazakhstan)​.

Pacheco (15-0 12 KOs) has been a revelation in the paid ranks, cruising to 15-0 and ending 12 of those fights inside the distance since turning pro in December 2018.

The 21 year old has already recorded two wins inside four rounds in 2022, with his last outing in June in Mexico his first over ten rounds, and now the rangy talent gets another first with a belt on the line in his second battle over ten.

In the opposite corner stands Collazo (16-2-1 11 KOs) the 2012 Olympian and six-time Puerto Rican National champion. The 33 year old also fights for his first title in Las Vegas and both men are excited to get the chance to land their first hardware on a blockbuster night in Sin City.

“I am very excited to be extending my promotional deal with Matchroom because they’ve done a great job working with me as a prospect and now it’s time to get into the contender’s conversation,” said Pacheco. “On September 17, I will be showing everyone once again that I am here to stay.”

“Very excited and grateful for the opportunity to fight on this card,” said Collazo. “It’s going to be another historic fight between Puerto Rico vs Mexico. Proud to be representing my Island and I am very confident I will win this fight.”

“I am delighted that Diego has committed his future to Matchroom,” said Hearn. “Diego has taken to the pro game so well and on September 17, he takes the next step with his first title fight.

“Enrique will provide a stiff examination, but I believe Diego will show what we see in him – a future World champion and a young man that will begin climbing the rankings in the second half of the year and be hot on the heels of the contenders at 168lbs.”

Pacheco’s clash with Collazo is the latest bout to be added to the huge Vegas bill, with Super-Flyweight sensation Jesse Rodriguez will defend his WBC World title against Israel Gonzalez as the co-main event and Austin ‘Ammo’ Williams taking on Kieron Conway for the vacant WBA International Middleweight title, all leading into the third installment of the classic modern rivalry between Canelo and Golovkin, with the Mexican king putting his undisputed Super-Middleweight crown on the line against Kazakhstan’s reigning WBA and IBF Middleweight ruler in the most anticipated match up of 2022.”