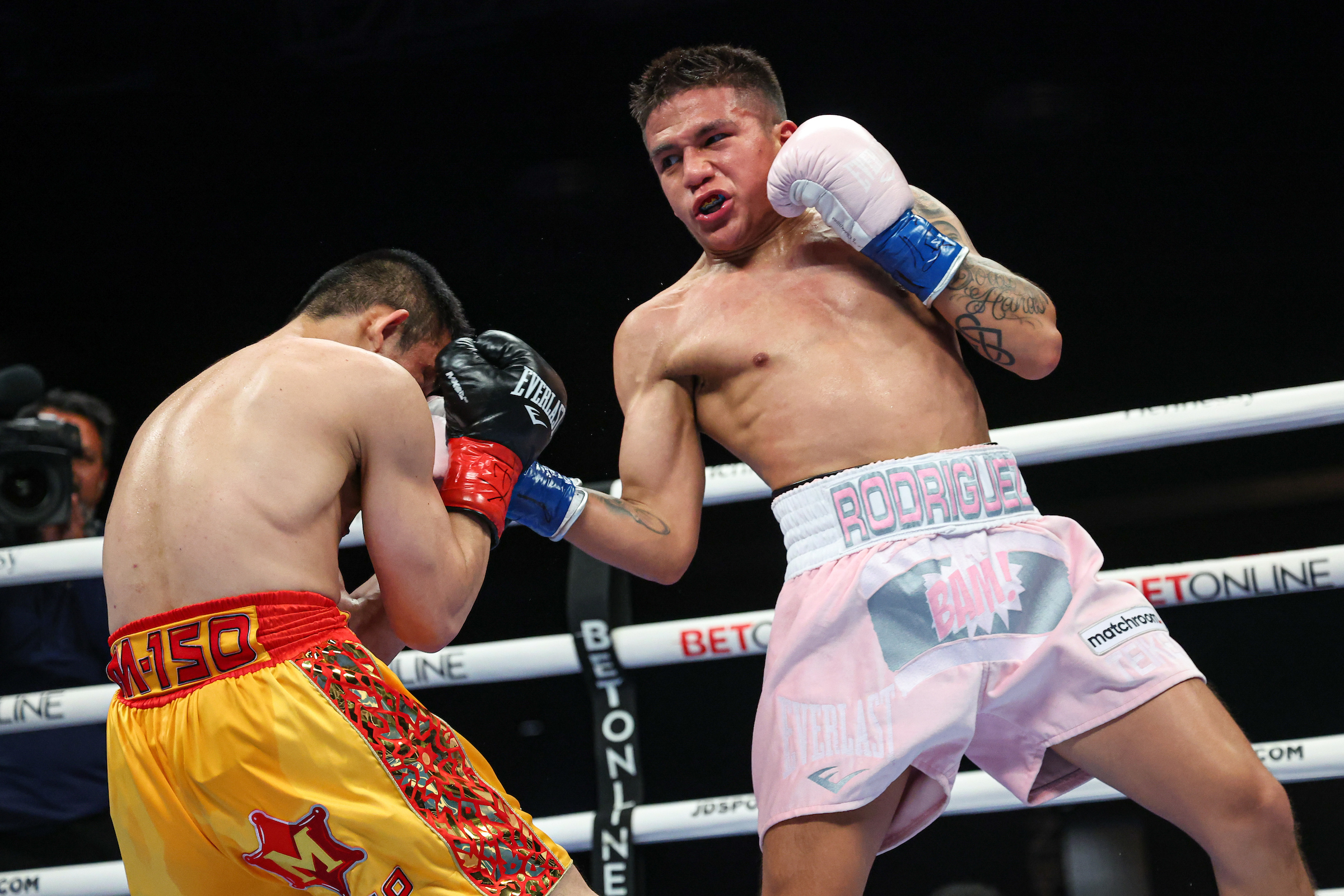 The star is on the rise for WBC super flyweight champ Jesse “Bam” Rodriguez and he’ll already be back in action in September on the undercard of Canelo Alvarez’s trilogy bout with Gennady Golovkin.

Matchroom Boxing and DAZN made it official Monday that Rodriguez will return to the ring after just having defended his title in late June and will fight veteran Israel Gonzalez in his latest defense,

From the Matchroom release,

“Rodriguez (16-0 11 KOs) is in red-hot form after a sensational stoppage win over Thai star Srisaket Sor Rungvisai on his San Antonio home turf in June, his eighth round triumph coming in the first defense of the title he won after stepping in late to meet Carlos Cuadras for the vacant strap in February in Phoenix.

‘Bam’ extended his promotional pact with Eddie Hearn following the win over Rungivisai, and he looks to strengthen his fighter of the year claims with another strong showing as he puts the green and gold strap on the line against Mexican Gonzalez (28-4-1 11 KOs).

The 25 year old challenges for World honors for the fourth time having previously faced Roman ‘Chocolatito’ Gonzalez, Kal Yafai and Jerwin Ancajas for belts at 115lbs, and the Mexican will lay it all on the line with huge support from the crowd on Mexican Independence Day weekend in Sin City.

“September 17, we are back,” said Rodriguez. “It’s an honor to be a part of this card and I want to thank Matchroom and Teiken for giving me this opportunity. Having the chance to fight on Mexican Independence Day weekend, as the co-main to Canelo-GGG is truly special and I plan on putting on another spectacular performance and continuing to build my legacy.

“Each fight now is more important than the last. It’s not about just winning; it’s how you win. That’s mine and my coach Robert Garcia’s job now; to look sensational each and every time we step in the ring and continue to show the world that I am one of the best pound-for-pound fighters on the planet.”

“I want to thank Matchroom but most I want to thank the champ Jesse Rodriguez for the opportunity,” said Gonzalez. “I know I’ll take full advantage of this and make my dream come true of becoming a World champion on September 17.

“Fighting on Canelo-GGG III card is a dream come true for Bam to showcase his talent to the whole world,” said Rodriguez’s trainer and manager Robert Garcia. “Thanks to Matchroom and Teiken for this huge opportunity. We will take this chance to show the boxing world that Bam is one of the most talented fighters in the world.”

“I am delighted to make Jesse the first fighter on the undercard of a spectacular night on September 17,” said promoter Eddie Hearn. “Jesse is the hottest property in the sport right now after his electric performances in the first half of 2022, and he’s looking to build on that on the biggest possible platform.”

Jesse Rodriguez’s clash with Israel Gonzalez is the first bout announced for the undercard of the hotly anticipated third installment of the classic modern rivalry between Canelo and Golovkin, with the Mexican king putting his undisputed Super-Middleweight crown on the line against Kazakhstan’s reigning WBA and IBF Middleweight ruler in the most anticipated match up of 2022.”