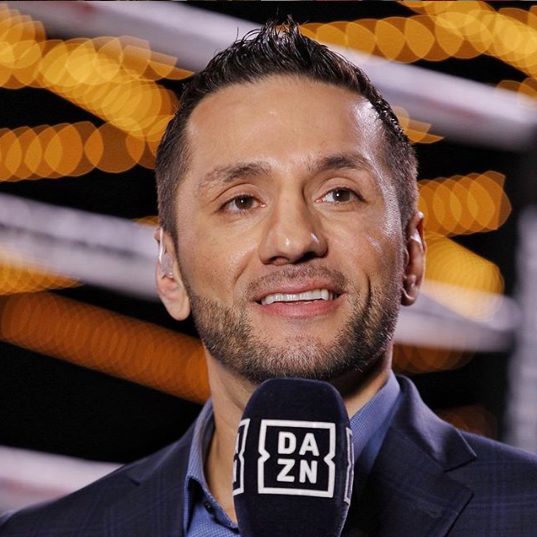 The countdown has begun for Saturday night’s WBA world light heavyweight title showdown in Las Vegas between champion Dimitry Bivol of Russia and Mexican future hall of famer, Canelo Alvarez. And, the lead analyst for DAZN streaming’s call of the bout, gave us insight on our podcast on how Bivol has to tactically try to win the fight with Canelo.

Sergio Mora, aka “The Latin Snake” joined us for Vegas in anticipation of calling the 12 round main event for Matchroom Boxing/DAZN Saturday night, and he says that the Russian’s jab will be arguably his only real way to victory. Hear more of Sergio by clicking play on the “Big Fight Weekend Preview” below

“Any boxing insider will tell you that Bivol is the second best jabber in boxing. Number one is (Gennady) Golovkin,” Mora said to us. “He’s taking a page from Golovkin’s book, who almost beat Canelo, two times. Some people might say beat him two times. He lands 11-12 jabs per round. Bivol 9-10. So, this is gonna be a ‘jab-fest’ on Bivol’s part….He has better foot work than Golovkin. So, I think his foot woork and ring generalship are going to cause a problem for Canelo.”

Now, Mora didn’t go so far as to predict the Russian to pull the upset, but he tell us that his size, youth and that jab should give Alvarez some issues in the early rounds.

As for the rest of the podcast, insider Dan Rafael of BigFightWeekend.com is with with me from Vegas and ready to preview it more. First Dan sets the stage of: what Canelo’s arrival, etc. this week has been like and how have the fighters handled the hype? Dan also has insight on Canelo’s mindset heading into his latest challenge at higher weight class.

Then, we have Dan’s  one on one conversation with Matchroom Boxing promoter Eddie Hearn. Hearn, who secured this fight and Alvarez’s subsequent one in September that would be with Triple G, gives insight into what he thinks will happen in the ring coming up. And, Hearn also has more on some proposed and announced fight cards coming from Matchroom later this Summer. This includes the possible site and date for the Oleksandr Usyk-Anthony Joshua heavyweight title rematch for July.

After the interview with Sergio Mora, Dan is back and he and I go over the odds and make predictions on the fight card, including what kind of shot does this Canelo-Bivol bout have of going deep, if not a 12 round decision? And, we take a look at the undercard fights from Matchroom, as well.

Hear it all on the “Big Fight Weekend Preview” podcast, as part of the BFW network. And, make sure you follow/subscribe to us on Apple Podcasts, Spotify, Google, etc.!!