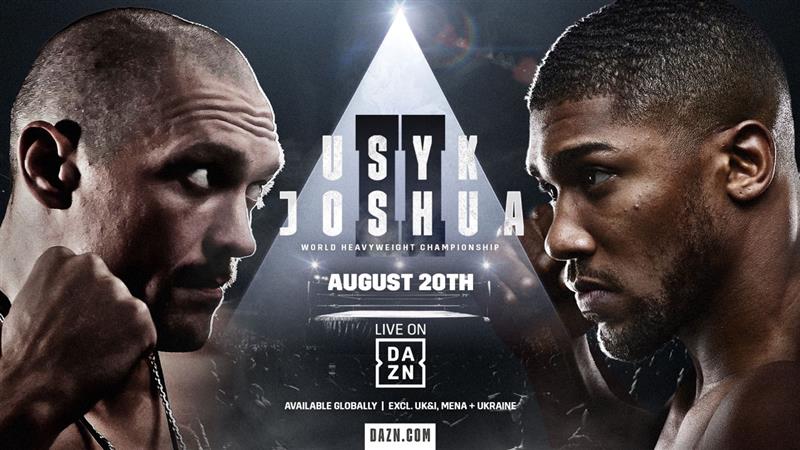 It wasn’t likely to have been a pay per view in addition to the DAZN streaming service subscription, but on Sunday afternoon the broadcast outlet confirmed that the Oleksandr Usyk-Anthony Joshua unified heavyweight title rematch will be available to their subscribers this Saturday afternoon in the U.S. without additional charge.

DAZN made the announcement on social media for the kickoff of “Rage on the Red Sea” in Saudi Arabia as Usyk-Joshua II is being billed,

We previously wrote in late July about the fact that DAZN will not being the broadcaster in the U.K. for Saturday night’s highly anticipated bout there for the Brit Joshua, but it will instead be a PPV for the popular Sky Sports who landed the rights to televise the showdown.

Sky made the announcement that just like the first matchup last September that saw the Ukrainian Usyk upset Joshua in a great 12 round performance London’s Tottenham Hotspur Stadium, they’ll have the call in the U.K. on a pay per view. And, the prominent European broadcaster will offer the late afternoon/early evening pay per view for Britain for $26 British pounds or about $31 U.S.

The move comes on the heels Joshua’s promoter Eddie Hearn and his Matchroom Boxing promotion having announced a new exclusive deal to use DAZN streaming for Joshua’s future bouts earlier this year.

But, Joshua, 24-2, 22 KOs, has been with competitor Sky Sports for his entire career, since turning pro in 2013 shortly after his Gold Medal win at the 2012 London Summer Olympics.

Usyk is also a former Olympic champion, as well as the former Undisputed Cruiserweight World Champion he stands at  19-0, 13 KOs with the signature win being the impressive, upset decision over Joshua in his backyard.

DAZN’s announcement Sunday also included that the title rematch will come off Saturday afternoon in the U.S. with the broadcast beginning at noon Eastern time and 9 a.m. in the Pacific time zone. The main event will likely begin around 4 p.m. Eastern.