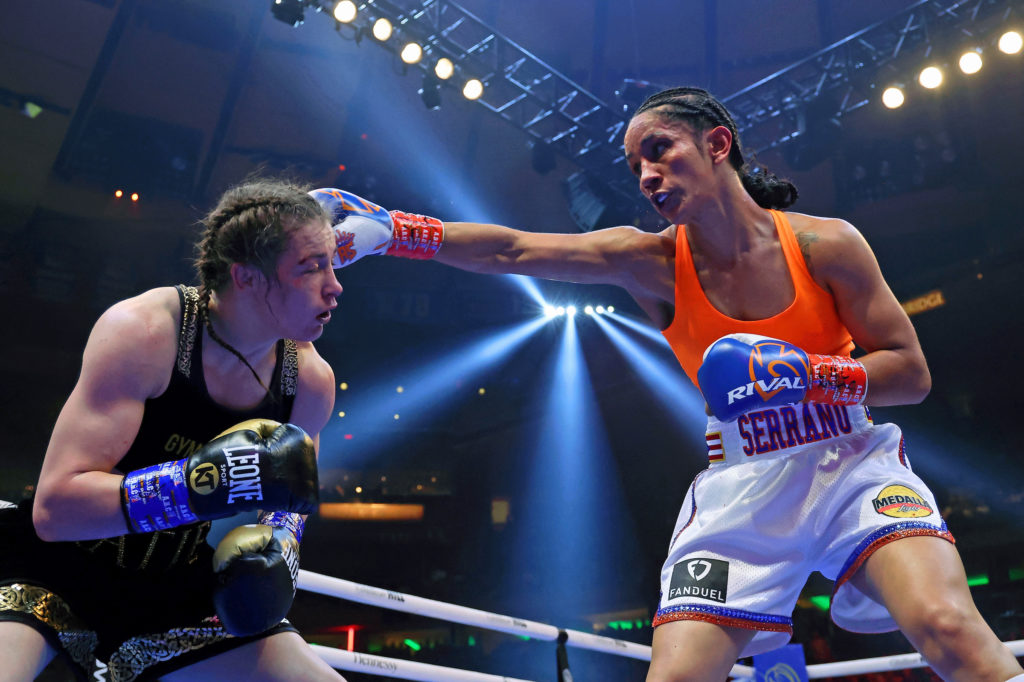 The massively significant win by Katie Taylor over Amanda Serrano Saturday night at Madison Square Garden in New York has another milestone for ladies boxing. This, as DAZN streaming announced Wednesday morning that the headlining battle for the undisputed lightweight title won by Taylor on a split-decision broke DAZN’s all time viewership record for a women’s boxing event.

The service made the announcement on social media that some 1.5 million viewed part of all of Taylor-Serrano’s tremendous battle,

#TaylorSerrano saw an unprecedented audience of 1.5M on DAZN to achieve a record-breaking viewership night for women's boxing 🤩

Fans tuned in on DAZN across 170+ markets worldwide to make the April 30 event the most watched female headlined boxing broadcast ever in history. pic.twitter.com/ZSD9ReqLmX

“#TaylorSerrano saw an unprecedented audience of 1.5M on DAZN to achieve a record-breaking viewership night for women’s boxing 🤩

Fans tuned in on DAZN across 170+ markets worldwide to make the April 30 event the most watched female headlined boxing broadcast ever in history,” the post said.

They streaming service had originally tweeted that the 1.5 million was their largest live audience for any event, but took down their posts just a few minutes later.

Nonetheless, the Taylor-Serrano hype paid off and more importantly, the fight lived up to it, as well. This as both ladies slugged and staggered each other over the course of the 10 round main event that over 19,000 in attendance at the most famous sporting venue in the world.

As we wrote in the aftermath, Taylor now 21-0, 6 KOs, found herself behind on the scorecards headed into the late stages of the fight. But, showing the heart of a champion, Taylor came on when it mattered most and gott the narrow decision win.

This came on scores of 97-73, 96-93 for Taylor, who defended her titles for the seventh straight time as undisputed champ. Meanwhile, the one dissenting judge had it 96-94 for Serrano.

Serrano, now 42-2-1 and the unified featherweight world champion, was clearly the better fighter in the first half of the fight taking control from the southpaw stance with straight right hands and lefts behind it. Her best round with the 5th, when she repeatedly rocked Taylor with combinations, staggering the champion and causing the crowd to roar in excitement for the first of several times on the night.

Serrano was not able to put Taylor down, but had clearly demonstrated she had the power to do so. Serrano stayed active in the sixth round, again scoring with straight left hands and seemed to have built a comfortable lead to that point in the fight. But, that’s when the Irish former Olympic Gold Medalist responded from the seventh round on, especially.

Taylor was landing with lead right hands as Serrano appeared to be wearing down and her punch output dwindled in the final third of the bout. Taylor took advantage being a more aggressive fighter scoring with combinations, including hard right hands. The champion fought like it in the 10th and final round backing Serrano up with hard rights and lefts and cutting her right eye. Thus, making a final key impression on the judges.

And, in the end the Irish hero got the nod on two of the three judges cards by winning all three of the final rounds of the fight on all three cards.

It’s all but assured that Taylor will give Serrano an even more lucrative rematch, likely in the U.K. later this year.

Both ladies made a guarantee of seven figures for their main event last Saturday, which was also a first for ladies boxing.