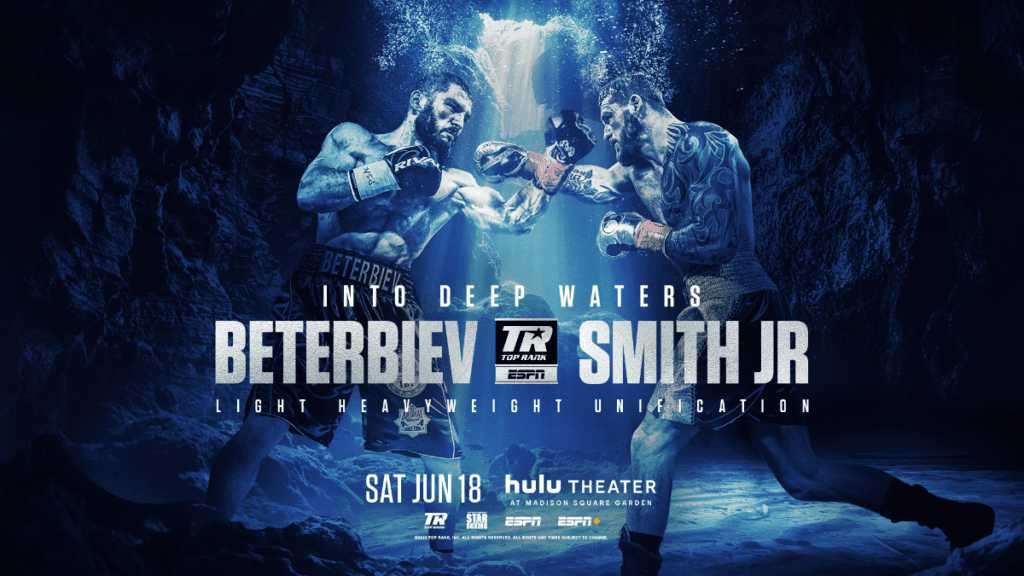 With future hall of famer Canelo Alvarez looking to capture the WBA world light heavyweight title against unbeaten champ Dimitry Bivol Saturday his main motivation being to become undisputed at 175 lb., we now we know the date that the two other light heavyweight world champs, Artur Beterbiev and Joe Smith will clash.

Top Rank Boxing announced Wednesday that the WBC/IBF/WBO clash between Beterbiev vs. Smith will happen June 18th at the Hulu Theater adjacent to Madison Square Garden,

Beterbiev, boxing’s only world champion with a 100 percent knockout rate, hopes to pick up another strap against “Cinderella Man” Smith, a Long Island native who grew up about 70 miles from Madison Square Garden.

“Beterbiev versus Smith is one of the very best fights that can be made in boxing, two huge punchers fighting at Madison Square Garden in what will be an electric atmosphere. Whoever comes out on top will be the true king of the light heavyweight division,” said Top Rank chairman Bob Arum. “Robeisy Ramirez has developed into a sensational pro, and he will have his hands full against a tough, undefeated kid in Abraham Nova. The winner will be in line to fight for a featherweight world title.”

As we wrote previously, Beterbiev has 17 Knockouts in his 17 pro wins with the Russian having defeated American Marcus Browne in December by 9th round TKO, in his latest “stay busy” Unified title defense. Beterbiev now lives and trains out of Quebec, Canada, but has also fought previously on the East coast of the U.S., as well.

“I look forward to the challenge ahead of me. Joe Smith Jr. is a worthy champion, but I am coming to Madison Square Garden to add another world title to my collection,” Beterbiev said in the release. “This fight will get me one step closer to becoming undisputed champion.”

As for Smith, he’s 28-3, was last in the ring in December, when he scored a 9th round KO of late replacement Steve Geffrard in Verona, New York. Geffrard from South Florida, took the fight on eight days notice after Britain’s Calum Johnson had tested positive for Covid-19 nullifying him from the title shot. Smith previously won the WBO belt with a narrow decision win over another Russian, Maxim Vlasov.

“I am extremely excited and focused on this task I have ahead. Facing Beterbiev is huge. It is going to be a fight that fans remember forever, with two of the biggest punches in boxing today facing off. This opportunity is a dream of mine to accomplish. Fighting with three titles on the line is one step closer to becoming undisputed.”

As for Canelo, he is slated to battle Gennady Golovkin this Fall, but he is victorious Saturday and in that fight, then he will towards the Beterbiev-Smith winner in the first part of 2023.