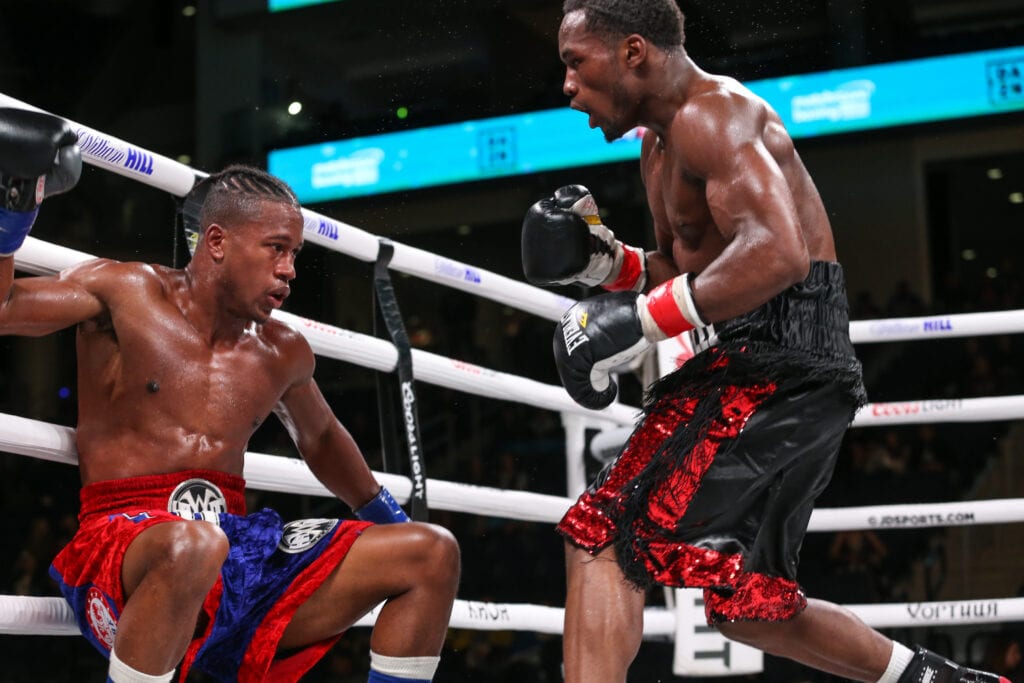 Day escorted to hospital after fight with Conwell

Scary scene in Chicago as Jr. Middleweight Patrick Day was stopped by the hands of Charles Conwell to open up the DAZN stream of the Usyk-Witherspoon card. Highlights and video of this fight were taken off the DAZN Youtube page and anyone who had images of the bout was hit with copyright claims.

Conwell (11-0, 8 KOs), from Cleveland, had been in control of the fight, dropping Day with a right in the fourth and eighth rounds before landing two rights and a left hook that knocked him out cold in the 10th round. That led to referee Celestino Ruiz to wave off the fight at the 1:46 mark.

Day was down and out on his back for several minutes while being given medical attention and was eventually taken out of the ring on a stretcher and to the hospital. He remained unconscious as he was taken to an ambulance and then, suffered a seizure before arriving at the hospital emergency room for treatment, according to sources to ESPN.

During the DAZN broadcast, the updates didn’t fare any better. as they only mentioned that more than an hour later that Day had not regained consciousness and was on breathing tubes.

Meanwhile, Conwell looked impressive in this contest but all thoughts and well wishes were on to Day after the fight. Conwell speaking to iFL Tv wished just as much.

“I give my blessing and concerns to Patrick Day”, Conwell said to iFL TV. “Shoutout to him and his team and I hope he’s okay.”

Rafael further reported overnight Sunday morning that Day is in critical condition at Northwestern Hospital not far from where the fight took place at the Wintrust Arena. Rafael further reported that according to a source close to Day, he had surgery, was placed on breathing tube and in a coma, although it’s not clear if the doctors put him in that coma medically to reduce brain swelling.

Day’s serious situation is an awful reminder of Russian Jr. Welterweight Maxim Dadashev’s death days after a massive brain injury suffered in his July loss to Subriel Matias on an ESPN/Top Rank show in Maryland.