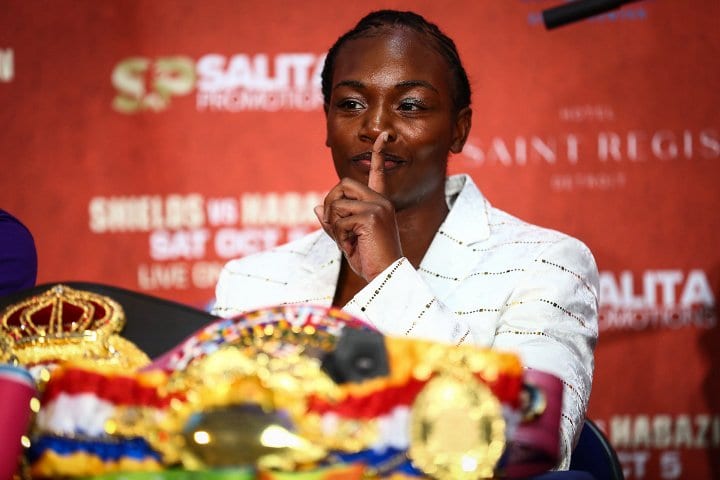 With momentum continuing for women’s boxing and title fights, one of the highly anticipated ones for the remainder of 2022 appears to be set. This after promoter Ben Shalom confirmed that WBO champ Savannah Marshall and WBC/WBA/IBF title holder Claressa Shields have both signed to meet for the undisputed ladies middleweight championship in England in September.

Shalom gave Sky Sports the confirmation and some specifics here,

BREAKING! Savannah Marshall and Claressa Shields have signed to fight each other in an undisputed middleweight world title clash in early September 👊🏼💥

From the Sky Sports item,

Shields had threatened to walk away from the bout after arm surgery for WBO title-holder Marshall saw it pushed back from a planned date in July to September, but Shalom says the American has now put pen to paper.

Marshall, who dismissed Shields’ claim that she has been exaggerating her injury to buy “extra time”, has also agreed on the clash, which promises to be the biggest women’s fight of all time to take place in the UK as the unbeaten duo go head-to-head.Early September – both fighters are ready, both fighters are signed,” Shalom told Sky Sports News.

“Claressa has finally got her match. It’s the first time we’re seeing a genuine rivalry in women’s boxing, and that’s a sign of the times.”

The fight had previously been expected to take place in Marshall’s hometown of Newcastle, but Shalom has revealed that excitement around the event may see it take place in London due to a need for a larger venue.

“We are very close to finalising the venue,” Shalom added.

“The fight’s got so big now that it needs an international venue. It will happen in the UK – all the venues want it.

Shileds, 12-0, 2 KOs, made the third defense of her Unified Middleweight titles in February, when she defeated Ema Kozin by 10 round decision. Her bout was be the co-main event from Cardiff in Wales, on the undercard of star U.K. middleweights Chris Eubank Jr. and Liam Williams meeting.

Marshall is also 12-0, but with 10 KOs, including a thunderous knockout of Femke Hermans in the third round in Newcastle in April.

Besides the undisputed reward that’s out there, Shields wants revenge from Marshall having defeated her when they were amateurs at the 2012 World Championships. Shields did go on to win the Gold Medal in both the 2012 London and 2016 Rio Summer Olympics with Marshall having never qualified to face her.

Now, the two appear ready to go for a massive lady title fight in the U.K. for this Fall.