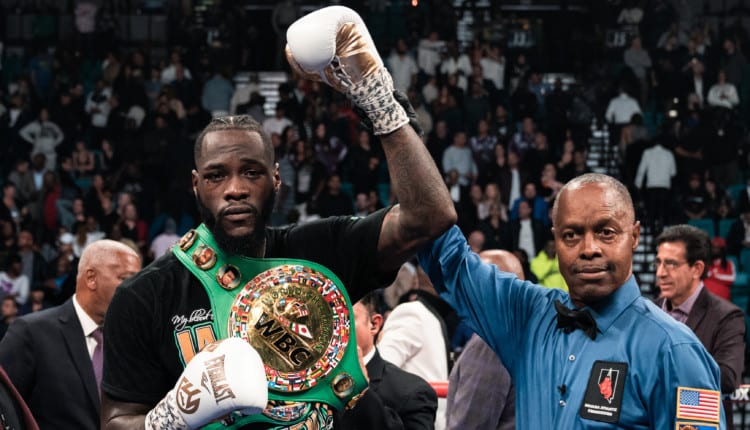 Deontay Wilder At Statue Unveiling- “Must Continue My Journey”

On Wednesday afternoon in his hometown of Tuscaloosa, AL, former WBC heavyweight champion Deontay Wilder had a life-sized, statue unveiled in honor of his career and ties to that community. And, the man nicknamed “The Bronzed Bomber” briefly answered the question of his potential return to the ring publicly for the first time in a while, saying he intends to come back.

“I can’t stop right here. I must continue my journey. I have to. I have to,” Wilder told a gathering of his fans. That update is in interesting one, as Wilder has been largely absent from the public eye since his October second defeat at the hands of Tyson Fury.

Fury delivered a thunderous KO of the now 36 year old Wilder in the 11th round of their trilogy fight in Las Vegas that saw both of them knocked down multiple times. In the end Wilder was beaten and humbled, again, by the Englishman Fury, who basically dominated him in all three of their meetings (their December 2018 bout was ruled a draw).

As we wrote back in February, Wilder has taken some time away from the sport/limelight to evaluate his next move. And, as part of that process, he openly discussed utilizing a psychedelic drug as part of a mental and physical “restart.”

Wilder talked about it on the podcast of former L.A. Lakers basketball champion player and NBA coach, Byron Scott. And, he relayed then, that he is looking to possibly be back in the ring later this year. However, he was going try the psychedelic drug Ayahuasca in a drink mixture, as part of mind and body cleansing.

Wilder said on the show three months ago,

“I’m thinking about doing Ayahuasca. That’s gonna be my decision making process,” Wilder told Scott. “Ayahuasca is something you take in a spiritual journey, you’re using DMT and stuff like that.

I’ve been really interested in that, getting shamans and stuff like that, I wanna go down this journey, this path… It’s gonna help me navigate my decision making of whether I wanna return to the sport or not.”

Ayahuasca is a South American plant-based psychedelic brew which, when drank, causes an altered state of consciousness (or ‘high’) and can induce visual hallucinations or altered perceptions of reality.

The active chemical in Ayahuasca is DMT (dimethyltryptamine) – a hallucinogenic drug that’s illegal in most countries.

And, that is the case in the U.S. as this site relays in part,

“DMT is federally illegal in the U.S. under the Controlled Substances Act of 1970, and it is officially a Schedule 1 drug. This classification means that possession and intent to sell can carry both a lengthy sentence and a hefty fine.”

However, there are religious and political exemptions made in the U.S. Still, it appears that if the “Bronze Bomber” followed through, he would have been out of the country to do so.

It’s unclear, as Wilder hasn’t followed up publicly, whether he followed through with what he was talking about three months ago, or if he did, if it helped him.

However, back to Wednesday, the man who held the WBC heavyweight title for five years (2015-20) looked in great shape and was obviously in tremendous spirits for the statue unveiling.

Now, the question becomes: if Wilder returns later this year, who’s the opponent?

Premier Boxing Champions, the outlet he’s fought under since the rise of his career began seven or eight years ago, has several significant heavyweights that he could battle. A speculative name that keeps coming up is Robert Helenius.

The 38 year old veteran has most recently scored another rematch KO of Adam Kownacki back in October on the undercard of Fury-Wilder III. He had stunned the previously unbeaten Kownacki in February 2020. The win last October was Helenius’ sixth in his last seven bouts and brought the veteran’s record to 31-3, 20 KOs. So, that would be a very attractive opponent for Wilder to battle.

Now, after having made over $60 million for the two previous Fury bouts, and having a statue dedicated to him, we will find out how much desire Wilder has to be back against anyone.