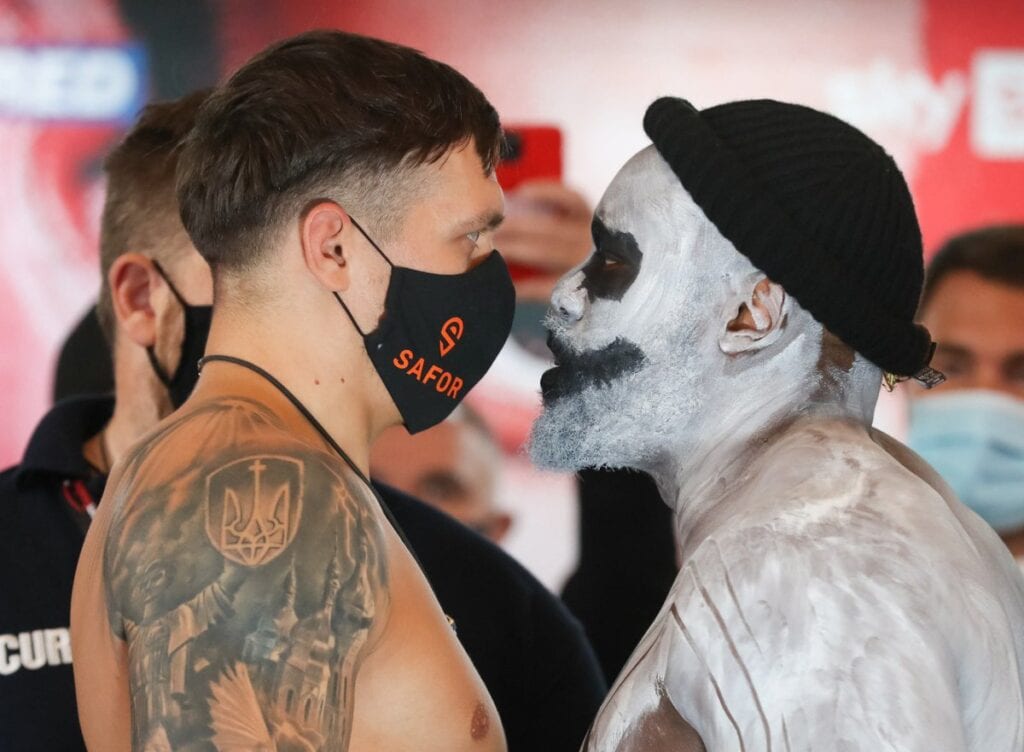 We’ve known for years that English Heavyweight contender Dereck “War” Chisora has been a high strung and at times half-crazy, self promoter of his fights, but he may have topped himself Friday prior to his 12 round showdown with Oleksandr Usyk in London.

This after Chisora came to the official weigh-in decked out in white paint on his upper body and face with his “WAR” nicknamed inscribed, as a “Zombie-like” monster. And, then he proceeded to have a classic Halloween stare down with the former Undisputed Cruiserweight champ after they stood on the scales,

For the record, Chisora weighted 255 lb. and as expected, Usyk came in much lighter at 217 lb. for the contest that will solidify the WBO #1 Heavyweight ranking spot.

The big punching, 36 year old, Chisora is 32-9 and hasn’t won a really significant fight, since Dillian Whyte knocked him out in December of 2018, but his still has hopes to pose a threat against the unbeaten Usyk in the O2 Arena in London.

For his part, Usyk, 17-0, 13 KOs, won his first heavyweight bout last October against 38-year-old last-second replacement, Chazz Witherspoon in Chicago by 7th round TKO. He previously won the Undisputed  Crusierweight World title and the “World Boxing Super Series” tournament and by defeating Russian Murat Gassiev by decision, also, in July of 2018.

The showdown has been delayed for five months from it’s original May date due to the Covid 19 pandemic, as Matchroom Boxing waited for awhile to see if some fans could be present. Alas, that will not be the case Saturday night.

Usyk is heavily favored to win and put himself in position to possibly fight Unified Heavyweight Champ Anthony Joshua sometime in 2021. Joshua will fight Bulgarian Kubrat Pulev in December, also at the O2 in London.

Meanwhile, will “WAR” do more than cause a spectacle Saturday night? Time to find out if he was “trick or treat” on Friday.