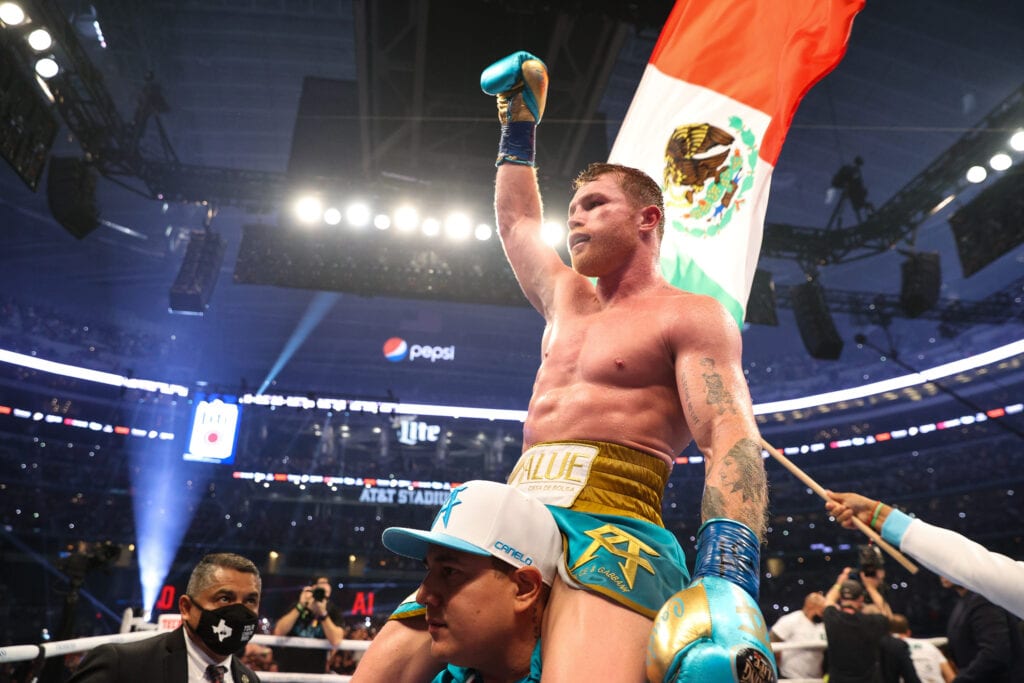 Canelo-Plant Talks Stall- What Next?

Not much in the world of boxing happened on Tuesday, except the contract talks between Canelo Alvarez and Caleb Plant stalled over contractual disagreements, for the time being, halting the Undisputed title match at super middleweight.

Mike Coppinger over at ESPN reported Tuesday the fight that was supposed to happen on September 18; in Copp’s words “at the 11th hour, talks have broken off over disagreements in the contract. The contract was passed back and forth between Alvarez’s team and Al Haymon’s Premier Boxing Champions over the weekend, and after multiple edit requests, the deal collapsed over the stalemate.”

Hear us discussing Canelo, his next fight, etc. on the latest Big Fight Weekend podcast by clicking below,

Caleb Plant is also quoted in Coppinger’s piece and laid out that Premier Boxing Champions (PBC) looked to offer what they could, which seemed still not enough.

“His bark is bigger than his bite,” Plant told ESPN during a phone conversation Tuesday evening. “Canelo was offered the highest guarantee of his career: He was set to make $40 million-plus Mexican TV rights and his Hennessy Sponsorship. No problem, let’s fight. We gave it to him. Then they wanted upside of gate and PPV revenue; no problem, let’s rumble.

“It was always agreed that it was a [title] unification; no rematch for either fighter. Towards the end of negotiations they asked for a rematch when they lose. No problem, you can have the rematch as well, I wanna fight.”

My big concern is for Caleb Plant.

Who is he going to face now off that IBF eraseboard if Canelo is off the table? #Boxing

Oh, it gets better, much better, as we wrote Tuesday night, Plant laid out some of the “ridiculous requests” put in for the fight even to happen.

“One that is absurd: If I get injured or sick, then he gets a late replacement for the same amount of guaranteed money, but if he gets sick or injured, then we gotta wait for him,” Plant added. “We’re at seven-and-a-half weeks from the fight; we’ve lost valuable time that should be spent promoting and drug testing for a fight of this magnitude.

Plant went on to add that he feels that Canelo didn’t want the fight.

“I question whether legacy or money is their real motive. We’ve been waiting for him to get done with his wedding, shooting his TV show, his golf tournament, and now have tried to give him everything he wants and more to make this fight. I’m more than willing, able and ready to fight Canelo Alvarez on any date. Those are the real facts and if anyone has something to say differently, we have the paperwork to prove it.”

Is this fight dead? Based on this standpoint, it sounds like they’ll have your total at the window, but of course, it’s boxing and it was a tweet that Steve Kim reminded me of today that the talks aren’t over until another agreement is signed.

That other agreement? Maybe we finally get that Canelo-Gennady Golovkin third fight. Save your groans and let me remind you that Golovkin is ready, willing, and available should the opportunity should become present. It sounds like it just may Canelo should go that route next.

But what about Plant? It’s a question I asked on social as we know that Plant has been waiting and waiting and now looks to be without a dance partner. The easy joke I’m supposed to make here is Plant-Mike Lee 2 or Plant-Feignbutz 2 here, but I was on the internet asking for real answers, and opponents away from the IBF erase board the undefeated Plant has been taken care of.

The only name of note that comes to mind is “The Dog” Anthony Dirrell. A name originally touted right after Plant’s unanimous decision win over Caleb Truax back in January. Dirrell himself was last seen in a split decision draw against Kyrone Davis.  You don’t need me to tell you that Plant-Dirrell isn’t as big as a Canelo fight, but the former two-time champ from Flint, Mich. would be the biggest win for Plant to those who question fight resumes.

The plant was done dirty in this if this fight is off, by the way. However, it’s Canelo’s world in boxing, and to get the pound-for-pound champ, you have to bow down to all of his rules. Even though I think some of these that Plant laid out is unreasonable.

Or this can all be resolved, and we get Canelo-Plant made official by the weekend, welcome to public boxing negotiations, 101 everybody.