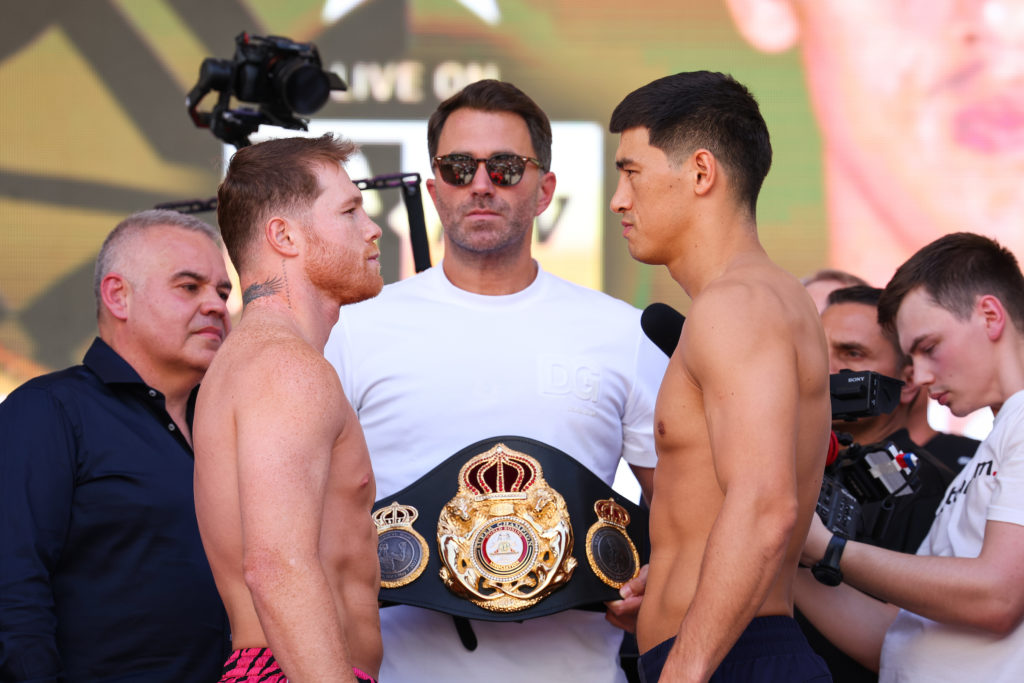 Canelo-Dmitry Bivol Both Come In Under Light Heavyweight Limit

LAS VEGAS – As they have been throughout the promotion, pound-for-pound king Canelo Alvarez and Dmitry Bivol were all business at their weigh-in before thousands of mostly Canelo fans on a steaming hot Friday afternoon in front of T-Mobile Arena.

Both appeared to me in immaculate condition as they both came in under the limit for their showdown, which will take place inside the arena on Saturday (DAZN PPV and PPV.com, 8 p.m. ET).

Bivol (19-0, 11 KOs), 31, of Russia, who will defend his WBA light heavyweight title for the ninth time, weighed in first and was 174.6 pounds, a hair under the 175-pound division limit. Alvarez was next up and was 174.4 pounds.
Then they faced off with stone faces and no much as a hint of concern they might engage in any trash talk or pushing and shoving. “First time I see a lot of Mexican fans against me,” Bivol said moments later as the crowd chanted, “Mexico! Mexico! “

“I’m here listening to the crowd,” Bivol continued. “This is my dream All my life I am in boxing and I won many times and why shouldn’t I win this time? I am focused only on the fight. Only making a great fight for people, for boxing fans. I don’t think about what will be after the fight, what will be on May 8. I don’t have any plans. I only have plans on the fight. I will try to make a great fight.”

Bivol is the underdog against Alvarez, the undisputed super middleweight champion and boxing’s biggest star, who is returning to the light heavyweight division seeking to win a world title there for the second time.
In Alvarez’s only other light heavyweight fight, he brutally knocked out Sergey Kovalev in the 11th round in November 2019 to win the WBO title he later vacated. Alvarez weight 174.5 pounds for that fight.

Alvarez (57-1-2, 39 KOs), 31, looked out at the sea of his adorning fans and said how happy he was to be fighting on Cinco de Mayo weekend, a traditional date for his fights.

“I feel proud to represent my country this weekend. I feel very excited,” Alvarez said.

Bivol is viewed my most as his toughest challenge since he left the middleweight division in 2019.
“I like this kind of challenge. Expect everything from me, like always,” Alvarez said. “I’m gonna try my best and do my best in the ring and, of course, we’re gonna win. (My fans) make me feel so happy, motivated, everything. Viva Mexico! I am so happy.”