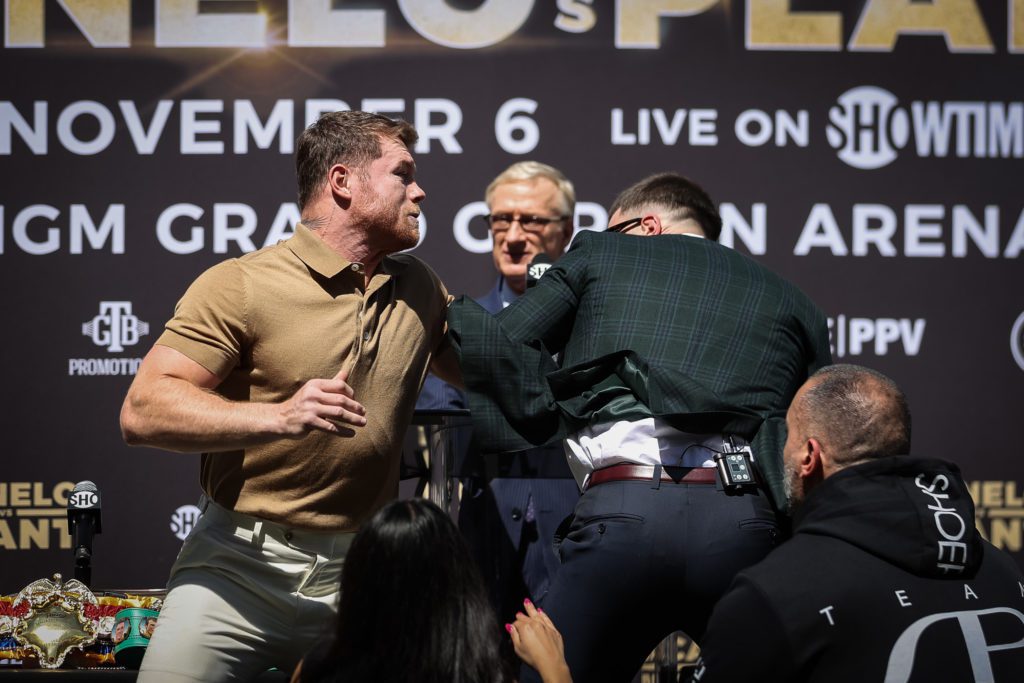 So much for fighters, who don’t want to promote their bouts. Tuesday afternoon in Los Angeles, Unified Super Middleweight champ and future Hall of Famer, Canelo Alvarez, and unbeaten IBF 168 lb. champ, Caleb Plant, were part of the kick-off press conference for their upcoming November bout. And, things not only got heated verbally, then got physical with swings from both men.

Here’s the video of the typical staredown that quickly escalated into a Canelo shove, followed by Plant swinging a “slap punch” at the four division world champ,

Heated face off here before the #CaneloPlant press conference 🤯😳

For those that might believe that this was somehow simply a staged “set up” only, Plant did suffer a significant gash under his right eye possibly the blow by Alvarez striking his sunglasses into his upper check bone.

ESPN’s Mike Coppinger tweeted this photo of Plant from the front row, and makes a legit point that the cut would be more significant, if it was closer to fight time,

Mike Coppinger was shocked after seeing the cut Canelo opened up under Caleb Plant’s eye 👁 pic.twitter.com/MSEUyfUmnK

It was interesting that the staredown happened before the actual comments from the fighters took place. Usually, it’s reserved as the last part of a boxing press conference and for photographer and videographers to get extra pictures and footage of the fighters.

For his part, Canelo made clear several hours later that Plant had said something about his mother (and it likely wasn’t pleasant) to trigger his shove,

Don’t talk about my mom. pic.twitter.com/f1HQlEfUUE

All parties had wanted the bout to have been this past weekend in Las Vegas, as part of the end of the “Mexican Independence Day” weekend celebration. However, after walking away from the negotiating table Alvarez eventually came back and did the deal for November 6th.

And, you can’t say that there wasn’t interest already created by the events, out of the ring, that will build the drama towards the Undisputed battle coming in about six weeks.

Joe Smith Jr Bout Postponed Due To COVID-19
Canelo-Plant: The Most Talked About IBF Mando Ever
Advertisement
To Top