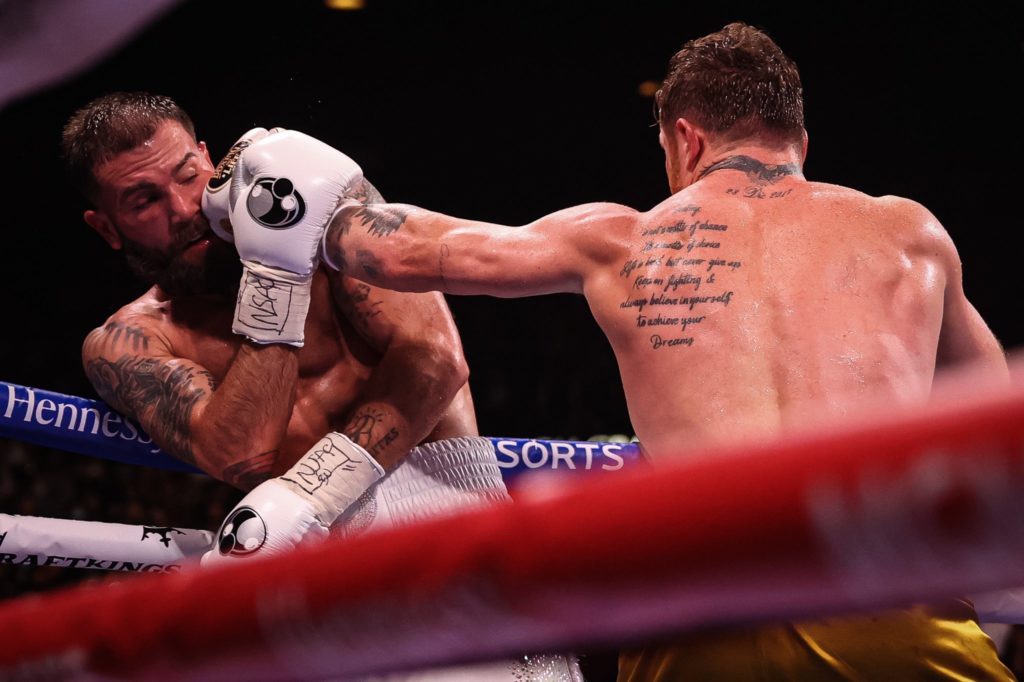 We have for the first time in the four-belt era an undisputed champion at Super Middleweight as Canelo Alvarez defeated Caleb Plant by eleventh round stoppage decision Saturday night.

The official time of the stoppage was 1:05 in the eleventh round.

The main event bout that aired on Showtime pay-per-view from the MGM Grand Hotel and Casino in Las Vegas in front of 16,586 fans witnessed another tremendous boxing display by Alvarez.

The first round was a feeling out round as it started out with Plant was sticking with his jab while Alvarez, who already owned the WBC/WBA and WBO 168 lb. belts, looked to keep within range and kept Plant towards the ropes. Nothing significant in terms of action. This picked up in the second round as the IBF titleholder Plant threw a left that got his attention early on in the fight.

It was apparent that Plant was going to stay moving while Alvarez walking him down.

After the third round, there was a visible cut under the right eye of Plant, now 21-1, resembling the same mark he received from Canelo Alvarez, now 57-1-2 37 KOs, back in September to start the promotion of the fight. Felt like a very even fight after four rounds. Partly cause both fighters were able to maintain their ground early on. The sixth round was when Alvarez started it looked to pour it on a little more than in the ring and was starting to take control. The seventh-round for Plant was telling as he was only throwing shots one at a time against Alvarez.

The end of this contest was the eleventh round as Plant was sent down flush with a right uppercut followed by a left hook and from there this fight was over. Caleb Plant beat the ten count of referee Russell Mora but was sent reeling moments later and down for the second time in the fight and this fight was ruled over.

The win puts Canelo in complete control of the Super Middleweight division. And, it will be interesting to see if he ends up fighting former WBC 168 lb. champ David Benavidez or potentially, have WBC Middleweight champ Jermall Charlo move up a class to fight in what would be another very marketable PPV bout.